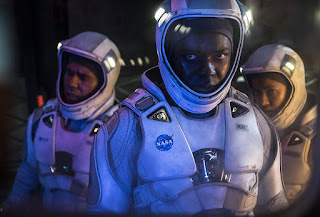 I'm guessing that this is supposed to be a prequel to Cloverfield (2008) that's maybe supposed to explain where the huge monster came from. Perhaps, it's not satisfying to accept in King Kong (1933), Godzilla (1954) or even Pacific Rim (2013) that huge monsters can just appear out of nowhere and their origins don't matter, or if you want their origins to matter, then make them matter, which is what the movie Colossal (2017) tried to do. This movie is really a roundabout and bizarre way to explain how the monster in Cloverfield ended up on Earth. It's as much of a failure as Prometheus (2012) and Alien: Covenant (2017) were in their attempts to explain the origins of the so-called Xenomorph. The origin here is ultimately gobbledygook for gobbledygook's sake.

At first, it seems like this movie was going to do the same thing as 10 Cloverfield Lane (2016). That movie wasn't a sequel or prequel. It simply took the Cloverfield name and used it to tell a different story. It wasn't as experimental, but it was a claustrophobic thriller that worked as such, until the very ending ruined it by attaching a non-sequitur, science-fiction capper that was simply ridiculous and unneeded. At first, I thought this movie was going to do that. It was going to pick up on the science-fiction aspect and proceed to be a claustrophobic thriller but without attaching that non-sequitur. Unfortunately, the problematic ending of 10 Cloverfield Lane exists here too, but instead of being a hard, left turn into a totally different genre, this movie tries to pull off what M. Night Shyamalan did in Split (2017) but crashes and burns. 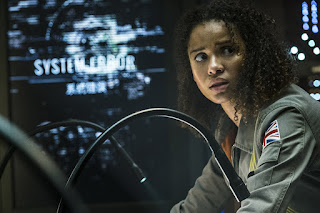 Gugu Mbatha-Raw (Belle and Beyond the Lights) stars as Ava Hamilton, a woman who is an astronaut aboard a space station orbiting Earth called the "Shepard." It's like the International Space Station but way more advanced. Its crew consists of people from various countries, including China, Russia, Europe, Latin America and Africa. They're on board because the Shepard is supposed to possess this great particle accelerator that can create unlimited energy that can help people on Earth who are suffering a severe and extreme, global, energy crisis.

The movie presumes a shortage of fossil fuels. Yet, there is no explanation as to why solar or nuclear energy isn't being used. We're supposed to suspend disbelief in that regard. It's not even clear how the Shepard is meant to deliver whatever energy it creates back to Earth. Writer Oren Uziel (Shimmer Lake) and Doug Jung (Star Trek: Beyond) apparently don't care about that. All they care about is finding an excuse to get a diverse group of people up in a space ship, so this movie can be a derivative knock-off of every other, trapped-in-space movie that has ever been made.

If you've seen Alien (1979), Event Horizon (1997), Lost in Space (1998), Gravity (2013) or Interstellar (2014), then you've basically seen this movie. This movie essentially goes through every trope laid down in those movies or movies like them and plays them beat-for-beat in the most predictable and uninspired way imaginable. All of that would be forgivable if it were scarier or more thrilling, or if it utilized its sci-fi ideas in more clever ways. Instead, it swings from bits that you'd find in The Addams Family to plot points from ABC's Lost to ideas from Coherence (2014), an independent film in one location that deals with parallel dimensions a million times better than this.

The marketing and production history of this movie are particularly notable though. Uziel's script was purchased in 2012. It was purchased at Paramount Pictures where it was being developed as part of a Cloverfield franchise, an anthology series they were building. The movie was filmed in 2016. The release date was delayed several times and the post-production budget increased the cost of the film by a factor of 8. Paramount ceased to think the film would be profitable if released in theaters, so the studio sold it to Netflix. Netflix decided to do a surprise ad during Super Bowl LII and then make the movie available that Sunday night. Normally, Netflix releases new titles on Friday, but obviously the streaming service wanted to use the biggest TV event of the year to push this pricey picture. 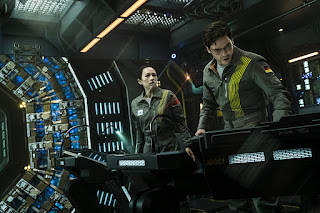 It also has to be noted that the director of this film is Julius Onah, a Nigerian filmmaker. The film stars Mbatha-Raw, a black woman from England, and the entire film features various people of color like David Oyelowo, a fellow black Brit, John Ortiz who's Puerto Rican and Ziyi Zhang who's from China. The cast of Sunshine (2007) also had a diverse cast, as has other outer space adventures recently, but the difference here is that a black woman is the lead and that's certainly rare. Mbatha-Raw is certainly a good actress who deserves to be the lead here and in more big-budget films, but the material she gets in this one simply is not worthy.