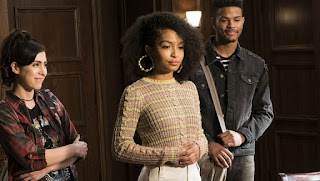 This series is a spin-off of Black-ish (2014), the African-American family sitcom on ABC. Black-ish focused on the Johnson family. It premiered 30 years after The Cosby Show (1984) nearly to the day and the comparisons between the shows were obvious. With the existence of this series, the comparisons are further cemented. Three years after The Cosby Show, which focused on the Huxtable family, it got a spin-off called A Different World where the eldest daughter of the Huxtable family went to college. Three years after Black-ish, we now see the eldest daughter of the Johnson family go to college, so in many ways, this show is this millennial generation's A Different World. Unfortunately, it's not as well-written as A Different World. It's certainly not as funny. The cast isn't as good. The kids here aren't exactly in the same league as Dawnn Lewis, Jasmine Guy, Kadeem Hardison or Sinbad. The kids here are cute, but that's about it. A better, funnier, more affecting series about a young black girl in college is Netflix's Dear White People.

Yara Shahidi stars as Zoey Johnson. She is a freshman at California University. The first episode establishes her circle of friends whom are all a very diverse group and whom all happen to be sitting together at a midnight class that changes subjects or curriculum based on the whims of its quirky professor. Zoey is an average girl trying to navigate her way through the various experiences she encounters like drugs, alcohol, sex and relationships. There is a lot of breaking of the fourth wall, talking directly to camera, in addition to the heavy amount of narration. In that regard, the show feels more like Moesha (1996) but set in a college 20 years later.

But, this show hasn't quite figured out what to do with its supporting cast, as Moesha did. They seem put there mainly to fill space than be fleshed out or uniquely engaging characters on their own. Of the seven friends, the only one who is interesting is Nomi Segal, played by Emily Arlook. Nomi is a Jewish American princess who is also bisexual but she has a problem dating bisexual men. 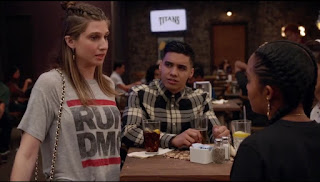 Right now though, the show seems more concerned with Zoey's love life, which is fine, but the show has already set-up what's probably going to be her end-game romance. Trevor Jackson (Burning Sands and American Crime) co-stars as Aaron Jackson, a sophomore and an activist who only protests by retweeting things on Twitter or reposting things on other social media. Zoey is infatuated with Aaron in a way that's akin to Rebecca's infatuation with Josh in Crazy Ex-Girlfriend.

The way things are going, we'll see Zoey date a slew of other people before ending up with Aaron by this show's third or fourth season, which would be its natural end point. However, the show could do what a lot of female-led shows have done and deal with that obvious romance before Zoey realizes she doesn't need him or a best friend whom she never considered is her end-game like Luca Hall, played by Luka Sabbat, the gender-fluid stoner who seems like Jaden Smith and who like Zoey is into having a fashion career or maybe being an artist. 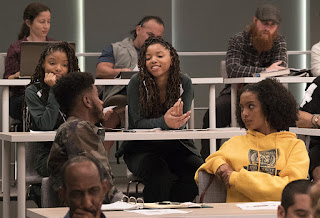