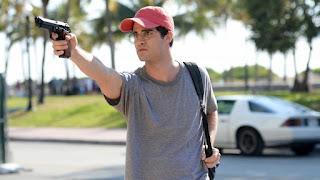 This is the second season of the FX anthology series American Crime Story. The first season was known as The People V. O. J. Simpson, which was about the murder of Nicole Simpson and Ron Goldman in 1994, as well as the infamous trial of NFL player O. J. Simpson that followed. That series featured an incredible cast giving incredible performances. It was also incredibly written to expose the issues of racism, sexism and media culture that the trial brought out. This season is attempting something similar but the way it's going about it is different and more in-line with a Hollywood trend that I don't much appreciate.

Hollywood over the past decade has output a lot of TV shows where the villain or bad guy is the protagonist. Specifically, there have been a significant number of programs where a serial killer is either the protagonist or main character who takes center stage in protagonist-like ways. Some notable examples are Dexter on Showtime, The Following on FOX, Hannibal on NBC, The Fall on Netflix, the recently cancelled Time After Time on ABC, and Bates Motel on A&E. There are other TV shows that fit into this mold like Breaking Bad on AMC or House of Cards on Netflix.

Each of those shows are exquisitely crafted, but each are problematic in their own ways. A lot of the time it depends how those shows ultimately end.  A lot of those aforementioned shows can really revel in the gore and violence like Hannibal, much as a horror film would with the goal of disturbing the audience, but the ending can shape how all that revelry should be received, or what the takeaway should be.

The ending to Dexter was atrocious, but the ending to Bates Motel was superb. Therefore, my feelings about this series might change based on how it ends. Unfortunately, this series is based on a true-crime where the outcome is known. It's not like Dexter, which is a fictional narrative. I can already guess based on how the first five of nine episodes go on how the ending will affect me.

In many of these stories about serial killers, the anchor is often the police or the detectives investigating. In The People V. O. J. Simpson, the anchors were the lawyers, specifically the prosecuting attorneys. If anything, the breakout stars of that season were Sarah Paulson who played Marcia Clark and Sterling K. Brown who played Christopher Darden. Clark and Darden were the prosecuting attorneys. Those anchors help to keep the whole thing from sinking totally into depravity. Those anchors as counterparts aren't always required, but there's got to be something to keep us from sinking into total depravity and I'm not sure this show has it, or if it does, whatever it is gets lost. 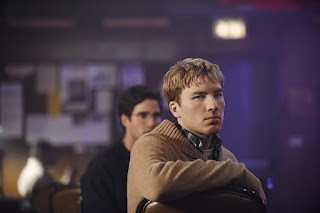 For example, The People V. O. J. Simpson never actually depicted the murders of Nicole Simpson or Ron Goldman. The series begins with them already dead and moves forward, never focusing or lingering on the corpses. There are five murders here. Three of which are particularly gruesome and this series chooses to depict all of them. It's not as if we see Nicole Simpson getting stabbed to death and nearly decapitated. Yet, we do witness the murders as they occur here. Instead of moving forward, it goes backward. This show does also linger on the corpses. There's a trade-off for that. On one hand, we get to know the victims here in ways we don't get with Nicole Simpson and Ron Goldman but at the same time, the victims don't get the fleshing out where their lives are celebrated as much as their last moments alive are stewed.

Maybe this is intentional on the part of writer Tom Rob Smith and co-executive producer Ryan Murphy who has been the leading, creative force behind both this season and last. Both Murphy and Smith are openly gay, and in this country for decades, the deaths or murders of LGBT people, especially gay men or trans-women haven't been treated with the same importance, or with the same care. Sometimes, it's something as simple and as insidious as the police not mentioning or acknowledging that the victim was gay, even when it's an element of the crime, as the third episode shows. By focusing on the corpses, lingering on them, maybe it's Murphy and Smith's way of forcing or reckoning with how gay victims have been dismissed or sometimes ignored.

That's an extrapolation that can be gained from this series, but the structure and pacing, however, negate whatever homophobia this series might want to expose. The first, two episodes are fine and everything this series wants to say is said in just those two episodes. The next three episodes change direction and attempt to deconstruct the psychopath at the center, but it doesn't. It mires him in a one-note mode of wickedness and insanity. It attempts to give voice or breath to the victims who are left in his wake, but it doesn't. They are merely victims swept up in the wave of killing. Glimpses of insight are washed over with shocking acts of violence that undermine the whole enterprise. The exception is Episode 5, possibly. 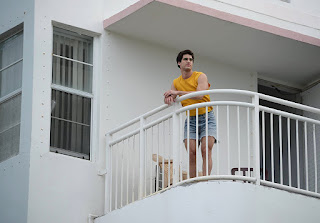 Darren Criss (Glee) stars as Andrew Phillip Cunanan, a 27-year-old murder fugitive who shot and killed Gianni Versace, the famous Italian, fashion designer on July 15, 1997. No one knows why. Reportedly, the two met once at a night club in San Francisco in October 1990. No other connection is known or believed. Andrew is gay and had a pattern of having sex with older men in order to get money or luxury items. Versace was an older gay man who Andrew might have identified as a target, an obsession that he knew he could never have, so he snapped and shot him.

Initially, Criss' performance is reminiscent of Matt Damon's in The Talented Mr. Ripley (1999) or Will Smith in Six Degrees of Separation (1993). He's a quick witted, smooth-talking, ingratiating, social climbing sycophant. He's clearly a pathological liar with a desperate desire to be connected to the wealthy without doing anything to earn it. This series invites psychoanalysis of Andrew, but only in the first episode. By the second, he's just on the run. The third and fourth episodes portray him as a sheer psychopath who's mostly vapid. Surely, that changes in episodes six to nine as the chronology moves backward and we delve into Andrew's childhood, but I already don't care, which is why the show should have reversed the order of the episodes. 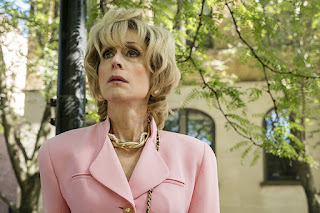 Oddly, the third episode has the least Andrew and is probably the best episode from a character standpoint. Unfortunately, the character is neither Andrew nor the victim, Lee Miglin, played by Mike Farrell (M*A*S*H and Providence). Actually, it's not unfortunately because that character is Marilyn Miglin, played by the amazing Judith Light (Transparent and Who's the Boss). She's only present in this, one episode, but her performance of this woman who's life is disillusioned after 38 years of marriage is worthy of every award you could throw at it.

Episode 4 is a prime example of sinking into depravity, following a horror scenario simply for horror's sake. One can condemn the episode for being an exercise in pure conjecture, which would be fine, if it wasn't needed. Episode 5 is better for supplying more of a platform to explore the characters who would be Andrew's first murder victims, Jeffrey Trail, played by Finn Wittrock, and David Madson, played by Cody Fern. Jeffrey is the first person killed by Andrew, and if anything, Episode 5 is in part a tribute to him, as it underlines homophobia in the military during the 90's, and it's actually the most tribute one of the victims gets other than the titular character. 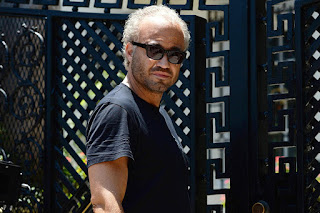 Edgar Ramírez (Joy and Hands of Stone) co-stars as Gianni Versace. Pop star Ricky Martin also co-stars as Antonio D'Amico, the partner and lover of Gianni. Unfortunately, both of them are virtually non-existent in the first, four episodes. When they appear again in Episode 5, it's a surprise. Yet, they've been absent so long one almost doesn't care to see them. The two of them aren't given the due they should have, and their story in many ways was better told in Behind the Candelabra (2013).