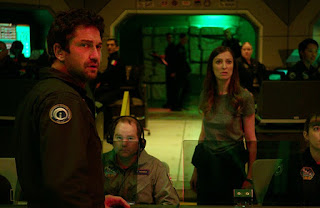 This film takes place mostly in outer space and its title starts with the letter "G," so the obvious comparison is Gravity (2013), but this movie doesn't have the kind of thrill ride momentum as that amazing Alfonso Cuarón blockbuster. This is the feature debut of Dean Devlin but Devlin is famous for being the writer of Universal Soldier (1992), Stargate (1994) and Independence Day (1996). Yet, all three of those successful, action films were directed by Roland Emmerich who is best known as the director of big-budget, disaster flicks. The apex of his work was most likely The Day After Tomorrow (2004), a series of CGI explosions that tried to be topical when it came to environmental issues. While it's honorable that these guys want to be topical or relevant, arguably it's better when they're not trying to be. They're better when doing simple, kick-ass, science-fiction films that are purely fun. For his debut, Devlin didn't learn that lesson. Devlin decides to do a series of CGI explosions that tries to be topical and it just winds up being a clunky mess.

Gerard Butler (300 and Olympus Has Fallen) stars as Jake Lawson, the lead scientist or engineer who helped design and build a space station and network of satellites that can control the weather in order to combat climate change. Of course, he's pulled from the Mark Wahlberg in Transformers: Age of Extinction school of scientists, meaning he doesn't look like a real scientist. He's clearly an action star who will have to stumble through scientific jargon. Emmerich did a disaster flick called White House Down (2013). Butler starred in that movie's clone, which came out before it, called Olympus Has Fallen. It's funny that now Butler is in this film working for Emmerich's protégé as it were.

Unfortunately, Butler doesn't get to perform as much action as in Olympus Has Fallen. That's due to the nature of this movie. He's not fighting bad guys here. His role is more akin to Sandra Bullock in Gravity, but his scenes of trying to survive in space don't have the momentum of that 2014 film. Mostly, the stuff in space amounts to a murder-mystery, but ultimately a murder-mystery that doesn't maintain the tension or thrill of that, probably because the movie is divided between what's happening on Earth and what's happening in space. The movie needs the stuff in space or else it would just be a knock-off of The Day After Tomorrow or the recent San Andreas (2015).


Jim Sturgess (21 and Cloud Atlas) co-stars as Max Lawson, an operative that either works for the White House, NASA or both. He's the younger brother to Jake, but he becomes Jake's boss or at least the intermediate between Jake and the U.S. government. There's the overly dramatic plot that involves Jake getting taken off the space station he designed called "Dutch Boy" but then Max re-hires his brother three years later after things start to go wrong on board the Dutch Boy. There's some business about Jake not taking orders from Max and there being a bit of a sibling rivalry but it's just a couple lines of dialogue than an actual thing of substance in this film.

Yet, this movie is essentially two films for the price of one. Butler is in Gravity and Sturgess is in The Day After Tomorrow. Devlin tries to balance the two and the two keep bumping into each other in ways that don't ultimately feel satisfying. While it might seem like it's saying something about climate change. I'm not sure what it is, or how comparing the Dutch Boy to the Fat Man or the nuclear bomb is the same or how other countries couldn't create Dutch Boys of their own.