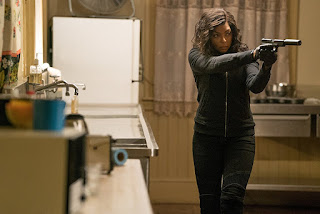 For Black History Month 2018, I wanted to spotlight films that feature African-American protagonists and hopefully predominantly black casts. This movie is particularly notable because there aren't many black, female action stars. In a recent article from Vulture magazine about the top, female, action stars, the only black woman was Pam Grier in the film Foxy Brown (1974). Grier is nearly 70 years old. The fact that a black woman 40 or younger didn't make the list is pretty indicative of what's lacking. Halle Berry, Angela Bassett and Zoe Saldana are notable exceptions, but, arguably, there are not any black, female, action stars that stand out like Charlize Theron, Scarlett Johansson, Angelina Jolie or Milla Jovavich.

Grier was able to rise because in the 1970's there was an abundance of blaxploitation films and for a couple of decades, the independent film market supported films about African-Americans in a way that isn't the case now. Films about black people can still do well, but the economics of scale have changed and the type of mid-level dramas or action films have eroded away until only action flicks involving middle-age white men like Liam Neeson or Bruce Willis were left to be made. This film harkens back to that time in the 70's when blaxploitation pictures were made. It harkens back in an attempt to reinvigorate or remind audiences of that history.

Taraji P. Henson (Hidden Figures and Think Like a Man) stars as Mary, an assassin who works for an African-American, crime family in Boston. She was a child runaway who was taken in by the crime family where she was trained to fight, shoot and kill. She's not that far off from Keanu Reeves' character in John Wick (2014), except her motivations are a bit more believable. Instead of launching a rampage over a dead dog, Mary's motivation is protecting a young boy. In that, I was able to connect and feel more for Mary than John Wick.

Written by John Stuart Newman, Christian Swegal and Steven Antin, there are script problems that bog or trip up the narrative and characterizations. The first has to do with Mary. Strangely, my issue with her is similar to my issue with the character of Juan, played by Mahershala Ali, in the Oscar-winner, Moonlight (2016). Juan, all of a sudden, decides to take in and look after a 9 or 10-year-old boy who is without parents mostly due to the illegal drug trade. Yet, it's not clear why he does this. Yes, it's an act of compassion and humanity that one would naturally expect, but it comes as if Juan has never seen a child in distress before or children who have been negatively affected by the illegal, drug trade.

The same goes for Mary. Mary essentially works for the illegal drug trade, same as Juan, but, unlike Juan, Mary is an assassin, which means she kills for a living. The opening to this film is her killing a man and then realizing he has a son who is now an orphan. She's surprised by this, which is odd because later when she has to kill someone else, she does reconnaissance and gets to know her victim's routine. Are we to believe she didn't do the same for the father in the opening scene? It couldn't have been her first kill. Or, are we to believe it's the first father she's killed? That seems unlikely. 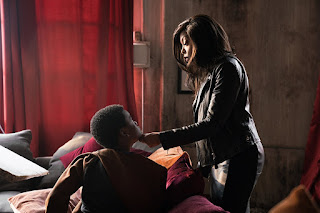 Jahi Di'Allo Winston (The New Edition Story) co-stars as Danny, the orphan boy whose father Mary killed. As a result, Danny becomes a runaway from foster care and works as a drug runner for a Russian gang. Danny isn't given much money and he's abused. He seems to be scared to walk away or go to the police. He's taken in by Mary, but it's not clear what her plan is.

Did Mary want to raise Danny? If so, it seems obvious that her lifestyle of assassinating might be a bit incompatible and would probably have to stop. Yet, she goes to the Russian gangsters to tell them to let go of Danny, as if that would work. The fact that she thinks it might work proves that maybe the screenplay doesn't provide Mary with too much wit or insight. She brings Danny to her house to stay and leaves him unattended. Yes, that's how he's lived his life for a while, but isn't she supposed to be showing him a better way, a different way? Mary seems really smart, but she couldn't have thought that keeping Danny unattended at her place where she had a closet full of unlocked guns was a good idea.

By the end of the film, Mary suggests that Danny would have to leave town, if anything happened to her, but it seemed odd that getting out of town didn't occur to her sooner. It's also doesn't seem bright of her that she thought bringing Danny into her home and into her world would be any better for him than leaving him alone or reporting him to the police.

All of those questions dampen the climatic, final action scene that's supposed to feel triumphant. It doesn't feel triumphant ultimately. The two men whom become the villains are meant to feel like the ultimate villains, but instead Danny Glover (Lethal Weapon and The Color Purple) who plays Benny, the patriarch of the crime family and Billy Brown (How to Get Away With Murder and Dexter) who plays Tom, the former love interest of Mary and Benny's son, actually feel like they're right. Benny and Tom are positioned as the antagonists, but they're more reasonable, logical and realistic about the world than Mary acts at times.

That being said, director Babak Najafi (London Has Fallen) does provide us with something we hardly ever get, that of a black woman being a bad-ass. In this case, it's a black woman being a full-throttle, action star. A few films in 2018 with bad-ass, black, female action stars include Black Panther, Annihilation and Ocean's 8. Hopefully, more will emerge, but for now, this will do.