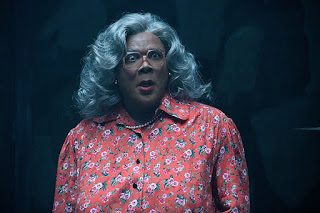 In 2017, there were three films that were #1 in the weekend box office that were directed by African-Americans. The biggest of which was The Fate of the Furious by F. Gary Gray. The other two were both horror-themed. Of those two, the first was recently nominated for several Oscars, including Best Picture. The other was recently nominated for three Razzies, including Worst Sequel. The latter even references the former, the former being Jordan Peele's Get Out and the latter being this one, the latest effort from Tyler Perry. I skipped seeing this film while it was in theaters because it was universally panned or dispraised, but Perry remains one of the few black filmmakers in this country to command a #1 spot in the box office. For that, his films are worth considering, if for nothing else than for Black History Month.

CinemaSins refers to Tyler Perry as a "discount Eddie Murphy" and that's probably more accurate when it comes to this film. If you watch Coming to America (1988) or The Nutty Professor (1996), you'll see that Murphy is a master of playing multiple roles in the same, comedic film, up there with other masters like Peter Sellers, Jerry Lewis, Mel Brooks and John Cleese. Perry is not quite on that level. Some of it has to do with his inherent skill as an actor, but, a lot of it has to do with his material. Perry can be a good writer, a very good one, but his narrative and characters here are probably even less than discount.

I'm not even sure what the moral of this story is supposed to be. A girl who has just turned 18 gets a car for her birthday and she wants to go to a college frat party in the woods. Her father on the other hand doesn't want her to grow up. He wants to treat her like a 5-year-old and keep her in the house. Her mom though wants the daughter to be free or have more freedom. By the end, Perry seems to reinforce that the daughter having a car and going to a party are two inherently bad things for which the daughter should be rebuked. These are ideas that make sense if she's underage, but her being 18 slightly defies good reason for the reinforcement of these ideas.

Perry could be trying to make the point that a person who happens to be 18 can still be immature and irresponsible. There are certainly plenty of college students in their 20's who still do immature and irresponsible things. Being an adult is only legally a number but emotionally and mentally being an adult is a whole lot more, but, besides the daughter wanting to go to a party and hook-up with a frat guy, she really doesn't do anything that warrants rebuking, and I don't think a 18-year-old girl wanting to go to a party and have sex is in itself immature or irresponsible. Her driving is a bit sloppy in one scene, but it's not played as a serious problem. 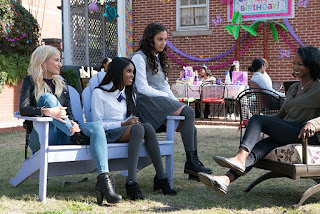 There is a line in the film about the kids having drugs, but we never see it. We don't even see the college students drinking. It's mentioned, but it's not as if we see anyone getting drunk. There is a party scene where a group of kids are dancing. We don't see any sex in which someone might have been without a condom or date-raped. Yes, some of the fraternity boys are overly horny and make stupid comments, but, for what's actually depicted, this seems like a fairly clean and nice shindig. If this movie is meant to be a cautionary tale for young girls going to frat parties, Perry certainly fails.

Unfortunately, Perry really doesn't make great use of his young cast. Over the past decade or so, there have been many films featuring Perry's character of Madea. Early in his film career, the character of Madea was never the main character or consumed as much screen-time as the character now does. Early in his career, films like Diary of a Mad Black Woman (2005), Meet the Browns (2008) and I Can Do Bad All By Myself (2009) had Madea as a side character who arguably took up less than 50-percent of the screen-time, if not smaller. Over the years, Madea has consumed more and more of Perry's films, until he has something like this where Madea and Perry as his multiple roles connected to Madea take up 70 to 80-percent of the screen-time.

This increase has hurt the films and not really aided from a narrative or character-development standpoint. So much of this film is just Madea sitting around and her brood cracking raunchy jokes but for some reason with the cursing removed. Perry as Madea and as Joe, the brother of Madea, will just sit in a scene for a long time and riff on things like bad breath, pimps and ho's, wanting to kill or beat up people and how their children or young people in general are lame.

This could be entertaining at times, but when it goes on for so long, it's done so in sacrifice to everything else in the so-called story. Interestingly, Perry has assembled a cast of social media stars, young people popular on YouTube and Instagram. This is either a ploy to reel in millennial audiences or it's a genuine appreciation of these young people. I assume Perry's motivation is mostly latter but the way the young cast is utilized or the lack thereof, one has to assume the young cast is nothing but a ploy. 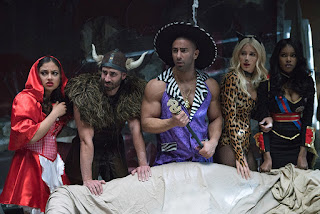 Diamond White co-stars as Tiffany Simmons, the 18-year-old in question, but her best friend is Gabriella, played by Inanna Sarkis, a YouTube star. Tiffany's love interest is the head frat boy, Jonathan, played by Yousef Erakat, another huge, YouTube star.

For Perry to have all these social media stars can't be a coincidence. Yet, we barely see them and at no point does Perry take the opportunity to comment on social media or how social media might affect horror tropes. Many of these young people are smart, sexy and funny, particularly someone like Erakat who is criminally under-used both here and in the previous film. Perry basically wastes his talents. The relationship between Tiffany and Jonathan should have been more deeply explored or more center stage. If you go to Erakat's YouTube page, his weight loss is at the top and videos about his Middle Eastern parents are prominent. It would have been interesting if Perry incorporated that into this film. Otherwise, his Madea stuff just felt repetitive.