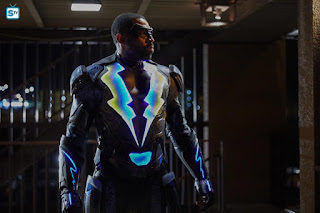 For Black History Month 2018, I wanted to spotlight films and even television shows that feature African-American protagonists and hopefully predominantly black casts. This TV show is particularly notable because there aren't many black super-heroes. This past decade, Marvel Comics and DC Comics have had numerous movies adapting their super-hero, comic-book characters. None of the titular characters in any of the movies or in their so-called cinematic universes have been black or people of color. The movies have introduced black super-heroes, but none have been the protagonist. That will of course change this year when Marvel's Black Panther is released wide. On television though, things have been a bit better.

Netflix's Luke Cage is currently the only series with a titular character whose black. There are several, black super-heroes introduced on the various CW shows. Some include Wally West, played by Keiynan Lonsdale on The Flash, Vixen or Amaya, played by Maisie Richardson-Sellers on Legends of Tomorrow, and J'onn J'onzz, played by David Harewood on Supergirl. Given this new series is on the CW and is produced by Greg Berlanti, the same producer of all the other, super-hero shows on the CW, Berlanti simply could have done a spin-off of any of those aforementioned, black characters, but none of the black characters in the previous Berlanti shows have ever really put their black identity to the forefront. Legends of Tomorrow occasionally commented on Vixen's African heritage or the blackness of Firestorm aka Jefferson, played by Franz Drameh. However, with this series, creators Salim Akil (Soul Food) and Mara Brock Akil (Being Mary Jane) can put that black identity front and center, addressing very topical subjects like Black Lives Matter.

Cress Williams (Hart of Dixie and ER) stars as Jefferson Pierce, an Olympian who won gold as a decathlete. It's not explained how, but he gained the super-power of being able to wield lightning. He has a suit that protects him from certain attacks. He's good at fighting with significant strength and agility. He got married though and had two daughters, and eventually the toll of crime-fighting was getting to be such that his wife made him retire his alter ego called Black Lightning. Jefferson then became the principal of Garfield High School in the city of Freeland. Nine years later, a drug gang called the 100 Gang has gained power. They're not just trafficking drugs but also people in the form of prostitution. When Jefferson's daughters become targets of the gang, Jefferson feels the need to put the suit back on. 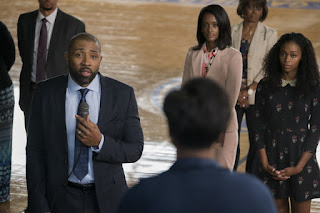 Except, the first three episodes are Jefferson having a rather ridiculous internal and sometimes external battle about whether or not he actually will put the suit back on. Jefferson questions if he should come out of super-hero retirement and be Black Lightning again, which is a stupid question because if he didn't become Black Lightning again, there wouldn't be a TV show. It's a trope in super-hero stories where the super-hero has to decide against living a double life and abandoning his or her super powers and crime-fighting ways. I liked it in Superman II (1980). It's been done so often that if it's going to be done again, the writers have to come up with really compelling reasons and this show doesn't.

There is no credible reason here why Jefferson shouldn't be Black Lightning in full force and fighting the 100 Gang, but by Episode 4 that retirement issue is over. The show wastes time with that indecision, but by Episode 4 it's over. It's not that dissimilar from Luke Cage, except Luke Cage obviously doesn't have the history and family, so Luke Cage's indecision isn't as long or as weighted or as overly dramatic as it is here. But, at least, in the first episode, we learn that Black Lightning is taser-proof just as Luke Cage is bullet-proof. While I wish that the comparisons with Luke Cage would have stopped there, they don't.

As mentioned, the main villain so far is the 100 Gang. African-American gangsters like drug dealers and drug traffickers are not new in the TV shows with predominant black casts. There have been quite a few lately from The Wire on HBO, Power on Starz, Empire on FOX and Luke Cage on Netflix. There was even an Oscar-nominated film called American Gangster (2007) starring Denzel Washington, which was this same thing. None of them are doing anything more extraordinary than New Jack City (1991) starring Wesley Snipes. Snipes as Nino Brown in that 1991 film is probably the best black gangster ever put on screen. Mahershala Ali as Cottonmouth in Luke Cage was probably a close second, but the writers of Luke Cage decided to get rid of him and make the villain a powerful woman, played by Alfre Woodard. 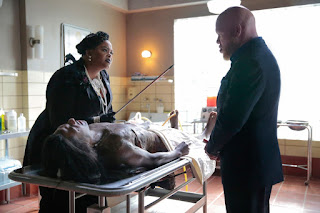 Guess what! The same thing happens here. Lala, played by William Catlett, is set up to possibly be this show's Nino Brown, but not as suave and sophisticated. He's more or less a thug. Then, another Nino Brown-wannabe by the name of Tobias Whale, played by rapper Krondon, slithers in the background, just as Theo Rossi's character did in Luke Cage. Tobias though does come off as more like the Cottonmouth of this world, but, again, this show pivots to reveal that Tobias isn't the real boss. The actual villain is a powerful woman named Lady Eve, played by Jill Scott (Why Did I Get Married and Get On Up). Unfortunately, right now, Scott's character is more cartoonish and not as complicated or nuanced as Woodard's character was.

The reason Woodard's character was better was because she wasn't just out for power and control in the beginning. In her mind, she was trying to improve Harlem and make things better for black people overall. Becoming a gangster was not her goal or desire, but that doesn't seem to be the case with Lady Eve who's also a mortician. Lady Eve comes off as one dimensional so far, just the run-of-the-mill villain who wants power and control, not interesting or different.

Yet, making her character more nuanced is the least of this show's issues. The fact that the villains are gangsters at all is not interesting. Again, from The Wire, Power, Empire and Luke Cage, we've seen this with regard to African-American stories. If we're going to have a black super-hero, we should have black super-villains. Why do black TV shows have to constantly be about the drug game? This was a complaint I had with Luke Cage, and it's quite frankly boring to pit a super-powered guy against regular thugs with no powers. There's no competition there.

Black Lightning can easily beat up or electrocute these thugs and drug dealers, even with their guns. If you have a super-hero, his adversaries should pose more of a threat. Preferably, the adversary should have some super power too or some super weapon. In The Flash, Legends of Tomorrow and Supergirl, the adversaries or villains have super-powers because the titular characters have super-powers. Otherwise, what's the point?

Vigilantes almost don't make sense in the modern era. The reason is because police departments and police forces have gotten better or more powerful, more technologically advanced. If anything, police are almost too powerful, which is part of Black Lives Matter's argument against them, the militarization of police. During President Trump's State of the Union address, Trump mentioned Homeland Security Investigations Special Agent Celestino Martinez. Martinez served 15 years in the U.S. Air Force before becoming an ICE agent where he spent another 15 years fighting gang violence. Specifically, ICE fought the MS-13 gang. According to Trump, last year Martinez commanded an operation that arrested 400 gang members. Who knows if the 100 Gang in this show is like MS-13, but if the police can arrest 400 gang members in real-life, the police in this show should be able to handle the 100 Gang. Meanwhile, Black Lightning should be fighting tougher villains, villains with super powers.

A lot of people were talking about a moment in Episode 3 that a few didn't like. Jefferson confronts his youngest daughter's boyfriend, a jock named Khalil, played by Jordan Calloway (Riverdale and ER). It was an awkward moment where Jefferson acts like a stereotypical father, trying to intimidate Khalil without getting to know him. It's annoying because the series establishes Khalil as a good and moral character. It's supposed to be a moment of comedy, but it plays very awkwardly. Jefferson is a principal and Khalil is a student and Jefferson asks Khalil about what he does in the shower. It's awkward in a Jerry Sandusky way. Yet, none of that matters because the show basically turns Khalil into Jason Street from Friday Night Lights (2006). 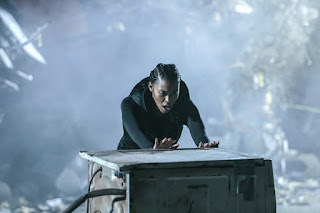 The only real positive is that Jefferson's eldest daughter is Anissa, played by Nafessa Williams (Code Black and Twin Peaks). She's a woke, beautiful lesbian or possibly bisexual, black woman who is revealed to have super powers too. It's more interesting watching her discover her powers and reckon with how to use them or if she should. I'm curious to see what the series does with her character, but that's about it.