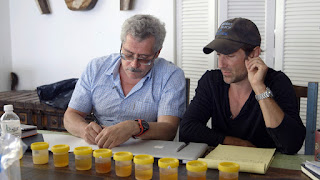 The nominations for the 90th Academy Awards were announced last month. I've seen most of the recognized films. I've written reviews for many of them, which can be found here. For the films that I haven't seen, I've been playing catch up. This film is one such I missed when it was released year. It's nominated for Best Documentary Feature. It won a Special Jury Prize at the 2017 Sundance Film Festival where it premiered. It also won a Cinema Eye Honors Award and a Critics Choice Award. It's up for a BAFTA and a DGA Award. All of which are good indicators, but, based on the buzz and other awards, it's still probably only in third position to win the Oscar. Agnès Varda's Faces Places is most likely the front-runner with Last Men in Aleppo probably in the second slot.

However, when it comes to films that are most topical and relevant to not only Americans but also to the whole world, this one easily wins gold. This film was nominated for the Oscar just a couple of weeks before the 2018 Winter Olympics in Pyeongchang, South Korea. It's actually the third feature in terms of profile that was Oscar-nominated this year that is connected to the Winter Olympics. The other two were I, Tonya and Molly's Game. Those movies spotlight specific and infamous athletes. This movie is more about the institution as a whole and a monumental conspiracy and controversy that rocked the Olympics to its core.

When the movie begins, I definitely got vibes of Morgan Spurlock's Super Size Me (2004) in which the filmmaker here, Bryan Fogel, was going to subject himself and his own physical body to an experiment  that he would document on camera over a period of time. However, as the movie goes along, there comes a point where the movie pivots or turns a corner and feels more like Laura Poitras' Citizenfour (2014). Fogel becomes involved with a whistle-blower whose freedom and very life might be in danger. In Poitras' film, her whistle-blower was Edward Snowden who went from the U.S. to now living in Russia. Fogel's whistle-blower is Grigory Rodchenkov who went instead from Russia to the U.S. It's funny because at one point Rodchenkov references Snowden and because Snowden's actual attorney is a contact here, this film could be considered a spiritual sequel to Citizenfour.

This movie also feels like Catfish (2010), Weiner (2016) or similar documentaries where the filmmaker starts out thinking their movie is going in one direction and then all of a sudden things change leading the movie down a totally new path. Often times, this requires patience on the part of the filmmaker and following a person or a story for years. In Fogel's case, he was filming sporadically over the course of two years. He starts a little after the Sochi Olympics in Russia and finishes after the Rio Olympics in Brazil, and though it was seemingly not his intention, his doing so reveals probably the greatest indictment and deconstruction of the Olympic games that has ever been put to screen, if you discount the ARD Germany documentary on the same subject. 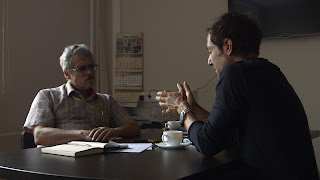 With Grigory Rodchenkov, Fogel really lucks onto a great subject to follow for years. As any documentary filmmaker will probably attest, having an engaging subject to follow or to interview is probably more than half the battle in making a great documentary. Rodchenkov is certainly that. Snowden had a powerful story, but unfortunately he's not the greatest screen presence. Rodchenkov, however, is charming, smart, funny and passionate with every moment of him in frame being a delight, even as he describes the illegal things he did.

If you haven't heard of Rodchenkov, he's basically the man who provided proof that Russian officials, up to including President Vladmir Putin, cheated at the Olympic gams, not only at Sochi 2014 but going back decades with a plan that allowed Russian athletes to take performance-enhancing drugs. Rodchenkov calls Russia "top-level cheaters." It is the biggest sports doping scandal that has ever been. With Fogel's great cinematography in certain sequences, editing or use of animation, he makes it all exciting to watch.

If there's one criticism that I found, it's in the pivot or left turn that is made in the film. Where Fogel takes us here is incredible, but his original premise is ultimately abandoned. His journey begins with Lance Armstrong who is probably the most famous American who admitted or who was caught up in a doping scandal. Fogel's original premise was to show how Armstrong got away with passing his drug tests. Fogel shows how hundreds, if not a thousand Russians got away with it, but it's not clear if what happened in Russia can be applied to the U.S. 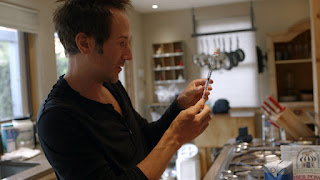