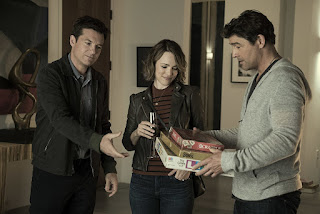 This movie answers the question of what if you took David Fincher's The Game (1997) and turned it into a comedy, a comedy in the vein of Horrible Bosses (2011), which is made by the same people, including actor Jason Bateman who isn't really acting. He's doing his usual, Jason Bateman shtick, but it works here. If one knows that Fincher film, then one knows what to expect, but this film, written by Mark Perez, plays on that expectation, and instead makes the movie more about having fun and funny set-pieces with pretty hilarious or affecting character moments that keeps us in the present and focused on what's happening rather than thinking about the ridiculous plot or what twists it might take. As such, the movie succeeds.

Jason Bateman (Juno and Hancock) stars as Max, a married man who lives with his wife Annie in a nice, suburban cul-de-sac. He meets and falls in love with Annie, played by Rachel McAdams (Wedding Crashers and Doctor Strange) at a trivia game. They continued bonding over weekly game nights with friends until they eventually got hitched. They continued having game nights at their house. However, the two have had trouble getting pregnant. Their doctor suggests Max's infertility is psychosomatic, stemming from issues with his brother.

Kyle Chandler (Friday Night Lights and Bloodline) co-stars as Brooks Davis, the older brother of whom Max is jealous. Brooks is more handsome, more charming and more successful. When Brooks arrives in town, he has the fancy sports car, the Corvette Stingray, which Max always wanted, and he has the huge house, which Max also always wanted. Brooks is even better at trivia, or Brooks enjoys undermining and embarrassing Max to throw Max off his game, so that Brooks can appear to be better at trivia. Brooks sets up a game night at his house that involves role-playing and actors engaging in an interactive, puzzle-solving, scavenger hunt.

The fun of this movie isn't solving the puzzles or the scavenger hunting. All that is just an excuse, a weak one for jokes and crazy action bits. Other than Max and Annie, we follow two other couples, pulled along in this interactive, scavenger hunt. Lamorne Morris (New Girl) who plays Kevin and Kylie Bunbury (Under the Dome) who plays Michelle are the married couple that's been together the longest. Billy Magnussen (As the World Turns) who plays Ryan and Sharon Horgan (Catastrophe) is the unmarried couple. They don't get involved with a lot of the action sequences, but we do get comedic scenes with them that bring out their various flaws or eccentricities like Kevin's jealousy or insecurity, as well as Ryan's just sheer idiocy. Magnussen playing a sexy simpleton isn't new. It's kind of his shtick. Check American Crime Story, Unbreakable Kimmy Schmidt and Friends From College.

Jesse Plemons (Friday Night Lights and Breaking Bad) is the scene stealer and quite honestly the movie stealer. He plays Gary, the creepy cop who lives next door to Max and Annie. Gary wants to be invited to Max and Annie's house to participate in the games, but they keep not inviting him, given he's the ex-husband of their friend. He's just weird, as he constantly wears his police uniform, even off-duty, all while carrying his toy poodle everywhere. It's made even weirder by the fact that every line delivered from Gary is done in the most deadpan way possible.

Yes, there are the hilarious, over-the-top, action scenes like a kitchen fight that's like something out of a Jackie Chan film, a keep-away scene involving a Fabergé egg that feels ripped out of a Scooby-Doo or a Looney Tunes cartoon, and a car chase that's mocked as being a mocking of a Liam Neeson flick, but there are also all of the great smaller bits or jokes that work extremely well. I really enjoyed the bit about Denzel Washington, a running gag about pretzel boy, and a convoluted Pac-Man metaphor. It all had me smiling or laughing consistently. It's the first great comedy of 2018.