Max Emerson's feature debut as writer-director references the romantic comedy Pretty Woman (1990), a veritable fairy tale about a prostitute who is swept off her feet by a wealthy man who drops her in the lap of luxury and they end up falling in love and rescuing each other. Emerson references the 1990 hit because the second act of his film emulates it in many ways and in this era of Deadpool an easy tactic is to have some kind of metacommentary rather than come off as possibly disingenuous. This film isn't ripping off that Garry Marshall-directed rom-com. For starters, the context here is different because here it's a same-sex relationship, and even though it's not exactly what we get, it would be interesting to see a gay male version of Pretty Woman.

Most films about prostitution, particularly male prostitution, don't glorify it or make it as much of a fairy tale as Pretty Woman did. A lot of films about male prostitutes or male sex-workers, for example, don't end happily. Even the highly seminal, My Own Private Idaho (1991) had a bit of a twisted fairy-tale aspect to it, as much as it had Shakespearean aspects to it, but even that film didn't end happily or even that much bittersweetly. However, Pretty Woman is the most successful film about prostitution, so if Emerson's movie were going to take a swipe at any film on the subject, it would be that one.

And yes, he is taking a swipe. His film here doesn't treat it with much reverence, even though his second act here would seem to suggest otherwise. It's also not to suggest that one can't enjoy that 1990 blockbuster comedy. It's simply that the real reality of prostitutes isn't Pretty Woman, especially if those prostitutes are homeless youth in the LGBT community. Fueled by real-life statistics, Emerson crafts what could be considered a subversion of that Pretty Woman fantasy by showing what actually happens to LGBT youth who get caught up or succumb to this world. Emerson also throws in a slight detour into Boogie Nights (1997) just for good measure.

Conor Donnally stars as Jack, the Julia Roberts of this story, although Donnally bears more a resemblance to Jonathan Groff but with longer hair. As much as Roberts' character had a bit of a persona, a blonde wig and high, leather boots, so does Jack. Jack's persona though includes a red hoodie with devil ears and a bandana over his face where he pretends to be a domestic terrorist or freedom fighter who eschews or rebukes modern, traditional life. Instead of bullets and bombs, he squirts people with condiments like ketchup and mustard. Roberts' character was single, whereas Jack is in a relationship. His love and playfulness and dedication to his boyfriend are all very charming, but it sets up and reinforces the fact that this movie is not going the way of Pretty Woman. Jack isn't going to fall in love. He already is in love. 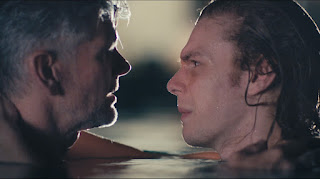 Terrance Murphy co-stars as Ken Price, the Richard Gere of this story who perhaps bears a passing resemblance to the actual Richard Gere with a little Campbell Scott mixed in. If this were emulating Pretty Woman, Jack would fall in love with Ken, but that's not the case here. As much as Gere's character was a lovelorn businessman, Ken exists in a similar space. Except, Ken isn't single as Gere's character was. Ken pretends to be divorced when he's actually married with a young child. He sees his local priest about fighting his same-sex attractions. His wife is aware of it, but she thinks he's stopped acting on it, which clearly isn't the case.

Ken can't resist his urges, so he whisks Jack to South Beach in Miami, Florida. They fly down for the weekend and stay at Ken's condo high above the ocean's edge. It's all fun in the sun, wealth and opulence, extravagance and indulgence, until things take a turn. One day, Jack is on top of the world and the next he's back on the streets having to sell his body to survive, as well as take drugs to cope.

Jack is exposed to the kind of lifestyle he wants. Yet, quickly it's taken away or he has to walk away not because of abuse or bigotry. Given that he's called a hustler, he's not all about money. He does have tendencies that would hint that he can be a petty criminal, but he is that cliché of a hooker with a heart of gold. Yet, Donnally's performance is sincere enough to overcome that cliché.

The spiral downward is perhaps a bit too fast. The pacing in the third act can feel a tad rushed. Emerson perhaps spends more time on the dissolution of Ken's marriage than was needed or that resulted in anything more insightful. Murphy's performance is effective enough to carry us through. He's aided by the supporting performance of Katie McClellan who plays Ken's wife, Jess. However, I will admit I would have preferred less of her and more of Jack on the decline. It might have been too fast, but Emerson gives him a monologue over the phone, which lasts about three minutes that conveys Jack's spiral pretty well. 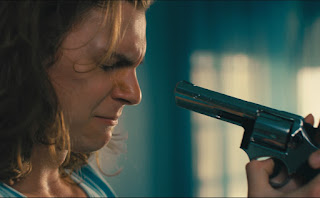 It's not all depressing or this deconstruction of Pretty Woman. There is some levity here. Again, I give it to Donnally. Aside from having to be tough and vulnerable, he also has to be and in fact is an amiable and buoyant presence throughout the movie, but Emerson tosses in some comical characters to alleviate that burden. If you've seen other queer films about male prostitutes from Midnight Cowboy (1969), Johns (1996) to Sugar (2004), then some of the levity and comedy in Emerson's movie won't be too surprising, as some of the encounters are a string of quirky or just straight weird people in need of at times fetishistic things.

When it comes to movies about male prostitutes, Boy Culture (2007) and Strapped (2010) still remain my personal favorites, but Emerson's entry here is solid as an attempt to put aside the fantasy and move toward the reality of life for young gay men on the streets.

Not Rated but contains sexual situations, nudity, language and some violence.
Running Time: 1 hr. and 30 mins.

In theaters in Los Angeles on June 1.
Available on DVD and VOD on June 5.