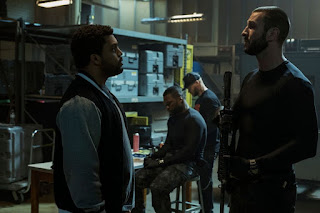 The rest of the movie proceeds in a typical manner of criminals planning a crime, a high-stakes robbery, as it also follows the cops trying to catch them. The weird thing is that the cops do catch them, so I'm not sure what the dilemma is or what is keeping the cops from arresting the criminals.

Gerard Butler (Olympus Has Fallen and 300) stars as Nick O'Brien, the head of a unit in the Los Angeles County Sheriff's Department who responds after the opening scene, which results in an armored truck being hijacked and stolen, as well as the driver shot and killed. Nick is able to figure out who the culprits are right away. He even learns where they are. He even gets one of the criminals to flip on the others, which happens in the first half-hour of this movie, but the movie goes on for another two hours and I'm not sure why. Nick has enough to arrest them in the first half-hour. Yet, he doesn't.

O'Shea Jackson, Jr. (Straight Outta Compton and Ingrid Goes West) co-stars as Donnie Wilson, an ex-convict who's known for speed driving but who now works as a bartender. He's the crew member who is flipped by Nick. He's coerced into a confession, but I'm not sure why Nick doesn't get Donnie to testify against the others and arrest the whole crew. The movie proceeds as if Donnie is an informant, helping the police on the next criminal act, instead of dealing with the first. The movie also doesn't do much to portray Donnie as other than a hired thug and not an integral part of the team as the characters in Ocean's Eleven (2001). He's meant to be a great driver, but he's not really utilized that way.

Pablo Schreiber (Orange is the New Black and The Wire) also co-stars as Ray Merrimen, the head criminal who organizes the bank robbery that becomes the centerpiece of this film. He plans the robbery of the Los Angeles Federal Reserve. He's the definite Danny Ocean who comes up with a detailed and intricate scheme to penetrate what is seemingly an impenetrable place. The security and protocols at the reserve would make any robbery impossible, but Ray finds a way. 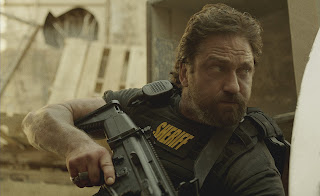 Of course, the cleverness of watching Ray pull off this heist is a compelling one. It's only clever though if you haven't seen Inside Man (2006). It then leads to an over-the-top shootout. It's preceded by a long sequence of men on both sides gearing up their weapons. It comes across as machine gun porn, just a fetish of deadly arsenal. The shootout when it arrives isn't that incredible, not any more so than a Michael Mann shootout. The movie's length helps to endear us to the men involved on both sides, but writer-director Christian Gudegast doesn't give us enough quality time with the various guys. Other than the three aforementioned men, we don't get enough quality time with the rest.

Curtis Jackson aka 50 Cent (Southpaw and Get Rich or Die Tryin') plays Enson Levoux, one of the criminals and the right-hand man to Ray. The movie attempts to give us some quality time with him, but it's not enough with what made it in the theatrical version. When we see the fate of his character, Gudegast wants it to be an emotional impact, probably a strong one, but when we see the fate, I only shrugged it off.