Movie Review - 7 Guardians of the Tomb 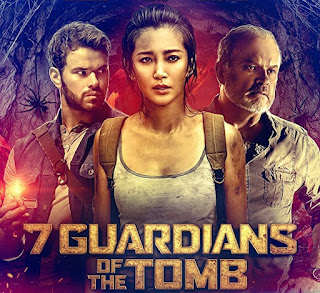 Last year, Tom Cruise starred in The Mummy (2017), which was a reboot of The Mummy (1999) starring Brendan Fraser. The Cruise film wasn't as fun as the Fraser film, but the tone of the 2017 flick wasn't meant to be the colorful romp that aped Raiders of the Lost Ark (1981) or similar adventure films. The 2017 movie was darker and grittier and was designed to be a juxtaposition to the 1999 movie. However, Australian filmmaker Kimble Rendall doesn't want to contrast that 1999 blockbuster. Rendall wants to emulate it.

Instead of diving into Egyptian history, here Rendall whose also a co-writer dives into Chinese history. Unfortunately, that history isn't as exciting or as sexy as the Egyptian history, which is really all about magic and mysticism. Conversely, the Chinese history is all about science and bio-engineering. It suggests that the ancient Chinese were perhaps better at science than even we are today.

Bingbing Li (Transformers: Age of Extinction and Resident Evil: Retribution) stars as Jia, a scientist who seems to be a toxicologist and maybe a herpetologist, as well as an arthropodologist. She's described as an expert in venomous creatures like snakes. If anyone remembers, snakes are the bane of Indiana Jones, the main character in Raiders of the Lost Ark. The opening of this film includes Jia demonstrating envenomation, but after that, the rest of the movie has nothing to do with snakes. The animals in question for the rest of the film are in fact spiders. 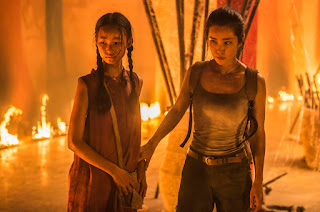 Jia is the daughter of a man who owned China Pacific Biotech, a company that worked in medicine and pharmaceuticals. Unfortunately, her parents disappeared and were presumed dead. Her brother is also a scientist who is employed at their father's company. He also disappears in western China on a exploratory mission, but Jia is determined to find her brother. This movie is about her journey to see what happened to him. Along the way, we see her express her sibling bond with another person.

Like The Mummy (1999) or The Mummy Returns (2001), which also this movie shares similarities, the majority of the action takes place in underground, stone or rock passages and rooms. In The Mummy, that place was a pyramid or what the Egyptian pharaohs built as their burial chambers. Here, the Chinese emperors simply had mausoleums built into a soft mountain or a really large hill, but in this case, it's out in the desert further equating it to the look and feel of The Mummy movies.

Here, the burial chamber is an entire necropolis that's wide and vast, featuring many rooms to explore. Rendall makes his film a kind of puzzle box or a series of puzzle boxes from which Jia and the other characters have to escape. It's reminiscent of the SyFy game show Exit (2013), or it's like Indiana Jones and the Temple of Doom (1984) or Indiana Jones and the Last Crusade (1989) where the protagonist has to go into some ancient structure and overcome booby traps. Unfortunately, Rendall's script is not as clever with its booby traps or its puzzle boxes as those Steven Spielberg-directed films.

The booby traps or puzzle boxes aren't all that intellectually challenging or all that death defying. What's supposed to up the ante are the presence of the aforementioned spiders or what's learned are mutant spiders. If one thought the scarab beetles in The Mummy movies were creepy, then the spiders in this movie will totally creep you out. They're just the height of gross and there are millions if not more of them. After a while though, they become less of a threat than a nuisance, as most of the characters continue to survive. This movie has surprisingly few casualties for the majority of the run-time. 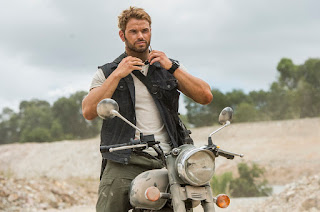 Kellan Lutz (The Legend of Hercules and Twilight) co-stars as Jack Ridley, the young, buff, handsome, roguish but highly-trained, military soldier. Jack is somewhere in between Fraser's character in The Mummy and Harrison Ford's Indiana Jones. Jack isn't the swashbuckling type. He's more the no-nonsense, regimented, action hero. Given Lutz's role in The Expendables 3 (2014), he fits into this role extremely well. He gets to do some flirtation with Li's character, but he's pretty much just straightforward.

Shane Jacobson (Jack Irish and Newcastle) who plays Gary is the comic relief, the funny fat guy as it were. Jason Chong (Wolf Creek and Marco Polo) who plays Chen Xu is the exposition machine. Stef Dawson (Cleverman and The Hunger Games: Catching Fire) who plays Milly Piper is the sassy redhead who is in charge of logistics. Chun Wu who plays Luke is the gender-swapped damsel in distress aka Jia's brother, and Kelsey Grammer (The Expendables 3 and Transformers: Age of Extinction) plays Mason Kittredge, the man searching for the so-called fountain of youth. He's the more evil Ponce de León, or if this were Indiana Jones and the Last Crusade, he would be the Elsa equivalent. 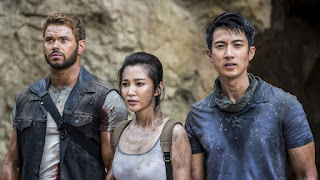 The writing for the cast isn't that great. More to flesh out their characters would have been appreciated or like a horror film, clever or gruesome ways to dispatch them would have been interesting, but this movie trots along rather clunkily until the end, which feels very rushed and anti-climatic. Lutz, however, is a pretty and hunky lead to look at and to follow here.

Not Rated but contains disturbing or scary images and language.
Running Time: 1 hr. and 30 mins.