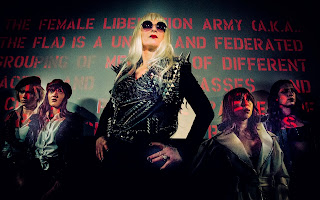 There are a couple of ways to enter into this movie. For starters, this film premiered at the 67th Berlin International Film Festival or the 67th Berlinale in 2017. It's about a group of radical, lesbian women who commit revolutionary acts. The movie was made by a radical, queer filmmaker named Bruce LaBruce. It arrived ten years after another film about a group of radical, lesbian women also premiered at that same place and also made by a radical, queer filmmaker. Itty Bitty Titty Committee first appeared at the 57th Berlinale in 2007. Jamie Babbit who made it was up for the Teddy Award for that comedy, which wasn't as arch as Babbit's previous and debut work, But I'm a Cheerleader (1999), which was a film more out of the John Waters' school of filmmaking with intentional campiness.

Writer-director Bruce LaBruce (Gerontophilia and Otto; or, Up with Dead People) has seemingly taken the subject matter of Babbit's 2007 Berlinale flick, as well as the tone of her 1999 feature debut and combined them together to concoct this provocative satire of sorts. Yet, there is another way to look at this LaBruce film. LaBruce's feature hits theaters this week. This same week last year saw the premiere of Sofia Coppola's The Beguiled (2017) at the 70th Cannes Film Festival and in many ways, LaBruce's film is an ultra-extreme, queer remake of The Beguiled, except LaBruce doesn't have the same problem as Coppola of excluding black representation. 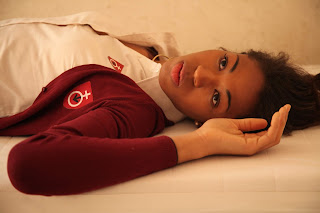 Kita Updike stars as Isolde, a young black girl living in the countryside of Germany in the late 90's. She lives with about a dozen women and girls in a huge home tucked away on a private estate. The estate is very reminiscent of the Virginia property in Coppola's film, not totally in architecture but in atmosphere. The veneer to any passers by, particularly to any male passers by, is that the estate is home to a convent or seminary, an all-girls school run by Catholic nuns, but like Whoopi Goldberg in Sister Act (1992), the nun's habit is only a cover to hide what's really underneath, which is an anti-capitalist and anti-male, revolutionary party that doesn't want gender equality but instead feminine singularity. The party is called the Female Liberation Army or FLA.

Susanne Sachße also stars as Gertrude aka Big Mother. Gertrude is the leader of the FLA. She's also headmistress of her so-called school, a school that doesn't necessarily advocate violence or even genocide, but does see all men as something to be eliminated. The school even goes as far as teaching and aspiring for a way to eliminate men from the reproduction process. If this was Coppola's film, Gertrude would be the Martha Farnsworth equivalent. Martha was the headmistress in The Beguiled. She ran the school, but when Gertrude first appears, she comes across as a more militant Lady Gaga. Her demeanor swings from Farnsworth to Mother Superior from Sister Act. Yet, she's a strident and unwavering ideologue whose misandry never thaws. 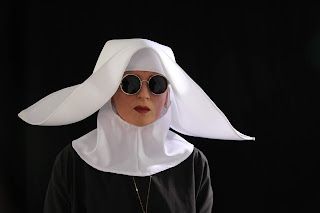 However, any illusion of Gertrude being anything like a stern taskmaster of a nun or stuck-up, school marm is immediately dashed when she lays out her ultimate plan. It's then that this film devolves into John Waters territory. Fans of LaBruce and his pornography background won't be surprised by the path this movie takes to what Gertrude says is her ultimate, utopian world.

There's only a few stumbling blocks to Gertrude's vision of the future. The first is the one similar to the initial and main stumbling block in The Beguiled. Isolde who would be the Amy equivalent discovers that stumbling block, as she might end up being a stumbling block herself. For those who don't know or remember, in The Beguiled, Amy is the teenage girl who finds John McBurney, alone and injured in the woods and brings him back to the all-girls school, which is forbidden. Isolde does the same thing.

Til Schindler co-stars as Volker, the John McBurney equivalent. Yet, he's perhaps not as masculine or rugged as Colin Farrell was in Coppola's film or even Clint Eastwood who played John McBurney in the original 1971 version of The Beguiled. John McBurney was a Union soldier in a Confederate state running from Confederate troops in 1864. Volker is similarly on the run but not from Confederates but simple German police in 1999. It's not clear what Volker's crime was, but it required the police to pursue Volker with drug-sniffing or maybe bomb-sniffing dogs. Like John McBurney, Volker hides at the school until the coast is clear and it's safe for him to leave without getting caught. In a way, the premise is also similar to Wonder Woman (2017) with Volker also being the Steve Trevor equivalent. Yet, the Themyscira here actually is the obvious, lesbian paradise mocked on Saturday Night Live. 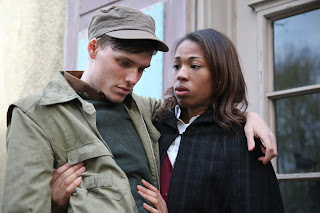 In The Beguiled, all the girls in the school know about John immediately and all of them become fascinated with John. Some even fall in love with him. LaBruce doesn't go down that path. The film stays strong to the central idea that boys are not welcome or desired in the FLA. There is a bit of needle-threading that has to be accomplished first. The question becomes what will happen when Volker is discovered and what will happen to Isolde too when the FLA find out she's been hiding and protecting him.

At the same time, Isolde has another secret that also threatens the so-called feminine sanctity of the FLA. It might be a spoiler, but Isolde's secret is one that could have been pulled from The Crying Game (1992). Isolde brings Volker into that sanctity and challenges keeping him there, suggesting that he can be converted to their way of thinking and feeling, a gentler version of Pedro Almodóvar's The Skin I Live In (2011). In that, LaBruce's film explores and represents a full range of womanhood and what it means to be a woman, even if perhaps you're not born one.

Yet, this movie isn't passive about it. It instead is aggressive. It barrels toward an ending that could have been directed by Quentin Tarantino, minus all the incredible violence. LaBruce substitutes the blood and gore from trying to kill and take life with the blood and gore of a different kind. LaBruce splices in actual video footage of a medical, surgical procedure in a scene that's more graphic and stomach-churning than anything Tarantino has ever put on screen. Forget Inglourious Basterds (2009). LaBruce's ending is placed in a similar venue as that Tarantino flick, but, as such this movie could be called "Inglourious Bitches." 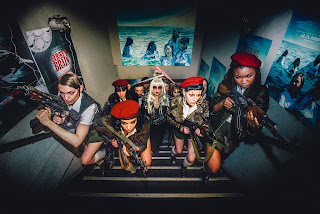 LaBruce's dialogue isn't as good as Tarantino's, but LaBruce does come up with some clever puns. Starting with the funny locator title, LaBruce announces we're not in Germany but instead Ger(wo)many. In fact, any word with the word "man" in it, he adds (wo) to it. It's indicative of the theme of this movie, which is women inserting themselves, if not asserting themselves.

In select theaters starting May 25.
In Washington, DC on June 15.
In Baltimore and Philadelphia on June 22.
For more theaters and show-dates, go to http://www.cartilagefilms.com/films/the-misandrists