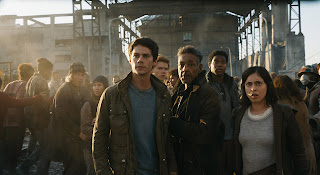 This is the third and final installment in this trilogy that has adapted the YA novels by James Dashner. All three films have been written by T.S. Nowlin and all three have been directed by Wes Ball. The films haven't been great but they've gotten progressively better. This one is by far the best. It feels overly long and is in fact the longest of the three. Some bits could have been trimmed here and there, but, the four major action scenes were well done and exciting enough. This movie also accomplished what the others didn't. It made me care about its characters and this film actually moved me. Anything that can evoke an emotional reaction from me about its characters in an empathetic way is admirable and kept me on the ride.

Dylan O'Brien (American Assassin and Teen Wolf) stars as Thomas, a character who has never really had any character or personality other than being a brave, stalwart, standard, military-style leader, mostly stoic and moving from one mission to another just for survival's sake. It didn't really work in the first, two films, which had him as just a runner whose only motive is escape. It wasn't enough to generate an emotional core that could be effective in any way. In the first, two films, he was basically just a cog in a wheel. Now, this movie changes that somewhat. Thomas and a couple of the other characters have been through so much as to bond them. Thomas' goal to save one of them becomes enough of an emotional hook to carry this movie. It's not well-developed but it's enough to make this adventure compelling.

The previous film had an ending akin to The Empire Strikes Back (1980) with the character of Minho, played Ki Hong Lee (Wish Upon and The Stanford Prison Experiment), being in the Han Solo position at the end. Minho wasn't frozen in stone like Han Solo, but he did suffer a similar fate of being captured by the bad guys. Therefore, the opening to this film is similar to the opening of Return of the Jedi (1983) with the whole goal is for Thomas to rescue Minho just as Luke rescued Han, except that isn't what happens and Minho's rescue is actually dragged out a little longer in this movie.

The problem is that Minho as a character in no way compares to Han Solo in terms of being a standout that will be remembered generations from now. This isn't because this franchise isn't as big a blockbuster as Star Wars. It's because the movie doesn't develop Minho all that much. He's basically a tag-along. He gets to kill a guy at the end of the first movie but this movie eliminated that, so he would almost be a forgettable character if it weren't for this movie deciding to make Minho the MacGuffin. It still doesn't make Minho interesting by himself, but it gives Thomas more emotional stakes.

Thomas Brodie-Sangster (Game of Thrones and Phineas and Ferb) also co-stars as Newt. He's a tag-along too, but the movie makes him such a loyal companion to Thomas. He's not a MacGuffin but in most thrillers he becomes what's equivalent to a ticking time-bomb. He's a human time-bomb. Explaining the details of that isn't necessary. Just know, it's a zombie apocalypse type of scenario. There's a walled off city akin to George Romero's Land of the Dead (2005) and Newt has become infected. Thomas hopes to save Newt too, which becomes another emotional stake that's fairly well used here.

Walton Goggins (Justified and The Shield) plays a man named Lawrence who's trying to break into the walled up city. He reminded me of Kuato from Total Recall (1990), both in motivation, disposition and appearance. He's a creepy character whose purpose just seems to bring down the wall and rail against the wealthy, the privileged and the protected but to what end is unclear. By the end, he's simply an instigator of action. 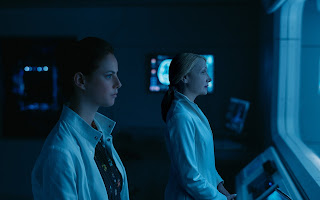 This is fine because it leads to action that is over-the-top and crazy but really fun. When these action scenes are broken down, it's really just a series of almost impossible escapes. It's escaping a train, escaping a tunnel, escaping a laboratory and escaping a city once all Hell has broken loose. How they do it is bananas, but it's entertaining. It wraps things up on a sentimental beat that admittedly got me. At the same time, O'Brien delivers a sentimental send-off that reminded me of how good an actor he is who hopefully will get better material in the future.

Available for DVD and VOD.