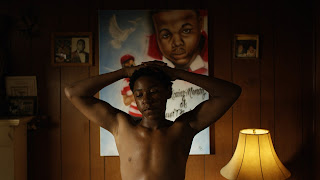 It doesn't seem so at first, but this movie trades on the same dynamics at times as John Singleton's Boyz N the Hood (1991). Instead of South Central Los Angeles, writer-director Amman Abbasi sets his movie just outside Little Rock, Arkansas in a rural area known as Wrightsville, the southern backwoods where there doesn't seem to be a lot for young people to do. Yes, Wrightsville is only 15 miles from Little Rock, but for impoverished black kids in that area, it can feel like 1500 miles away, particularly for a poor black boy who only has a worn-down bicycle and the only place to have fun is an open field where you can shoot your brother's secret gun. It's no wonder that the poor black boy in question can so easily be pulled into gang activity.

Most films about gang activity depicts such activity in inner cities. It's rare that we see gang activity in the country or rural areas of the south or elsewhere. There are films like Welcome to Pine Hill (2013), which is set near Brooklyn, or Jason's Lyric (1994), set near Houston, but most films involving black people in the country or in the south are about racism or civil rights. This film isn't about any of that. There aren't any white people in this at all. It's much like the recent, Oscar-winning Moonlight (2016) in that regard. Two recent films that come close to what Abbasi's film is doing are Lance Hammer's Ballast (2008) and David Gordon Greene's George Washington (2000). Hammer's film is about a depressed, black family that's more about a man dealing with suicide. Greene's film is more about children dealing with their own romantic feelings and the effects of mortality in very direct ways. 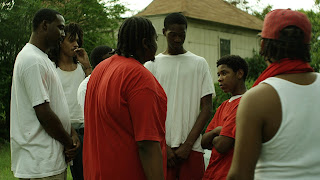 This film trades romantic feelings with feelings of brotherhood and expressions of masculinity. Yes, Greene's film has its titular character on the cover or poster flexing his muscle, but this movie double downs on that idea. After the opening scene, which shows the protagonist on his bicycle on an empty, rural road while voice-over narration descries his disillusionment with his circumstances in that rural area, the next scene or so shows the protagonist lifting weights on a bench press, dropping a lot of f-bombs and stripped nearly naked for a jumping in, as it's called, an initiation into the gang known as "The Bloods." All of that are boys literally flexing muscle and trying to prove their masculinity.

As is the case, all this aggression and violence upon each other are seen by those involved as brotherhood or a way of showing love in contrast to softer displays of affection. Devin Blackmon stars as Dayveon, the protagonist who's jumped into the Bloods due to losses in his own family or the literal loss of his brother, which pushes him toward these other brothers. Abbasi cuts to shots of bees in a hive, which demonstrates a need for a person to be a part of a collective or a group. The obvious, extreme poverty then pushes the hive to commit criminal acts, desperate for work and money.

At one point, Dayveon is so a part of the hive and this drive to flex his muscle that he can't handle or doesn't know what to do with expressions of love and affection that don't align with the gang beating him up. When an older guy who's dating his mom, Brian, played by Dontrell Bright, attempts to show him that love and affection, not through hitting but through hugging, Dayveon can't handle. He seems numb and unemotional or disconnected. 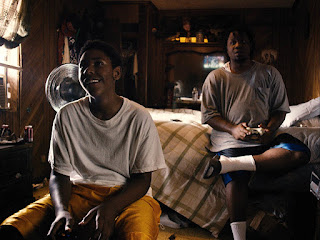 Yet, it could be a tactic when it comes to directing children or young actors. Sometimes, it could be easier to have them do nothing, and let the adult or older actor handle the heavy work, which Bright accomplishes, though the dynamic between Bright and Blackmon reminded me of the dynamic in Alain Gomis' Félicité (2017) between Papi Mpaka and Gaetan Claudia. Mpaka played Tabu, a man dating a mother in the Democratic Republic of the Congo. Claudia played Samo, the son of the woman Tabu was dating, which is the same dynamic between Dayveon and Brian.

The difference is that Abbasi's film lets us more inside the head of the son than in Gomis' film. In Gomis' film, the son was truly a blank slate or empty vessel with a barrier up that even the filmmaker would not or could not penetrate or truly overcome. Here, Abbasi's character does have a barrier up from his mother's boyfriend, but Abbasi takes time out to bring that barrier down and let us in the son's world. 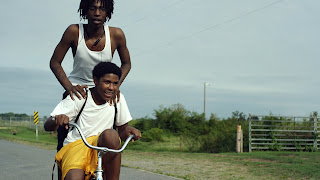 It starts with the aforementioned voice-over narration. It continues with sequences of simply following the boy around, as we see him be a boy, be playful, silly and stupid. Abbasi crafts sequences that feel inspired by Terrence Malick or that are very documentary-like in that it feels so naturalistic. The cinematography isn't as impressive or jaw-dropping as Malick but it doesn't need to be given its subject matter. The looks are hushed and more grimy than Malick, more akin to Southern Gothic. It also reminded me of one of my favorite films that follows a boy in the south, awash in poverty and family disconnection, Matthew Gordon's The Dynamiter (2013), a film that captures childhood expressions of masculinity as good as this one.