Adapted from a 2008 comic book series that became a graphic novel, this movie is about a prepubescent teenager, probably only 12 or 13 who imagines that creatures several stories tall are coming after her. If that sounds vaguely familiar, then you've probably heard of A Monster Calls (2016), which was an adaptation of a 2011 illustrated novel about a prepubescent child who imagines a really large creature visiting him.  This movie is essentially a version of A Monster Calls but gender-swapping the protagonist, although it could be argued that A Monster Calls is actually the copycat, given its source material came out after this one. Joe Kelly wrote the comic book series and got it published before Patrick Ness who wrote A Monster Calls. Both Kelly and Ness adapted their own works into screenplays. One key difference is that Kelly's creature is seen at first as something to fight and to kill, as the title suggests, whereas Ness' creature after awhile isn't meant to seem scary or even much of a threat, despite its look.

Ness' creature certainly isn't something like The BFG (2016). It looked like a mutant tree. Kelly's creature here isn't much better looking. Kelly's creature is like part of a mountain come to life, rock-like and evil. It's either like a wild animal or a demonic force, meant to cause harm, and violence is the only way to handle it. This is ironic because the protagonist, the one having to bring the violence here, is a girl. You'd think a boy would be the one instigating the violence, but that isn't the case in Ness' movie. It certainly is the case here. 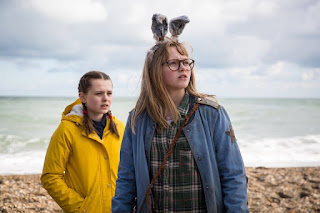 Madison Wolfe (The Conjuring 2 and Trumbo) stars as Barbara Thorson, a girl who attends Birchdale Middle School, in a beach town along the coast of New Jersey, but it doesn't quite look like the Jersey shore or feel like it, which made it not surprising that the film wasn't shot there. Barbara seems like she's Claudia from Party of Five. Claudia was a young girl being raised by her siblings because they're parents died in a car crash. Barbara seems like she's being raised by her older sister, Karen, played by Imogen Poots (Green Room and Fright Night). Yet, we never learn why Karen is doing so or what happened to their parents.

All we know is that Barbara runs around the woods and the beach setting traps for what she believes are giants hiding deep in the forest of even under the water but are in waiting to attack and destroy the town. Her traps are meant to lure the giants away or to a place where she can destroy them with a magic hammer, which she keeps in her tiny, pink purse. Now, despite the fact that Barbara sees these giants, no one else does, so this situation isn't like Jennifer Kent's The Babadook or Netflix's Stranger Things where one wonders if Barbara's giants are real or not. It's obvious that she's suffering from a mental illness or she's delusional. 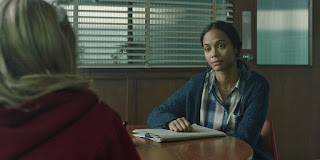 Zoe Saldana (Guardians of the Galaxy and Star Trek) co-stars as Mrs. Mollé, the school psychologist who regularly meets with Barbara about her issues, which are never made explicit. Eventually, Mollé becomes aware that Barbara is obsessed with these giants, but it comes too little, too late for this movie to deal with her illness or delusions honestly or directly. The movie makes her delusions text but never truly takes it seriously.

The delusions are supposed to be a coping mechanism for a trauma in Barbara's life, but the movie never foregrounds what that trauma is. In fact, it keeps the trauma as a surprise for the end of the film, which is a mistake. A Monster Calls never hides what the trauma was, which happened to be the fact that the protagonist's mother was dying. Given the similarities between the two films, it's not hard to guess what the trauma is for Barbara. 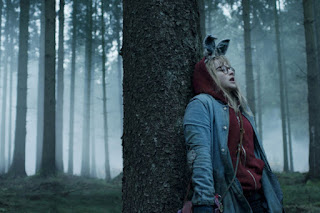 Director Anders Walter won the Oscar for Best Live Action Short Film at the 86th Academy Awards for Helium (2013), a movie about another prepubescent child who imagines things as a way of dealing with trauma or at least a tragic situation. That film never hid what the trauma or tragedy was either. I understand the point here is to show how Barbara isn't dealing with her trauma and she's hiding it herself, so Walter feels compelled to have his filmmaking and direction be selfsame, but it just felt gimmicky here.