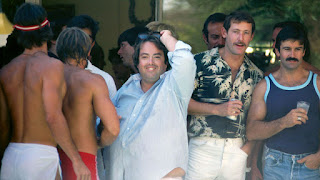 Jeffrey Schwarz is an Emmy-winning documentary filmmaker whose career has consisted of telling the life stories of gay men in or connected to the film industry. Some of his major works have been about Jack Wrangler, Vito Russo, Divine and Tab Hunter, stars or important LGBT media contributors in the 1950's, 60's, 70's and 80's. He continues exploring those kinds of people with this profile of Alan Solomon aka Allan Carr, a legendary producer who's best known for the musical Grease (1978) and the infamous 61st Academy Awards on March 29, 1989. Schwarz's film mostly catalogs Carr's experiences in that decade from the musical, which was his highest point, to the Academy Awards, which was arguably his lowest. Through this decade, we learn all the reasons why Carr was great and why his Oscars weren't.

What's interesting is that a few questions I had about Schwarz's previous feature are answered here. Schwarz directed Tab Hunter Confidential, which was an adaptation of the matinee idol's autobiography. Tab Hunter was a young, handsome actor in Hollywood in the 1950's who was arrested for basically being gay when a gay party was raided by the police. Schwarz's movie never really went into the details of how the party came to be, though one could probably have guessed.

Carr could be described as a trust-fund baby. He's a guy who was given or inherited a lot of money from his wealthy parents who were in the retail furniture business. He was obviously gay. Even though he never identified as such, he certainly wasn't shy. Personality-wise, he was very much a Truman Capote type. He was even a bit of a Steve Rubell type. If he wasn't already, he could have been friends with Liberace, but he wasn't a performer. He wasn't an actor or a musician, but he was very much a showman, flamboyant with a flaming capital F. 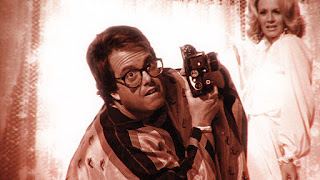 Because he loved movies and musicals, he wanted to be close or even inside those things, even if he knew that he couldn't be a performer or a star himself. He instead decided to be a star-maker. He started throwing parties and schmoozing to further that idea of being amongst the stars and also creating them. The parties were also Carr's way of attracting young, gay men for his pleasure. If Carr had been born 10 or 20 years earlier than he was, he could have been the guy who invited Tab Hunter to the party where he was arrested. I still would like to know how the invites go out to all those young, gay men, especially in a time prior to the Internet.

However, Carr's personal life in terms of intimate relationships are glossed over here. It's most likely that Carr had no long-term boyfriends. The movie comments on Carr's self-esteem and weight issues, which could have contributed to a lack of boyfriend or lover in Carr's life. There is a passing reference to him losing his virginity in Mexico, but that's about it. Yet, the focus for the most part is Carr's professional life, his Hollywood career as it were, the ups and downs in La La Land. Carr was ultimately a film producer and any film producer will tell you that there are hits and misses, and sometimes, a person can recover from the misses. Sometimes, a person can't.

There is a term called "movie jail." The term isn't used in this documentary but that's essentially what happened to Carr. Movie jail is when a producer or a director can't recover, at least not for a long while. It's when he or she has one too many misses or when he or she has a miss that is so astronomical that it causes the collective Hollywood to back away from that person. Sometimes, a producer or director can go to movie jail if their movie bombs at the box office, if the movie gets the worst critical reviews, or if it's due to personal interactions, which can create what's called creative differences, hostile environments or aggressive and possibly criminal acts. 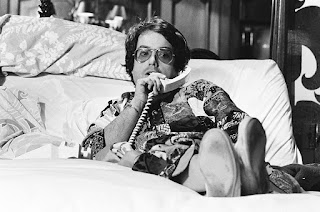 Since the Harvey Weinstein scandal, we've seen several producers go to "movie jail" for their possible criminal acts like Kevin Spacey, John Lasseter and even Brett Ratner who unfortunately is featured in this movie. Obviously, Schwarz interviewed Ratner prior to the rape and sexual harassment allegations that came out starting in October 2017 against Ratner. In fact, Schwarz's movie premiered in May 2017 at the Seattle International Film Festival, so Schwarz couldn't have known to ask Ratner about such things.

However, Carr was himself put in so-called movie jail after producing the 61st Academy Awards, which was savaged in the media and then rebuked by the Academy itself. Coincidentally, Ratner was also a producer for the Academy Awards. Ratner was a producer for the 84th Academy Awards. Ratner was fired or had to resign because of an anti-gay remark he made in 2011, a few months before the telecast. Yes, this movie is about Carr but to include an interview with Ratner and not mention the related 2011 incident seems like more than an oversight. 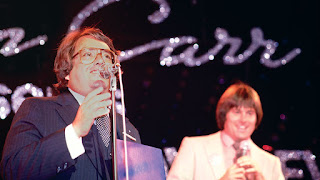 Otherwise, this movie feels like a combination of The Kid Stays in the Picture (2002) and the Comedy Central, animated spin-off, Kid Notorious (2003). It's more so the latter as Carr is at times described as a cartoon character, but Schwarz also utilizes animation akin to the style in Kid Notorious. Schwarz's movie isn't as much told in first-person as Robert Evans does in The Kid Stays in the Picture. Yet, unlike most film producers, Carr did a lot of interviews throughout the 70's and 80's, which Schwarz utilizes very well, so Allan Carr can feel ever-present here. It's enough that you do feel like you get a true sense of who he was. For those who are cinephiles or Broadway-enthusiasts, you'll enjoy this romp through iconic creations in film and theatre with some behind-the-scenes gossip, as well as some Hollywood-changing moments. At the same time, fans of queer history will appreciate this sojourn into this influential figure's brief time.

Not Rated but for general audiences.
Running Time: 1 hr. and 30 mins.

In theaters in Los Angeles on June 1.
Available on DVD and VOD on June 5.