When I reviewed Proud Mary, which came out five months ago in January, I commented on the lack of black women or women of color as action stars. Aside from the occasional film from Halle Berry, it has been a rare occurrence. This year seems to be a turning point because last month in April, we had Paula Patton in an action thriller called Traffik. The month before that in March, we had Storm Reid in A Wrinkle in Time. The month before that in February, we had Gugu Mbatha-Raw in Netflix's The Cloverfield Paradox. That's been a film every month this year with a black woman as the lead in a big-budget, action flick. If you want to count Danai Gurira in Black Panther, then it's been a half-dozen already of films led or featuring black women in prominent roles where, as they say, the black women kick ass.

Gabrielle Union (Think Like a Man and Being Mary Jane) stars as Shaun Russell, a wife and mother of two children. When her father dies, she inherits his large home and estate in Lake Constance, Wisconsin. Due to her father being a possible Bernie Madoff type, she wants nothing to do with the house, which is tucked hours into the woods. She plans to spend the weekend there and prepare the house for the real estate agent to put on the market.

Billy Burke (Zoo and 24) co-stars as Eddie, the leader of a group of criminals who plan a home invasion in order to steal millions of dollars of cash that Shaun's father hid in a safe inside the house. He is very calm and methodical about how he operates and how he orders the others around, almost as if he has a military background, but not much is learned about his character besides he wants that money and isn't leaving without it. 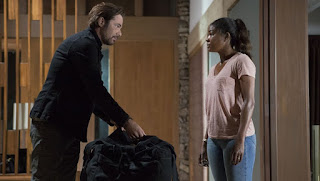 Simply due to the nature of this movie, some interaction with Eddie feels required, which makes this movie not the kind of home invasion flick akin to The Strangers (2008) where it's meant to be sheer horror and possibly slasher in nature. Yet, this movie is comparable to something like Mike Flanagan's Hush (2016), except the disability isn't that the woman can't hear. It's that she's a mother, but like Flanagan's film, the point is to show how that isn't a disability at all. This movie also has the same intention as the recent, Halle Berry vehicle, Kidnap (2017), where the goal is to show the lengths a mother will go in order to save her child or in this case children.

That Halle Berry film was more an endurance test and an adrenaline rush. It was more about the energy that a mother has to summon, the instinct to keep going or to keep running no matter how far, no matter how tired. It was all about sheer determination. This movie is less about that kind of raw fortitude and more about strategy and outwitting your opponents. It's less about any kind of physical dexterity or stamina and more about cleverness and quick thinking. However, Union's character does have some fight scenes and she does exhibit some ninja moves, but, at no point does she become Wonder Woman. She either takes hits and ducks or finds scrappy ways to escape the moment. 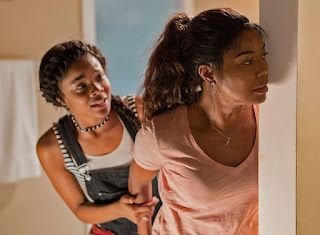 It also helps that the house is large and very technologically advanced. It also helps that she's dealing with men who don't have guns. All of the men, except Eddie, don't have guns, so it makes dealing with them somewhat more feasible. She also doesn't have a gun herself, though she keeps remarking how paranoid her father was, but the fact that he didn't have a gun in his house seemed odd for someone that paranoid who is revealed to be a criminal too. Yet, unlike the recent Death Wish (2018), this movie probably didn't want to make the argument that a gun is the solution to all problems, even ones of extreme violence.

Ajiona Alexus (13 Reasons Why and Empire) also co-stars as Jasmine, the teenage daughter to Shaun who is held hostage but holds her own in terms of reassuring her little brother Glover, played by Seth Carr (Black Panther and Brooklyn Nine-Nine) and standing up to the bad guys when she has to do so. Alexus is the kind of actress that we should definitely keep an eye out for.