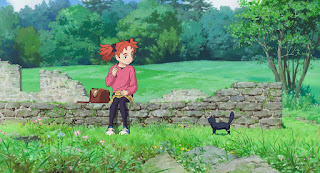 A lot of the Japanese animation that makes it here to the United States have come by way of Studio Ghibli, which is considered the Walt Disney of Japan. If you look at some of the films from Studio Ghibli, a few of them fit into the princess and fairy tale mold. Most follow children on a magical adventure and this one is no different. The exception is that it's not Studio Ghibli. It's instead Studio Ponoc, a new animation company that was founded by people from Studio Ghibli. The style and techniques are basically the same though. One probably couldn't tell that it's not from the mind and hand of Hiyao Miyazaki. Instead, it's from the mind and hand of Hiromasa Yonebayashi, the recent Oscar-nominee for When Marnie Was There (2015). Yonebayashi is adapting the children's novel The Little Broomstick by British author Mary Stewart.

Aside from a wealth of animated films, there's also a good number of live-action films that spring to mind. One recent, potential blockbuster is A Wrinkle in Time by Ava DuVernay. It's about a young girl who goes on a magical and part scientific adventure. Yonebayashi's film is at its core the same thing. This film is better written in that it's very simple but yet still wondrous and more affecting emotionally. It doesn't feel as disjointed as DuVernay's film. It's not as ambitious as DuVernay's film. It uses ideas and iconography that's more familiar, so that helps it. DuVernay's film was based on a popular book but culturally speaking, more people know a flying broomstick more than they know what a "tesser" is. 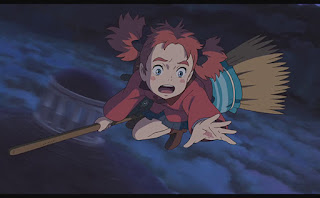 A flying broomstick is associated with witches and magic. The Wizard of Oz (1939) has the famous Wicked Witch of the West on a broomstick. Of course, that movie has its titular magician, but this movie has real wizards, although the focus is on the women and girls, the so-called witches. This film is essentially Harry Potter and the Sorcerer's Stone (2001) meets Alice in Wonderland (1951). It leans more toward Harry Potter. The goal though is the rejection of magic as an accepted thing in one's life. Thematically then, it was more like the opposite of Harry Potter. Magic is just a proxy for the assumption of power and the subjugation of people and things.

Otherwise, it's a very simple story, a simple adventure for a young girl not unlike Dorothy or Alice from the aforementioned films. She can't ultimately rely on others, although others do help, but, in the end she has to rely on her own wits and determination to get through or solve problems. Like with A Wrinkle in Time, the girl gets to rescue the boy and it can be empowering as a tale for members of the female persuasion.

Rated PG-13 for some action and thematic elements.
Running Time: 1 hr. and 42 mins.