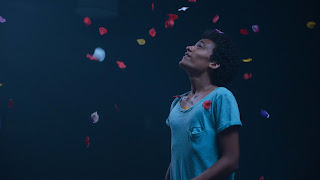 In March, Greg Berlanti's Love, Simon was released in theaters. Many noted that it was the first, major Hollywood film to be given wide distribution to focus on a teenage or young gay male in high school or around that age. It was an adaptation of a YA novel. Hollywood has adapted many YA novels. Some have featured LGBT or queer characters but none that have been the protagonist with a major studio like 20th Century Fox behind it, plastering it across 1,000 or more theaters. Berlanti's film is a landmark or a signpost in that regard. However, if you're a person who doesn't care about Hollywood box office numbers, then Berlanti's film isn't a landmark at all. In terms of sheer cinematic quality, it doesn't compare or even come close to recent LGBT or queer films like Call Me By Your Name (2017) or Moonlight (2016). One reason why Berlanti's film doesn't come close is how sexless it is. Some people comment that Berlanti's film was like John Hughes' Sixteen Candles (1984). Hughes' film has been criticized for how racist and derogatory it can be, especially when looking back at it. So, is it really the film that filmmakers today should look toward to emulate? Instead, why not emulate something like Easy A (2010), a movie that has a better grasp on teenage sexuality today.

The amazing Joey Pollari from the second season of ABC's American Crime was featured in Love, Simon, so I can't hate that movie too much, but, as I said in my review of Love, Simon, there are plenty of independent, art-house or foreign films that accomplish what Love, Simon accomplishes but in more interesting ways and bolder ways that isn't so sexless and vanilla. This film by writer-director Damon Cardasis is one such example. It focuses on a teenager in New York City dealing with the same things as the titular character in Love, Simon but it feels more real, more authentic. There aren't any romantic comedy-type gimmicks or plot tricks or obvious deceptions that are a staple of  those kinds of movies. It gives us a verisimilitude that Love, Simon doesn't even come near. Berlanti is fully aware that he's giving us a bland, neutered fantasy in a weak attempt at normalizing same-sex attraction. Cardasis, however, isn't as shy or as weak.

The fantasy in Bertlanti's film is the lack of homophobia mixed with a lack of bravery to explore homosexuality. It's possible for a young gay man still in high school to remain celibate and not talk about his sexuality with anyone or attempt to explore it, even if he comes from a home that is totally positive and progressive. It's possible if that young gay man doesn't have access to the Internet as it is now and he's stuck in a rural area. That is certainly not the case in Berlanti's film, which suggests an internalized homophobia not prompted too much by external forces. This suggestion is fine, as it's sometimes true, but Berlanti's film never really examines that internalized homophobia with the exception of a scene with Clark Moore who played Ethan, a black, gender non-conforming student who is the only openly gay student and is clearly way more effeminate. That scene is brushed over rather quickly. This is not the case in Cardasis' film. 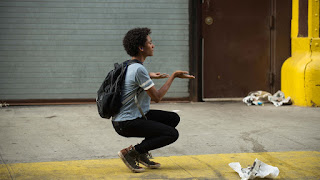 Luka Kain stars as Ulysses, a 14-year-old black kid in New York City. He has an 8-year-old brother named Abe. He has a mom who works multiple jobs, especially since at the beginning of this movie Ulysses' father dies. To help take care of him and his brother, his aunt Rose comes to stay with them. Things become tense when Rose discovers that Ulysses is dressing in women's clothes. From there, Ulysses is sent on a journey that in some ways could possibly be compared to Homer's Odyssey.

Ulysses is introduced to a group of homeless LGBT or queer youth. He discovers that despite their circumstances, they have one refuge. On Saturdays, there is a church in lower Manhattan that allows these LGBT youth to congregate and have a warm meal and shelter. Most of whom are black or Latino. Ulysses gets to know some of them and what they've experienced, as he comes to experience it too. At the same time, he also learns that they have a tradition that comes from the Harlem ballroom scene, sometimes called ball culture or voguing. It's in part drag or cross-dressing and it's in other part a type of dancing that mimics a model's catwalk on a fashion runway.

Paris is Burning (1991) is the controversial documentary that first illuminated ball culture. Since then, there really haven't been much that takes us into that culture again, narratively or otherwise. Patrik Ian-Polk's Noah's Arc (2005) touched upon it briefly. Sheldon Larry's Leave It On the Floor (2011) was probably the best narrative example of ball culture but set in Los Angeles. Larry's film really delves into that culture, whereas this movie mostly dips its toe in that culture.

Like Larry's film, this one is quite musical. There aren't Broadway-style dance sequences. Most of it are just the actors belting out lyrics while sitting and it's more about the vocals. Kain has a good voice, but so do the supporting cast members who get songs. MJ Rodriguez who is transgendered in real-life plays Ebony, a transgendered teen who is the first to befriend Ulysses. Marquis Rodriguez plays Raymond, a gay teen who becomes romantically interested in Ulysses. Both Rodriguez actors gets songs and both deliver on the sounds.

Margot Bingham (Boardwalk Empire and She's Gotta Have It) co-stars as Amara, the mom of Ulysses. She gives a great performance of a woman conflicted about her son's sexuality or gender expressions, as well as one tired from trying to work and support two teenage boys. She gets a song too and is very superb. 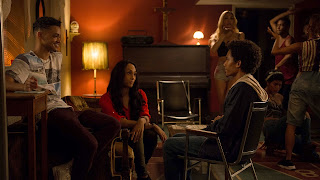 The movie is superb in its sense of discovery. It discovers a corner of the gay community that is often not seen. Despite Love, Simon being about discovery or solving a mystery of who is gay and who isn't, it doesn't have the true sense of discovery or insight into any slice of the gay community beyond the stereotypical. Walking away from this film gives a better understanding of what it is to be queer. Berlanti's film misses it completely. It wants to argue that being queer or being gay is no different from being straight as it were, but, without illuminating the distinctions, one misses the point. Cardasis doesn't make that mistake here.

If you want to see more distinctions that are just as, if not more interesting and not bland, check out Pariah (2011) or Naz & Maalik (2016).