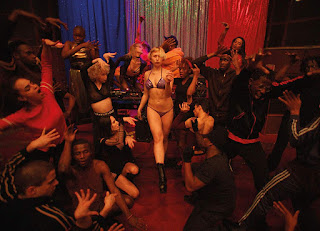 The way this film begins sets it up to be like Wim Wenders' Pina (2011). It could have been 100 minutes of dancing with no plot or narrative but just the conveyance of character and emotion, simply through bodily movements or location-backdrops. Writer-director Gaspar Noé almost does the same thing. It is true that the majority of this film is dance choreography. Yet, all of it takes place in one location, a dance hall or night club. It looks like some kind of open space for dancers to rehearse with back rooms for changing or resting, but the main area is a wide-open dance floor with a table set up for a DJ and another table for snacks and refreshments. Within this space, we watch as about a dozen or more, French dancers perform and then party, which is basically the entirety of this film, with occasional breaks for moments of dialogue and incidental action.

How Noé chooses to shoot and edit this film is akin to Alejandro Iñarritu's Birdman (2014) or Sebastian Schipper's Victoria (2015). It's done with a series of long, continuous takes. It's not trying to seem like one, long take as Birdman and Victoria try to seem. Noé has stitched together four, long takes that are obviously distinguished. The stitching of those, long takes are done with moments of dialogue that suggest a plot and some character, but nothing as intricate, detailed or nuanced as either Birdman or Victoria.  Noé seems to want an experiential film, as he's done with his previous works, but with glances or brief injections of character. The choreography and the improvisation, at times, of the dancers are what's most on display. Those glances or brief injections aren't enough to make this a satisfying film, but it's enough to keep anyone watching on the edge of their seat. 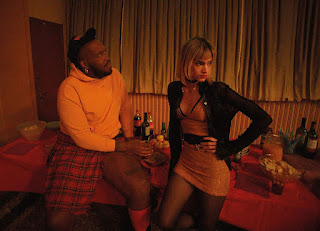 Sofia Boutella (The Mummy and Star Trek Beyond) stars as Selva, one of the dozen or more dancers performing and partying the night away. After the group does their huge dance number, they all shuffle around, sometimes dancing by themselves, sometimes in pairs. They free-style the rest of the night. However, Selva notices that something is wrong because everyone starts behaving strangely. She and the rest of the dancers realize that the Sangria that was made as part of the refreshments had been spiked with LSD. The film then becomes what they do while on this hallucinogenic drug and if any of them will survive the night. It's a bit contrived because at no point does anyone try to leave, even though they're not locked inside. Nor does anyone try to call the police. Not everyone has drunk the Sangria, so the fact that no one calls the police is a suspension of disbelief one has to make in order to go along with this film.

Because this film is juggling a dozen or more dancers, it's difficult to get to know them in the structure that Noé has chosen here. Beyond Selva, we get glimpses of that dozen through the pairs that Noé cuts between during a rather breathless montage. Not much is learned about them, except their sexualities. Their brief conversations and moments together are all about sex and having it in various ways or combinations. The later action will involve sex and particularly violence related to sex. 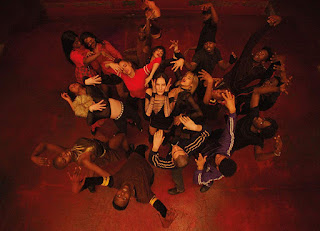 It's also no surprise that some, if not a lot of the dancing involves sexuality. There's wild bursts of energy on the dance-floor. It's fast and aggressive with a lot of gyrating and thrusting that's very akin to sexual movement. It culminates with almost everyone writhing on the floor, some even on top of others. It devolves into animalistic behavior. This perhaps would have been interesting to watch. Yet, Noé's camerawork by the end similarly devolves into something that is barely coherent on screen. His camerawork becomes an upside-down, red, muddy image that seems designed to induce seizures than convey anything substantial visually.

While the ending is a total mess that had potential, especially when it comes to queer sexuality and even incestuous relations, it still doesn't take away from the very compelling first half of this film. The dancing and dancers therein are pretty incredible to watch. The choreography is better than anything seen on the big screen thus far, including everything in Rocketman.