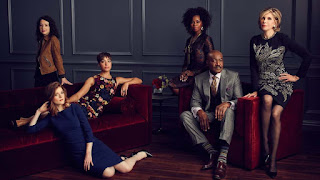 This spin-off of CBS' The Good Wife continues to be a very strong and very entertaining show, even in its third year. This season though feels like a transitional season. This season is darker than the previous seasons and darker than The Good Wife, in some cases literally with cinematography and lighting that casts so much more shadows. Yet, it's also more animated and in some instances brighter than previous seasons. Literally, there are animated sequences injected in almost all of the episodes this season.

The show is still a legal drama that follows the lives and cases of a Chicago law firm. The show is also a political drama that is very much about a woman who is really against President Donald Trump. She's a hardcore liberal, but the show is good to give balance and depict those who support Trump or at least support conservative ideas or the Republican party in ways that aren't unfair or totally demonic. However, whenever there is a specific legal issue or even a political concept that is spoken on the show, the show this season will inject a brief animated short film, done to a song. These animated short films are in the style of the cartoon series Schoolhouse Rock! (1973). They're highly informative and highly funny. Plus, the songs created for them hopefully will be eligible and in fact nominated for Emmy Awards. 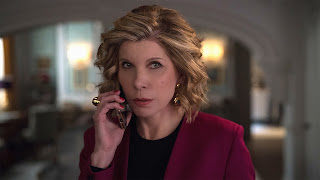 Christine Baranski (The Good Wife and Mamma Mia!) stars as Diane Lockhart, a white woman over the age of 50 who is a partner at a predominantly black law firm called Reddick, Boseman & Lockhart. She's a Democrat, but her husband is a Republican named Kurt McVeigh, played by Gary Cole (Family Guy and Office Space). They differ politically, but they love each other. Diane mainly uses her work to advance her politics, but she watches the news and sees things aren't really getting better. This season, she decides to join a group of women whose goal is to get Trump out of office, mainly through trying to sway the vote in 2020.

The group meets in secret and mostly works under the radar. A lot of their work happens online. Diane enjoys the progress that the group accomplishes and the aggressiveness with which it operates. However, it gets to a point where the group's tactics become really questionable and there is a real push-and-pull about whether or not the group is behaving like the Trump campaign and administration, as well as whether or not it should behave like the Trump campaign and administration. 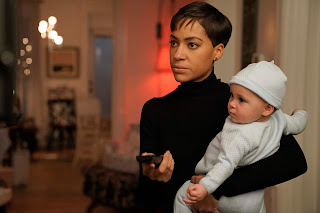 Cush Jumbo (The Good Wife and Torchwood) co-stars as Lucca Quinn, an associate at the firm. Last season, Lucca had a baby by a white politician whose absent this season but whose mother shows up to help Lucca with child-care. She juggles motherhood and her career. As a biracial woman, she also deals with racial issues. She does so with aplomb, but even she has her limits. We see her deal with racial issues just out-and-about in Chicago in ways that touch upon recent incidents in the news, such as the incidents involving white people calling the cops on black people for no reason. It surprises Lucca but makes her more aware of racial issues, even at her own firm.

Her firm is a predominantly, African-American firm in terms of ownership and employment, but Lucca becomes aware of a change in her offices. There are an increasing presence of white lawyers at the firm. This brings up a lot of conflicts and tensions between the races. Seeing the series deal with those conflicts and tensions is interesting. It makes the show not only topical and relevant, but also fresh in a direct way that not many shows are or do. 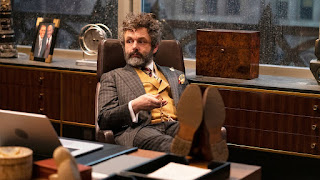 At the Tony Awards, host James Corden made a joke about how so many Broadway stars pop up on NBC's Law & Order or one of its various spin-offs. It's an old joke that needs to be updated because Broadway stars are popping up more and more on this series too. Some of those stars include Tony-nominee Delroy Lindo who plays Adrian Boseman, one of the named partners at the firm, and Tony-winner Audra McDonald who plays Liz Reddick, the other named partner at the firm. There are many others, too numerous to mention them all, but two interesting names who pop up briefly include Tony-winner Katie Finneran and Aaron Tveit who has done several, Broadway musicals.

Michael Sheen (Good Omens and Masters of Sex) plays Roland Blum, the antagonist or chief rival of this season. He's a crazy and rather ridiculous character. He's more a caricature than anything else. His threats against the firm don't create the kind of dilemma that previous seasons have presented. The kind of danger here wasn't as strong or as powerful as we've seen in the past. The racial tensions within the firm were way more engaging, but they get pushed aside for Roland's antics and ultimate fight. 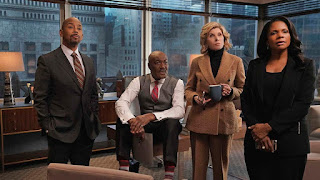 Regardless, the series is incredible. It's one of the most compelling things on television, continuing the momentum from The Good Wife, which was one of the best legal dramas ever created and certainly one of the best TV shows of the past decade. I look forward to every episode and every season.