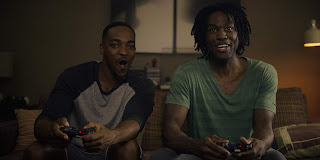 The hit, British series arrives in time for Pride Month 2019. The first episode of this season is one that might fit into the month. June is the time for gay pride, but it's really for the entire LGBT community. However, the letters should be LGBTQ with the Q standing for either "queer" or "questioning." Some might ask what's to question. The core of Pride Month is people accepting and indeed celebrating same-sex attraction and/or gender expression that may or may not conform to a person's birth. In order for that to happen, some people have to first question if they have same-sex attraction or gender non-conformity. The first episode entitled "Striking Vipers" attempts to address that kind of questioning. It does so in the typical way that writer and series-creator Charlie Brooker does. Unfortunately, he aims for the LGBTQ target, but what he hits instead isn't even close to a bull's eye. He addresses the letter of that kind of questioning or queerness but he doesn't quite get the spirit.

Anthony Mackie (Captain America: The Winter Soldier and The Hurt Locker) stars as Danny, an office worker who marries his college girlfriend and has a son. He loses contact with his roommate. He used to bond with his roommate though over marijuana and video games. Their favorite is a two-person fighting game called Striking Vipers, which is akin to Street Fighter. After years go by and he gets older, Danny becomes resigned to a mundane and boring, suburban existence as a parent. Things change when his roommate who's been absent from his life for some time returns for his birthday barbecue with a new game. 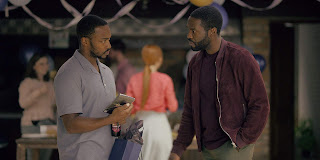 Yahya Abdul-Mateen II (Aquaman and The Get Down) co-stars as Karl, the aforementioned roommate and a man who apparently is making better money than office work. He lives in what looks like a penthouse apartment with a great view of the city. He seemingly works in the music business. He's probably a hit record producer. He acts like he's straight. He has sex with women, but he does exhibit some behavior that would make James Earl Hardy raise an eyebrow.

Like in Season 4 and the episode titled "USS Callister," Danny and Karl are able to enter a virtual reality world that feels and looks totally real. Unlike that episode, this one has no interest in exploring the depths or limits of this virtual reality. They fight in the game, but the physical damage doesn't ever do real-world, physical damage, but they can feel the sensations as if they were real. The game therefore exists merely as a fantasy realm where they can be avatars of various characters, including animals. Where the episode goes is supposed to reveal something about the two men and perhaps modern life, but I wasn't convinced. 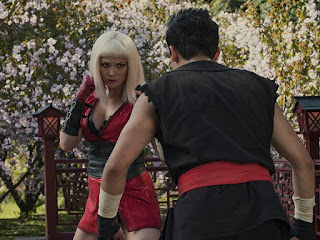 Danny chooses to be a male, Asian kickboxer or karate expert named Lance, played by Ludi Lin (Aquaman and Power Rangers). If this were Street Fighter, Lance is possibly akin to Ryu. However, Karl chooses to be a female, Asian martial artist named Roxette, played by Pom Klementieff (Guardians of the Galaxy Vol. 2 and Oldboy). Roxette is possibly akin to Chun Li. Lance and Roxette fight each other in a very exaggerated, over-the-top way. The twist is that at the end of the fight, Roxette kisses Lance, which means Karl kisses Danny.

It's never clear if this was Karl's plan all along. It's not clear if Karl gave Danny this VR game in order to lure him into having sex through their avatars. The first, two times, it's Karl's avatar who initiates. Danny goes along because it must feel good, but he's always the hesitant one. It then becomes like a drug addiction or porn addiction, but Danny is able to walk away, whereas Karl obsesses. Yet, it starts to affect both, as both men detach from their real-world, female partners, but Karl is more into it, which suggests Karl has latent homosexual tendencies. It's not to say he's gay but he could be the Q in the LGBTQ. 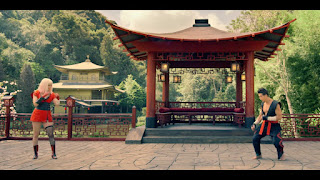 The end of the episode suggests he can't act upon those tendencies in the real-world. The ending suggests he can only have it in this fantasy world, which makes the fantasy world a kind of digital closet. Given that Brooker's series is mostly bleak, pessimistic, cynical or dystopian, the ending makes sense. Except, the ending is supposed to be celebratory, almost as if it wants to mimic the tone of Season 3's episode titled "San Junipero."

That episode was probably the most romantic. "San Junipero" also created a kind of digital closet, but the point was that the two women in the center of that episode were overcoming a physical limitation that they would have acted upon in the real-world if they could. That's not the case for Danny and Karl. There is no physical limitation, but when they do kiss in the real-world, it's treated as not feasible or desirable. The only sex therefore is the heterosexual sex between Lance and Roxette. 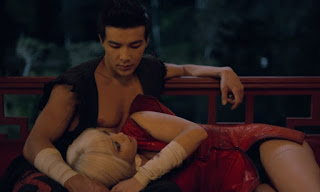 It's not to say that people can't role-play. A lot of people take on different personas or identities during sex. It's fine and it's healthy, but if it's the only way that they can have sex together, without being themselves, that isn't healthy. Danny and Karl are willing to engage in the sex but only through a layer of unreality that denies the same-sex attraction not celebrates it.

The other wrinkle is the fact that Karl's avatar is a different gender. Danny's avatar is the same gender as himself. Karl is put into another body presumably experiencing things he's never felt before. This would be fertile ground for someone who is transgendered. Yet, Brooker's script never considers what the true difference is in Karl's feeling as himself as opposed to his feeling as a woman, specifically the feeling of instantly not having his penis but instead a vagina. Does he have orgasms and does those orgasms result in ejaculation?

Danny never considers changing his avatar and being a woman too. Karl insists that he can't have sex with any one or any thing else in the game. Karl says it's only satisfying when he's having sex with Danny as Lance, but that idea is never really challenged. What if Danny picked another avatar like a female avatar for example? Does Karl have to be Roxette? What if Karl picked a male avatar? Brooker's script in that regard never considers anything beyond the initial setup. Therefore, there's no exploration of sexuality and gender at all. It's actually a kind of queer-baiting, or else it's a kind of "no homo" but done in Brooker's mind as being progressive when it's not.

On a side note, Danny is a Black man. His avatar is an Asian man. Brooker's script never explores the idea of what it would be like for a Black man to all of a sudden become an Asian man. There is a moment where Danny who allegedly isn't in good physical shape comments on the fact that Lance is super-muscular. However, much like Tom Hanks' character in Big (1988) who checks out his penis after finding himself in a new body, it's odd that Danny doesn't check ever out Lance's penis. Not to sound crude, but a Black man and an Asian man might have different penises. Given that this episode is about sex and sexuality in theory, that should have at least been a joke, if not an actual dramatic point. 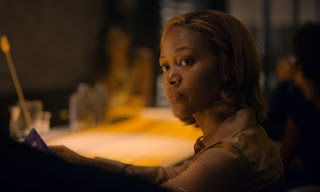 Nicole Beharie (Sleepy Hollow and Shame) is good as Danny's wife who becomes frustrated by her husband's detachment, but she's loving and supportive of Danny. It would have been nicer though if we got a scene of her talking to him about what he was doing, but Brooker skips over that scene as well.

This season of the show has only two other episodes. The second episode is "Smithereens," which is an episode about guilt and grief.  It goes to extremes basically to criticize social media companies and people's seemingly addiction to them. The third episode is "Rachel, Jack and Ashley Too," which features Miley Cyrus, playing a version of herself that turns out to be pretty funny. It simply felt too long as it takes too long to get to its comedy.