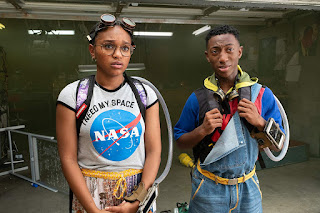 As I pointed out in my review of Kin (2018), last year was a very significant year in terms of African-American representation, specifically having young black people as the lead in blockbuster films, especially blockbuster films that dealt with science-fiction. The head of the pack was Black Panther. Included in the list are The Cloverfield Paradox, A Wrinkle in Time, Pacific Rim: Uprising, The Darkest Minds, Kin and Spider-Man: Into the Spider-Verse. We'll see if this year continues the trend of putting black people or people of color into the lead roles of big-budget action or sci-fi flicks. We've had a couple so far like Captive State (2019) and Pokémon: Detective Pikachu (2019).

Stefon Bristol is the director and co-writer with Fredrica Bailey also co-writing. Bristol is adapting his own 2017 short film of the same name, which sees two teenage black students in New York City inventing a time machine. The catch is that the time machine can only take them into the past and only back in time a day or at most a week. When the brother to one the black students is killed, the students come up with the idea to travel back and try to prevent the brother from dying. 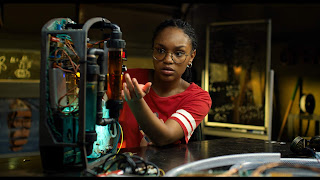 Eden Duncan-Smith stars as Claudette Josephine Walker aka "CJ". She's a strong-willed and stubborn, young woman. She doesn't allow any one to push her around. She's not afraid to jump in someone's face. She demands what she wants and isn't afraid to go after it. She's currently attending the Bronx High School of Science. She reads Stephen Hawking, seemingly for fun, and she wants to go to school at MIT.

She has a friend who is a boy and that boy helps her on her time-machine, but she is the protagonist for the most part. As a young female protagonist, it's good that this movie doesn't fall into the trap of having her engage in some kind of romance. She has a strong platonic relationship with her male friend. There's also a pretty strong relationship with her brother. Those relationships are held up mostly by the performances of the young actors. The script and direction from Bristol doesn't help fill out those relationships. 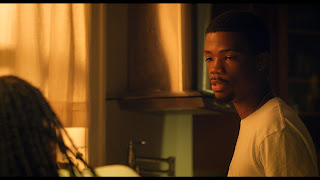 Astro aka Brian Bradley (Red Band Society and Earth to Echo) co-stars as Calvin Walker. He might seem like a thug, but he's actually a good kid and the older brother to CJ. He doesn't hang out on the streets. He actually has a steady job at a Texas BBQ joint. While walking home with his friend, police shoot and kill Calvin. They say when he reached for his cell phone, they thought it was a weapon. This movie then becomes a Black Lives Matter issue and CJ comes up with a plan to go back in time and save CJ's life.

Given where this movie goes, Bristol's message seems to be a bleak one or highly pessimistic. If Bristol is commenting on Black Lives Matter, his commentary also seems rather bleak. The idea of going back in time to somehow stop a needless death of an unarmed black man is tempting, but Bristol's film suggests that nothing can be done to stop it, not even having the power of time travel. This is perhaps an accurate reflection of how people feel about the issue overall. Bristol's film underscores that idea by giving his protagonist a veritable super-power and still not being able to do anything to prevent this kind of death.

With a cameo by Michael J. Fox, there is a direct reference to Back to the Future (1985), probably one of the most seminal films about time travel. While changing the timeline shouldn't seemingly be an easy thing. There comes a point where the film becomes a version of "Treehouse of Horror V," the episode of The Simpsons back in 1994 where Homer Simpson has to keep going back in time over and over in an almost futile attempt to fix things. Here, instead of being Michael J. Fox's character, CJ is Homer Simpson, but it's unclear to me the message Bristol is trying to send with his final scene and indeed final image. 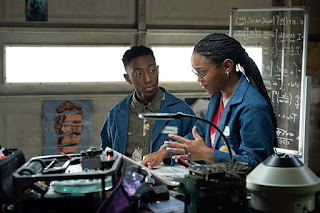 People can probably interpret it in one of two ways. The obvious way is as mentioned the more pessimistic route. It also makes CJ by the end a more pathetic character, but an understandable one. Her drive to keep going back in time over and over is understandable. Another interpretation is that it's even commendable. Her willingness not to give up and save black men from needlessly dying is one that a lot would share. The film gets to a point where that drive or willingness will always hit a brick wall no matter what and it just doesn't seem as if that's the sci-fi film this was set up to be.