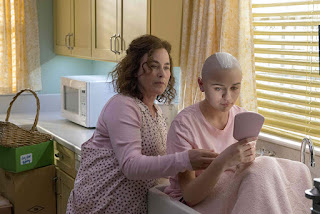 Last year, ABC's 20/20 aired an episode titled "Gypsy Rose Blanchard." The episode was about the death of Blanchard's mother in June 2015, as well as Blanchard's own disappearance from her home in Missouri. The story of that death and disappearance form the basis of this adaptation by Nick Antosca (Hannibal) and Michelle Dean, a Canadian journalist who wrote about Blanchard. It falls in line with a lot of crime dramas that have won Emmys in the category of Outstanding Limited Series, whether the series is based on true crimes like The Assassination of Gianni Versace or fictional crimes like Big Little Lies. Based on the filmmaking and the acting, which are both top-notch, if not totally exquisite here, this series is also worthy of Emmys. The majority of the kudos should go to the two central, female performances. Both of whom deserve all the awards recognition they hopefully will receive.

Joey King (Fargo and The Conjuring) stars as Gypsy Rose Blanchard, a young girl of indeterminate age. She seems like she could be a minor under the age 16 but there's a question of if she's 18 or older. She speaks like a baby doll and as if she's of limited intelligence, due to some kind of mental disability. What isn't indeterminate is that she looks as if she has a physical disability as well. She's literally seen in a wheelchair. She either can't or has difficulty walking. She also doesn't eat solid food. Instead, she has a feeding tube on her stomach, which requires her food to be liquefied in a blender and pumped into her with a machine. 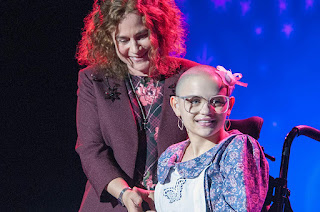 She at first glance seems like she's a girl who requires constant care. The idea of her living by herself seems as if it's an impossibility. Her caregiver is her mother. They reside in a house built and funded by Habitat for Humanity. They moved to southwest Missouri from Louisiana after and because of Hurricane Katrina. Gypsy Rose and her mother are both new and don't have any friends, so they mostly keep to themselves with Gypsy Rose existing as a recluse or shut-in, but not necessarily by choice. 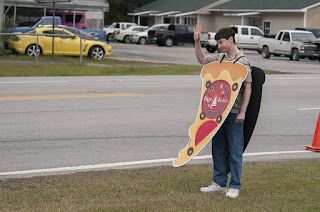 The first half of this series is basically an exploration of that syndrome, the co-dependency and what might amount to medical abuse. It sets up a kind of warped, mother-daughter relationship, such as ones depicted in An American Crime (2008) or Precious (2009), but a relationship that isn't really rooted in physical violence but mental or psychological violence. Some might not see mental violence as bad as physical violence. It's easier to point to the physical scars and not the mental ones. Yet, that's no excuse for what turns out to be the murder of Dee Dee Blanchard. Antosca and Dean, as well as their writers and directors, are aware of that and don't make excuses, but they do better put us in the heads of these people, then the makers of The Assassination of Gianni Versace. 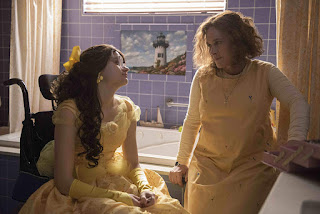 This series even references Bonnie and Clyde. Yet, that's not the comparison I would make. Gypsy Rose and Nick aren't criminals who are embracing a life of crime because of some inherent love of crime or because they have nothing better to do or as a reaction to the societal pressures they're under. If anything, I would compare this to something like Badlands (1973), except it's not about a murder spree. It's more about a loss of innocence and an awakening. It's about a girl who becomes trapped in a fairy tale, a fantasy bubble, and then all of a sudden has that bubble burst.

It's sad. It's heartbreaking. It's creepy. It's funny. It's weird. It's enlightening. It's insightful. It's brilliantly executed in almost every way. With great guest stars like Dean Norris, Margo Martindale and Juliette Lewis, no question, this is one of the best series of the year.