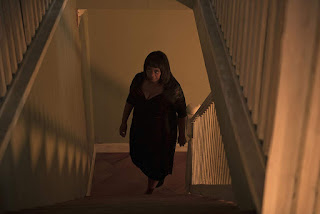 This film was released on May 31, the day before June, which is LGBT Pride Month, a time to commemorate the Stonewall riots, as well as promote LGBT rights and queer visibility. The director of this film, Tate Taylor, is an openly gay man. Despite the fact that Oscar-winner, Octavia Spencer, a black woman, is the lead of this film, her race, as pointed out by others, isn't as much of a factor here, at least not in the text of the film. Her mere presence almost demands that her race be a consideration in any analysis. Yes, there could be a racial subtext to this film, but at most it's only commented upon once in a very passing way. However, there are some gay or queer themes upon which aren't commented but are very present in both the text and subtext, if one chooses to see it or interpret it in such a manner.

Octavia Spencer (The Help and Hidden Figures) stars as Sue Ann, a nurse and secretary who works at a veterinary office somewhere in Mississippi. She works in a small town, but she lives in a rural area in a fairly nice, country home. She's either divorced or separated from her husband. She has a teenage daughter who has stopped going to school. Her daughter is seemingly ill, but it's never clear if it's cancer or if it's Munchausen Syndrome by Proxy. Sue Ann does take care of actual sick animals, like dogs with lost limbs, but she's become rather frustrated by it. She's also living an otherwise lonely life. 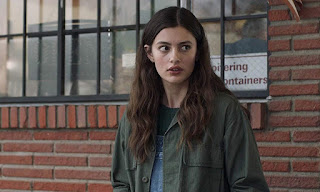 Diana Silvers (Booksmart and Glass) co-stars as Maggie Thompson, a 16-year-old girl who travels with her single mom to her mom's hometown in Mississippi. Maggie grew up somewhere else, but now she's the new girl in this town. We don't learn too much about Maggie. She seems to be your average teenage girl, trying to acclimate to her school. She sits alone in a library eating lunch when a group of kids approach and take steps to befriend her. There's no explanation as to why these kids approach her, except that one of them has romantic feelings toward her. 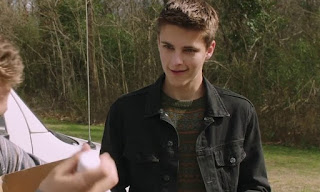 Corey Fogelmanis (Into the Dark and Girl Meets World) also co-stars as Andy Hawkins, the aforementioned kid who has romantic feelings for Maggie. He sees her briefly in the hallway on her first day and takes a liking. He then gets his other friend to approach her and invite Maggie into their group. The main thing they seem to do though is just hang out and get drunk. Oddly though, Andy is supposed to be the designated driver because he has their main source of transportation, a discarded van from his father's security company.

The only problem is that they don't have access to alcohol. They have a plan to hang out in front of a liquor store and beg some random adult to buy booze for them. Most adults dismiss the kids, but when Sue Ann sees Andy, she decides to be their supplier of alcohol. She even decides to open up her basement for Andy and his friends to hang out, drink and even party. Sue Ann seemingly is providing a safe space for these young people, not allowing them to drink-and-drive. It quickly though becomes about her reliving her youth through these makeshift parties. This alludes to another queer theme. 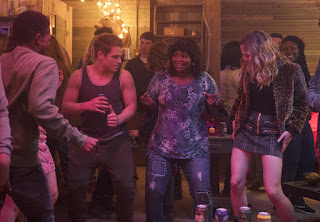 Many gay people who are Sue Ann's age and sometimes even older talk about not having been able to experience their adolescence, their time for exploration and maturation through socializing in groups or in interpersonal relationships until after graduating from school or even well into their late 20's. It's an effect of being in the closet. Coming out, even if it's past the age of 30, can have many gay people resorting to behaviors that are akin to being a teenager like partying and sexual exploration. They can be in their 30's or older but still act like 15 or 16 due to the lack of the kind of normal socialization that straight people in high school have. We saw an extreme case in Mike Mills' Beginners (2010). Sue Ann is too exhibiting similar signs of extremely late or very delayed adolescence. In his book, The Revolting Child in Horror Cinema: Youth Rebellion and Queer Spectatorship, Professor Andrew Scahill writes, "Queerness is immaturity - it is always unrealized, always unreached." As Scahill demonstrates, characters in various horror flicks have been representative of queer ideas and themes. Sue Ann might just be another character to add to his list, even if her sexual orientation on screen isn't one for the LGBT list.

Taylor's film has only one character who could be identified as being on that list. I'm not sure if Scotty Landes' script somehow explicitly expresses whether or not he's gay. I'm not sure if Taylor directed the actor to act in a way that could be deemed stereotypically gay. I'm not sure if the actor, Dominic Burgess, made that choice on his own. His mannerisms and tone could be an affect signaling to something that might not be gay or queer, but it's doubtful. 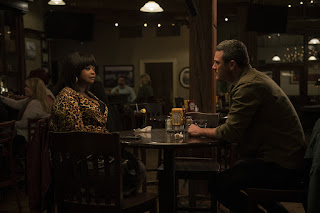 Taylor's film could also be accused of homoeroticism for the most part. Yes, Maggie and Andy do develop romantic feelings, which they express through courting and kissing. Yet, the only sexually charged moments are the ones where we're gazing, if not leering at naked men. The protagonist is arguably Sue Ann, so it could be simply the director maintaining his character's perspective, while perhaps revealing his own. The only times that there is nudity and indeed full-frontal nudity are when men are stripped of their clothing, and neither are done of the men's accord.

It doesn't go as far as something like A Nightmare on Elm Street 2: Freddy's Revenge (1985) where the male homoeroticism was so blatant, but there is homoeroticism to be found here. Despite a lesbian kiss, the homoeroticism does lean on the lust for the male body. One of those male bodies is that of Luke Evans (Beauty and the Beast and Fast & Furious 6). Evans who is openly gay and whose real-life boyfriend, Victor Turpin, has a small role here has also worked with Taylor before. Evans was in Taylor's The Girl on the Train (2016). Here, Evans plays Ben Hawkins, the father to Andy. Ben becomes the object of desire in a twisted scene that's somewhere between Lorena Bobbitt and Kathy Bates in Misery (1990). 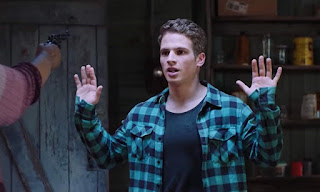 Yet, that Rob Reiner classic did a better job of building tension, suspense and terror. A murder that's ripped right from the reels of Misery is re-created here, but it's so obvious a rip-off or homage that there was no tension to it. Taylor does a M. Night Shyamalan-style cameo but can't subvert the expectation of that scene ending the same way it did in Misery. Taylor's film is less filled with terror and dread, as it's filled more with pathos. What should be scary comes across more as comical. The first death in fact garners more laughs than frights. It's gruesome but from afar. Taylor never really gets too close with his depiction of gore, not that there's much of which to speak.

Spencer is great when it comes to that pathos or those comical moments. Her outburst in a nail salon had me cracking up. Unfortunately, Taylor doesn't embrace that comedy more. For example, there is hinting here of what could be called pedophilia but it's hinted in a comedic way, but not much is done with it, until the very end when it's too late and it just comes off as bonkers. That Lorena Bobbitt moment works, but that bonkers tone at the end should have been the tone from the beginning, or else the film should have been quicker in getting there. Otherwise, it feels like it drags. Taylor perhaps wanted or was inspired by Faye Dunaway in Mommie Dearest (1981), he never unleashes Spencer though as fully as Dunaway was unleashed.