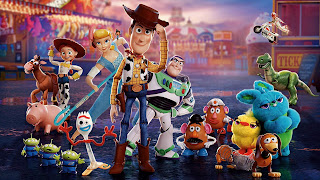 This film series is what started the Pixar company. The very first Toy Story (1995) kicked off what is now a multi-billion dollar franchise. That first film got tremendous reviews and made a ton of money. The sequel exceeded hopes and arguably did better financially and critically, which is rare for a sequel. The Pixar company then put the franchise away for over a decade. Arguably, it was a shorter amount of time than that being that it takes a few years for these movies to be made, but there literally were 11 years in between Toy Story 2 (1999) and Toy Story 3 (2010). When people thought it was impossible for Pixar to top itself, it did exactly that. It's rare for a sequel to be better than the original. It's even more rare for a third film to be even better than that. Yet, somehow Pixar did it. The company topped itself again on the third outing.

The early 2000's or the first decade of the new millennium was Pixar's prime era. It's been the golden decade for the company. Prior to Toy Story 3, pretty much every single film Pixar produced was absolute gold, including Finding Nemo (2003), The Incredibles (2004), WALL-E (2008) and Up (2009). It could do no wrong. Pixar was hitting home-runs with every single title it released and Toy Story 3 was the pinnacle. Toy Story 3 was even nominated for five Oscars at the 83rd Academy Awards, including Best Picture. It made over a billion dollars at the global box office by itself. It was also seen as a kind of ending to the series. It concluded with probably one of the best endings that has ever been committed to cinema, so the question is why this fourth installment? 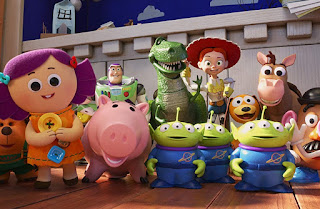 It has been noted that in the years since Toy Story 3, the company has not been doing its best work. Its films still make money for the most part. The critical consensus though hasn't been as strong. From my standpoint, the films have been somewhat entertaining, but not as powerful as they were in Pixar's golden years, which wasn't that long ago but now feels like it might as well have been back in the 1940's or 50's. The majority of Pixar's work since 2010 have been sequels and lame sequels at that. The company did produce a few originals. One of which was Inside Out (2015), which I would argue has been the only good flick from Pixar in its most recent decade.

Josh Cooley has been a writer for Pixar since 2009. He was nominated for an Oscar for co-writing Inside Out. This film is his directorial debut. He does a good job. Again, this film is entertaining. It isn't boring, but it certainly doesn't steer the company back toward its golden era. It's certainly not as good as Toy Story 3. It's a fairly fun ride, but it doesn't have the emotional heft as its predecessor. It's not a knockout on a gut level. Basically, Toy Story 3 made me cry. This film has sentimental moments for sure, but this one didn't hit me to my core the way Toy Story 3 did. Maybe it's because this film is the fourth in the series and it's difficult to keep hitting home-runs after over 25 years since this franchise started. Maybe, that's not even what Cooley was aiming to do. Maybe, he was just aiming for a single or an infield hit, but at this point, that's not what I expect, certainly not from a billion-dollar franchise by Pixar. 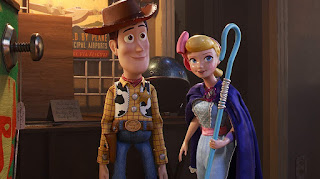 Tom Hanks (Cast Away and Forrest Gump) stars as the voice of Woody, a cowboy doll who was the favorite toy of a young child named Andy. At the end of the previous film, we saw Andy grow up and go off to college. Before doing so, he gave Woody along with his other toys to a little girl named Bonnie. Bonnie loves playing with Woody and all the other toys. When she leaves her toys alone, they come alive and have conversations. They don't see themselves as being enslaved. They enjoy being the the play-things of children. They love being these objects of affection for young people. Woody has always been particularly attached to whatever child possesses him. For three films, that child was Andy. Now, it's Bonnie and he's described as crazy loyal.

What crazy loyal means is that he'll do anything to stay with that child. In all of the previous films, and this one is no exception, something happens that separates the toy from the child. Sometimes, it's the parent of the child wanting to clean up and deciding to throw toys away. Sometimes, it can be by accident. The child can be forgetful and leave the toy somewhere. Whatever the reason, Woody always sees it as his job to find a way to get back to his child. He's like a loyal puppy dog. He also feels the same responsibility for the other toys around him. Woody isn't just a cowboy. He's a sheriff who makes sure the other toys who are his charge don't get lost. His motto is "no toy left behind." He'll always try to save a toy that a child favors. He sees it as a very important kinship or bond between child and toy, one that he will preserve at all cost. 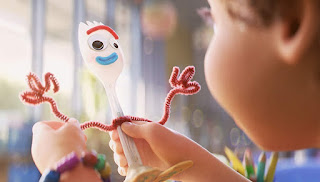 Tony Hale (Veep and Arrested Development) co-stars as the voice of Forky, a new toy that becomes the favorite toy of Bonnie. It's a new toy that Bonnie makes out of a plastic fork and some arts-and-crafts supplies. Forky becomes her favorite toy, which she insists on taking everywhere, even having him next to her when she sleeps. Unfortunately, Forky believes that he isn't a toy but a utensil that's meant for a one-time use and then is meant to be discarded in a trash can. It's difficult for him to accept the reality that he's a toy now. He started out as one thing and then transformed into something else.

This is most likely a key theme of the film. Bonnie and her parents go on a road trip. Along the way, Forky jumps from the back window of the RV that Bonnie's father has rented. Woody has to go after him and bring Forky back before Bonnie realizes he's gone. Woody and Forky get diverted inside an antiques shop called Second Chance Antique. The shop's name also echoes the key theme of this film.

For a lot of the toys in question here, they start out thinking they're one thing or have one shot at something. There is a oneness or a singularity in most of their thinking. It's a kind of myopia or else a kind of obsessive thinking or, as Bo Peep says, it's clingy. Bo Peep is voiced by Annie Potts (Designing Women and Ghostbusters). She's a toy that isn't clingy. She's learned to be independent. She's also an embodiment of the movie's key theme. She had the same singularity of thought as the other toys, but even when things don't go one's way or even when things change, people or these toys aslo have the opportunity to change and to have a "second chance."

When it comes to the end, it was somewhat predictable. I went into this film thinking that there would be no way that it could top the ending to Toy Story 3. Again, Cooley might not have even been trying to top it, but, invariably, those comparisons are going to be made. The bar has been set too high and this film doesn't come close. When it comes to the theme, relating to "second chance," there are two characters who really have to choose to take that leap into their second chance or different life direction. While it was sentimental, the emotion from those two characters making their choices didn't translate as hard as it did during the final choices with the characters of Toy Story 3.

If this is truly the end of this particular franchise, it was a nice, fitting conclusion. The animation is gorgeous and flawless. The vocal performances from the entire cast, which include new addictions to the franchise like Hale, Keegan-Michael Key and Jordan Peele, as well as Keanu Reeves, are all funny. Keanu Reeves is having a banner year. This is the third film he's had this year that was critically acclaimed and in which he's stolen every scene he's in. Reeves voices Duke Caboom, a Canadian daredevil and he's hilarious.

If this isn't the end and within ten years or so, we get the fifth installment, Toy Story 5, my hope is that the movie moves way from the conceit that the toys have to pretend to not be alive around children. Let the toys' secret lives not be secret any more!