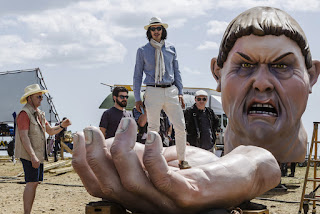 Some might not be aware but the history of this movie's production is long and complicated. Director and co-writer Terry Gilliam has been trying to make this film since 1989. Every bad thing that could happen to a film to ruin it did happen to this film. There was actually a documentary about how the film fell apart. The documentary was called Lost in La Mancha (2003). Gilliam has been one of the unluckiest filmmakers over the past 30 years. He kept trying and the movie kept falling apart, over and over. In a lot of ways, Gilliam shared some things with his titular character. His film when he first conceived it three decades ago was an adaptation of Miguel Cervantes' classic novel. It's still an adaptation of that novel with some slight modifications.

Gilliam hasn't directed a whole lot of films, given that he's been working in and out of Hollywood since the late 60's, but he was really in his height in the 80's and 90's. This film from him isn't as bold or as visionary as his work in those decades, works like Brazil (1985) or Twelve Monkeys (1995), but this film like most of his works does possess great production design and camerawork, as well as a great sense of humor that means this film, which perhaps runs too long, still is never boring or uninteresting even when dealing with a very familiar source material. 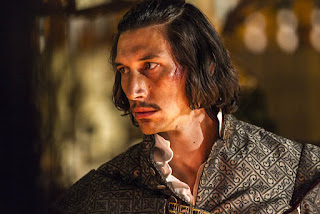 Adam Driver (BlacKkKlansman and Star Wars: The Last Jedi) stars as Toby Grisoni, an advertising director who is making a commercial in Spain for a wealthy client. The commercial is incorporating elements of Cervantes' story. It's déjà vu for Toby because he was in Spain ten years ago making a short film that also incorporated elements of Cervantes' story. In fact, Toby's short film was an adaptation of Cervantes' classic. Things fall apart when Toby gets on the wrong side of his boss and the guy financing his project. He also gets into some legal trouble, which puts him a little on the run through this rather desolate area in Spain.

It's not sure what Gilliam had intended when he first conceived this project 30 years ago, but, if one is familiar with all the ups and downs that have occurred to Gilliam in relation to this project, then what we see on screen now is a perfect metaphor or encapsulation of what Gilliam experienced in those 30 years. In some ways, this film has become autobiographical. It's not totally so. It's more like he put aspects of his experience within the framework of Cervantes' story. 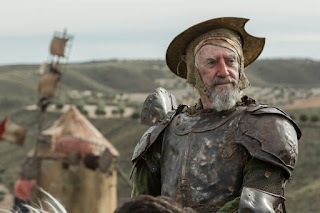 Jonathan Pryce (The Wife and Game of Thrones) co-stars as the so-called Don Quixote. He starts out as a shoe-maker or maybe a cobbler in a small town in Spain. He gets discovered ten years ago for Toby's short film. He's then aggressively pushed into playing the role of Don Quixote, so much so that he never stops being Don Quixote. His character on screen becomes his personality off screen and permanently. It's never explored, but he seems to be suffering from a mental illness from which he can't escape. When Toby returns ten years later, the shoe-maker still believes he's Don Quixote.

Much like William Friedkin's Bug (2007), this film is very much an exploration of the idea of folie à deux. This film, however, isn't as dark as Friedkin's thriller. Gilliam is making a comedy about this so-called mental illness. It could be representative of how a person's work, especially his art, can be all-consuming until he becomes the thing he creates, in this case literally. Otherwise, it's about how a man can be swept up into the fantasies or delusions of another. It can also be about how people can see what they want to see in desperate situations, as mechanisms of survival. This is obviously not a new concept, but the fanciful and funny way in which Gilliam wields it here makes it quite entertaining. 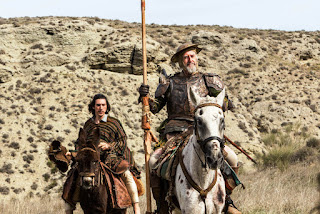 Pryce has worked with Gilliam before, so he's equipped to handle the kind of humor that Gilliam throws at him and throws him off of. Aside from Star Wars, Driver is probably best known from his role in the HBO comedy Girls, but I don't know if I've ever seen him do the kind of comedy that Gilliam has him doing here. It's a lot of physical humor. It's a lot of pratfalls. In fact, there's so much that the film could be titled, "The Man Who Fell Down." It's almost cartoon-like in the way that Gilliam wields things, but Driver handles it all with such aplomb. He's certainly a good sport, as Gilliam arguably puts him through the ringer and definitely dirties him up.

Not Rated but contains some language.
Running Time: 2 hrs. and 12 mins.