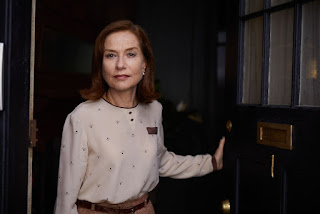 Jordan, however, wants to break all of that. He has made instead a woman stalker who is over the age of 40, who obsesses over another woman, a younger one and who isn't interested in her for erotic reasons. What Jordan presents is a warped, mother-daughter relationship. I'm sure there are plenty of women who believe their relationships with their mother is an obsessive one or stalker-like. That seems to be what Jordan is developing here, but he simply doesn't give himself enough time. The film races through its plot rather quickly. Jordan does so probably to keep things from getting boring and to maintain a feverish pace. Unfortunately, that pace runs all over the two main characters.

Isabelle Huppert (Elle and The Piano Teacher) stars as Greta Hideg, a woman who is an immigrant living in New York City by herself in a hidden-away apartment. She speaks with a French accent. It's not clear what she does for work, if anything. She might be existing off some kind of inherited wealth, yet she's not wealthy, but she dresses nice and has nice accessories like purses. When she leaves her purse on the 6-train, a young woman finds it and returns it to her. Greta then becomes obsessed with this young woman, thinking her like her daughter. When the young woman wants nothing to do with Greta, Greta becomes a crazy stalker, even going as far as physical assault.

Unlike films like Fatal Attraction and Single White Female, this film never gets into her head. She's just plot point after plot point. Jordan never gives her the space to convey the pathos that a titular character might demand. There is a reference here to Alfred Hitchcock's Psycho (1960), which is a far different film than the one here, but this film can't even get to the depths of character-study of a film made nearly 60 years ago. It's just a superficial glance at this person. She has the subtlety and grace of a soap opera villain. She'd be perfect for Days of Our Lives.

Chloë Grace Moretz (The Miseducation of Cameron Post and Neighbors 2: Sorority Rising) also stars as Frances McCullen, a waitress at an upscale restaurant in Manhattan. She's from Boston and attended Smith College, but she's now living in her best friend's loft in Tribeca. She doesn't hang out much with people her own age. This might stem from the fact that she lost her mother not that long ago. When she finds Greta's purse and befriends her, it's pointed out that she's looking for a mother-figure.

Unfortunately, Frances' need for a mother-figure is something that is stated in the film, which wouldn't be bothersome, if the film took time to develop that need in Frances on screen. Frances becomes a rather nothing character. Aside from being the object of Greta's obsession, Frances comes across as a cipher of a character. 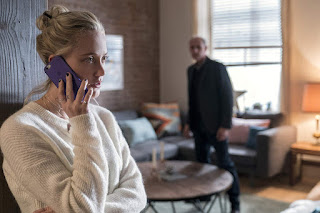 This movie was released in theaters earlier in the year before Tate Taylor's Ma (2019). Yet, Taylor's film actually does a better job of depicting the kind of psychosis and warped parent-child relationship with more tension and thrills than this one.

Rated R for some violence and disturbing images.
Running Time: 1 hr. and 38 mins.