Movie Review - All the Money in the World 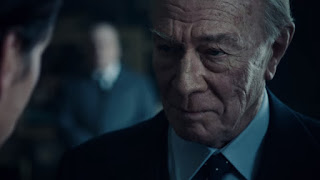 One can't talk about this film and not talk about its recent, production history. It was announced early in the year around March that Ridley Scott was going to direct this movie, written by David Scarpa, adapting John Pearson's book about John Paul Getty. Within a couple of weeks, Kevin Spacey was hired to play Getty. Filming began at the end of May. Filming was off-and-on before principal photography wrapped in August. Reportedly in that time period, Spacey only worked ten days. The film was set to premiere at AFI Fest in November. However, a month prior in October, actually a few days before Halloween, actor Anthony Rapp accused Spacey of sexual harassment when Rapp was 14, which amounted to possible child molestation.

In the wake of the Harvey Weinstein scandal, Rapp along with other victims of sexual abuse or assault felt safe revealing their truths. Based on Rapp's accusation, as well as reports of sexual misconduct in other places where Spacey worked, Spacey was fired from those other places of work. On November 8, a week and a half after the scandal against Spacey broke, the company announced it was going to replace Spacey with Christopher Plummer and reshoot all the scenes with Spacey in it. Reshoots began on November 20 and ended on the 29th. On December 11, the Golden Globe nominations were announced and this movie received three, including Best Director for Ridley Scott and Best Performance by an Actor in a Supporting Role for Christopher Plummer.

Some people were shocked by these nominations, but having seen the film, it's not that shocking. Plummer gives an amazing performance, and, given the fact that except for one moment, if I had not known that Spacey was replaced and literally swapped out only a month prior to this film's release, I never would have thought any different. I don't see the seams here. It would be one thing if Spacey had been in only a couple of scenes, but his role was significant. Based on what is seen in the final mix, his role was probably a third if not close to half the movie, and Scott has flawlessly executed reshooting all the scenes with him in it, none-the-wiser. This has to be commended.

It also has to be contrasted. This film isn't the only film to undergo last-minute reshoots uncomfortably too close to its release date. Justice League was released into theaters on November 17. It had two months of reshooting starting in July. Reportedly, Warner Bros. spent $25 million, more than double what reshoots normally cost. Unfortunately, the result was not a better film or a better-looking film for sure. Admittedly, that film had way more visual effects that probably weighed heavily, whereas Scott didn't have all the VFX to bog down his process. Still, Scott had a shorter turn-around, which was less than a month. Justice League had about three months or so to turn the ship around and it sunk, whereas Scott sailed, and again, this is to be commended. 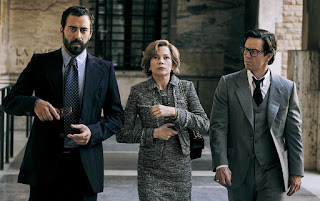 Michelle Williams, a four-time Oscar nominated actress who just had a new musical called The Greatest Showman release a week before this film's release, stars as Abigail Harris. Not much is known about her. She's a wife and mother to four children. Yet, we never really get to know all her children. We only focus on her eldest son named John Paul Getty III but he's referred to as Paul. The movie in fact focuses on the kidnapping of Paul, which took place in July 1973 and ended in December of that year.

Charlie Plummer (Boardwalk Empire and Granite Flats) co-stars as Paul Getty, a skinny, long-haired, teenage boy who's living in Rome, Italy. One night, he's walking alone on the street when a van pulls up next to him and kidnaps him. He's held hostage by a mafia group that calls Gail and demands she pay $17 million. Paul just has to sit and wait in captivity until the ransom is paid. He's scared. He's dirty. He does start to befriend one of his captors named Cinquanta, played by Romain Duris (The New Girlfriend and The Beat That My Heart Skipped).

Mark Wahlberg, the two-time Oscar nominee who just had a new comedy called Daddy's Home 2 release a month before this one, also co-stars as Fletcher Chase, a former CIA agent and business manager for Getty Oil. At the beginning, he very much is a shill for Getty, but, as the film goes along, Fletcher starts to feel for Gail and genuinely wants to help her when Getty refuses, beyond the point of absurdity.

Christopher Plummer (Beginners and The Insider) as mentioned earlier plays John Paul Getty, the head and founder of the Getty Oil company. From the 1950's to the 70's, Getty was considered to be the richest person alive, worth over $2 billion at the time of his death in 1976. He is an avid art collector, but weirdly frugal. The inciting incident in fact is not the kidnapping of his grandson, Paul. The inciting incident is that Getty refuses to pay the ransom, not one penny of it.

The movie then proceeds to be a test of wills of what it will take to persuade Getty to pay the ransom and just how stubborn he'll be about it. The conflict isn't between Gail and the kidnappers. It's between Gail and Getty. It's not obvious, despite the action revolving around the kidnapping of her eldest son, but this movie is really a stealth custody battle.

At first, Getty seems to make a good point. Getty said he has 14 grandchildren and if he paid the ransom for Paul, it would only give the mafia incentive to kidnap the other 13. It's the same logic that governments don't negotiate with terrorists. Doing so and giving in to terrorists' demands only embolden them to continue committing terrorist acts. Instead, one would want to embolden the police or the military to counteract or affect a rescue.

That's what Fletcher is supposed to do. Yet, after one attempt to find Paul, he practically gives up. We don't see him really doing much of anything to find Paul. The Italian police is also supposed to be on the job, but, aside from wiretapping the phone, we don't see the police doing anything either. Gail is concerned with raising the ransom. What she should be doing is raising money for private detectives or a paramilitary to scour the land to search for her son. Obviously, she doesn't have money for either, but it just never feels like anyone is doing enough. 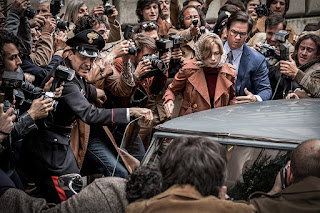 This is probably based on reality, but it makes the narrative frustrating. What was also frustrating is one idea I had. Why wouldn't Gail ask the Italian police to pay the ransom not in real cash but counterfeit cash?

Nevertheless, Gail not having any other recourse and Getty refusing to pay the ransom do paint the characters into interesting corners in order to test the film's main idea of how stubborn will Getty be and what will it take to get him to not be so incredibly stingy. The movie is a compelling thriller on that regard. By the end though, there is no reckoning of that idea. The movie suggests that Getty died around the time of Paul's rescue, but in fact died three years later. I wish there had been some kind of confrontation at the end but the ending works well enough.