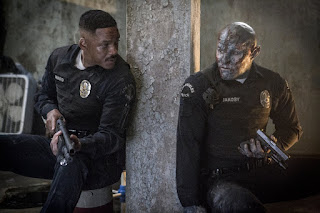 David Ayer is a filmmaker whose last film, Suicide Squad, was a hot mess and his film prior to that, Fury, was very problematic. I think this film is better than those two. Yet, it's still not ultimately a winner. What fails Ayer is the screenplay by Max Landis, which feels like a rejected episode of CW's Supernatural. The metaphor of racism and bigotry is too heavy-handed. The world-building and character development are very shoddy. It's only buoyed by the performances of its two leads. Unfortunately, the structure of the movie, which takes place all in one night, only limits the scope of things, including how much we can relate or connect to the characters.

Landis feels like he's remaking Ayer's End of Watch (2012), or maybe Ayer told Landis to remake on the page his 2012 cop drama but this time adding orcs onto the landscape, that landscape being South Central Los Angeles and Mexican gangs. Yet, orcs are a fictional, human-like goblin. They were popularized, thanks to The Lord of the Rings, the novels by J.R.R. Tolkien that were subsequently adapted into one of the biggest movie franchises in history. This movie imagines not a Middle Earth but the actual Earth where orcs and other magical beings like elves and fairies have always existed.

Not only that, this movie also wants to normalize them, so the existence of these magical beings aren't secret but well known. In that, it does deviate from something like Supernatural and the British series Being Human, which also normalize and modernize mythical or magical creatures. Those are TV shows that provide extended time to establish the world and the character dynamics. This movie only provides a very sketchy opening act. Because this movie revels in its action, it also doesn't provide much time elsewhere to delve into its characters or this alternate Earth. In fact, when it comes to alternate Earths, the CW's The Flash did a better job of establishing them and delving into its characters.

Will Smith (Men in Black and Independence Day) stars as Daryl Ward, a longtime officer with the LAPD. He's only five years from retirement, but he's worried about making it that long or doing something to ruin his pension. He's presumably good at his job, but he's apparently not well liked in his force. Why he's disliked isn't exactly explained. His reputation isn't helped when he's partnered with the LAPD's first orc officer.

Joel Edgerton (The Great Gatsby and Warrior) co-stars as Nick Jakoby, the aforementioned, first orc officer in the LAPD. Given the bigotry against orcs and the tense relationship between orcs and the police, Nick's status is one where he doesn't truly feel at home in either place. The humans don't trust him and the orcs think he's a traitor. Yet, it's not as depressing an existential crisis as one might assume. Nick merely comes across as socially awkward but pure of heart. He's rather happy-go-lucky. As such, it annoys Daryl, which is the source of a good chunk of this movie's humor.

If one is familiar with Star Trek and its various spin-offs, Nick is comparable to Spock, Worf or Seven of Nine, except Nick is more comical and this movie is probably the most comical Edgerton has ever been. The last comedy I even remember Edgerton doing was Kinky Boots (2005) in which he was great. He clearly has a talent for comedy. He should do more of them. 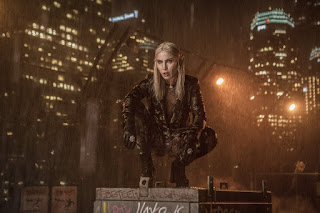 Noomi Rapace (Prometheus and The Girl With the Dragon Tattoo) also co-stars as Leilah, a psychotic elf who goes on a killing spree in search of a magical wand that can bring back an evil Dark Lord. Her role here is similar to that of Cara Delevingne in Suicide Squad (2016) but somehow lesser. What makes Leilah interesting is she's the Terminator, single-focused and with great fighting skills. She's just a formidable villain, even if her characterization is very lacking.

Speaking of which, the action scenes are better here than in Suicide Squad. They might not be all that appealing visually. There is enough frenetic movement and incoherent editing that keeps the energy up. There's also at times engaging choreography that's exciting.

In Select Theaters.
Available on Netflix.