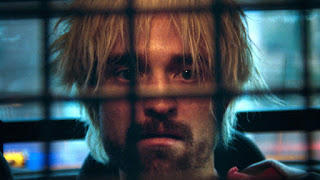 Benny Safdie and Josh Safdie are filmmaking brothers, not unlike many siblings who work together in Hollywood. This is their third feature narrative as a duo. The two are based in New York and with this film clearly take their inspiration from other NYC-based filmmakers like Martin Scorsese or Sidney Lumet. On the surface, it's just a crime adventure where we follow a person through the course of one night. It involves a bank robbery, which might draw comparisons to Lumet's Dog Day Afternoon (1975), but this is more of an adventure than that where the protagonist moves from one place to another trying to think of ways to escape and move onto the next place. The energy and pacing of it might draw comparisons to Scorsese's After Hours (1985) or even the more recent Sleepless Night (2011), but this movie is less a character study than After Hours. It's more a caricature in motion. Its action is lacking or certainly isn't as exciting as Sleepless Night, but the Safdie brothers do manage a good amount of tension from beginning to end.

The movie opens with a close-up of Benny Safdie who plays Nick Nikas, a 20-something resident of Queens, New York, who is either autistic or mentally-challenged in some way. His therapist, Peter, attempts to question him and find a program for Nick, probably due to some unnamed offense he's committed or some trouble he's got. However, Nick's brother, Constantine aka Connie, played by Robert Pattinson (Twilight and The Lost City of Z), a low-level criminal, steals Nick away from his therapist. Connie wants to protect Nick but also involve Nick in low-level crimes to get enough money to get out the city. Connie's plan is to rob a bank. Yet, the plan is so simple that Nick wasn't even needed. It's not clear why Connie felt as though he needed Nick there.

For a brief time, the movie could go the route of Rain Man (1988) or Of Mice and Men (1939), but half-way through the narrative, the whole thing takes a turn that doesn't really help to illuminate or explore the relationship between Connie and Nick. If anything the turn only helps to separate them and separate us from any insight into either of them. In fact, Nick disappears for most of the movie and we have no clue who he is. Because it becomes just about Connie running from place-to-place, there's no time taken to stop to get to know Connie as well. 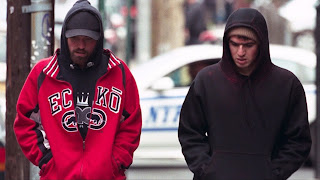 The narrative gets to a point where I wasn't even sure what was driving Connie. It seems as if Connie is trying to escape with Nick. There comes a point where that seems impossible, similarly with Dog Day Afternoon, but it's not simply that the odds are against Connie but his motivation becomes unclear and the ending becomes predictable, which would be fine, if there were a lesson learned by Connie at the end. Yet, I'm not sure what the lesson learned here is beyond what's on the surface. As clever as some criminals think they are, they'll eventually be caught and autistic or mentally-challenged people have it rough.

This movie has been nominated for several Gotham Awards and Spirit Awards. Most have pointed to the performance from Pattinson. It is a great performance but trapped inside a not so great film.