Movie Review - The Death and Life of Marsha P. Johnson 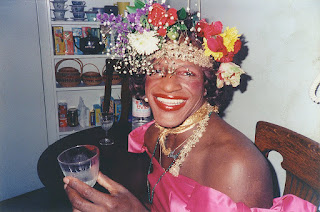 There were three major movements that kicked off the 1960's and 70's. One was the Civil Rights Movement, which pushed for African-American rights. The second was the Women's Liberation Movement or the feminism movement, which pushed for equality between both sexes. The third was the Gay Liberation Movement, which pushed for LGBT rights. In terms of things taught in high school or things in the mainstream media, everyone knows about the leaders of the Civil Rights Movement, men like Martin Luther King, Jr. and Malcolm X. There were major motion pictures made about both those men. When it comes to Women's Lib and Gay Liberation, no one really knows much or anybody. Some might have heard of Jo Freeman or Gloria Steinem who are important American feminists in Women's Lib, but who can name the important figures in the Gay Liberation Movement?

In January 2013, President Barack Obama in his inaugural address mentioned the name Stonewall. He was referring to the Stonewall riots in June 1969, what's generally know as the flash-point for the Gay Liberation Movement. It was the first time an American president has ever spoken about Stonewall or the fight for LGBT rights. Following that, filmmaker Roland Emmerich directed a somewhat big-budget film about those riots called Stonewall (2015). It wasn't the first film about the riots but it was the first to get a wide-release and enter mainstream territory.

That Emmerich film was highly criticized for whitewashing a lot of the leaders of the Gay Liberation Movement, or else side-lining the true leaders. A lot of the leaders or the LGBT people in the forefront were drag queens and transgendered people, especially a lot of drag queens and trans-people of color. Nearly 50 years since Stonewall, these leaders still aren't getting the representation or the respect they deserve. This documentary by Oscar-nominee David France (How to Survive a Plague) attempts to rectify that.

Marsha P. Johnson was one of those LGBT leaders who was there at Stonewall and who fought for LGBT rights that most in the mainstream have never heard of. This movie isn't exactly a biopic or a biography of Marsha P. Johnson who was also a character briefly in Emmerich's film, but this movie clearly gives her more attention and more regard. We don't really get her back-story. We get one brief scene with Johnson's family, but her origins are just as much a mystery here as her demise. We do learn that Johnson was born Malcolm Michaels, Jr., but Johnson was a drag queen or a transvestite who preferred the feminine pronoun.

Ten days before her death, Johnson gave an extensive interview, which was filmed and was the core of a 2012 documentary, which seems to have not gotten proper distribution. However, footage from that interview has been incorporated here.  There's also controversy that France stole footage from Reina Gossett who was struggling to make another documentary on Johnson. Yet, the only information we gather from the archival footage is what's pertinent to the investigation around Johnson's death. In fact, this movie could be considered mostly an investigation into her death, which occurred back in 1992. 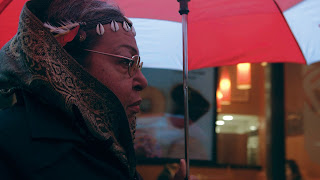 Victoria Cruz is a LGBT advocate who works for the New York City Anti-Violence Project, or AVP. She specifically handles cases of abuse or murder of trans-people. This documentary follows Cruz as she investigates the death of Johnson. Initially, the police ruled Johnson's death a suicide but no one who knew Johnson believed that, so there were protests to push for the police to change its ruling and label Johnson's death a homicide. The police wouldn't do it, so now Cruz has to do it herself.

Cruz digs up evidence that indicates Johnson's death might have been a homicide. This movie shows why the police might not have done anything more. First is the homophobia that police had for the LGBT community, homophobia that sparked the Stonewall riots in the first place. Secondly, Cruz finds that a crucial piece of evidence that indicates Johnson died due to possible homicide was never properly delivered to the police. It wasn't even delivered to Randy Wicker, the roommate of Johnson who suspected why she might have been killed at all.

Johnson's death happened 25 years ago. Cruz finds evidence that seemingly was available 25 years ago, which she or anyone else could have dug up at any time. The question then becomes where was Cruz 25 years ago? Why is it that she's launching this investigation now? It's good that she is doing it, but what took her so long? Other people at AVP talk about the overwhelming cases of trans-people being murdered. Cruz impugns those people for not doing more, but is she living in a glass house now throwing stones? 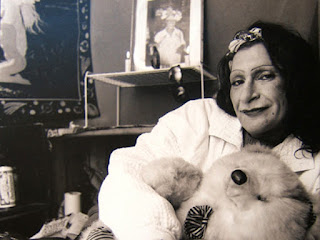 Aside from the obvious sequel this movie needs, this documentary also charts the life of Sylvia Rivera, a friend of Johnson and LGBT rights activist too. For as much time as this movie spends on her, the movie could have also been titled "The Death and Life of Sylvia Rivera." Rivera, like Johnson, was a leader of the Gay Liberation Movement as well and could be considered one of the Founding Fathers of the movement or more preferably, one of the Founding Mothers. Half of this movie's runtime is dedicated to Rivera's ups and downs from Stonewall 1969 to her death in 2002. It's a great tribute to an important, historical figure, but I don't know what it has to do with what happened to Marsha P. Johnson.