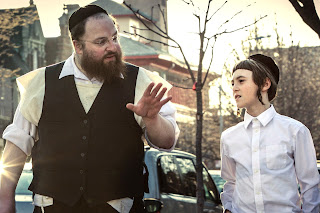 Menashe has been recognized by the National Board of Review. It got nominated for two Gotham Awards and a Spirit Award. It's mostly in the Yiddish language and features real Hasidic Jews. The movie is ultimately about Hasidic Jews. There aren't many films about the Hasidic Jewish community. The only film that is somewhat about the Hasidic community is Felix and Meira (2015), which is a film from Canada. Before that, there was the American film Holy Rollers (2010), but that movie used Hasidic characters but wasn't really about the community as a whole. Menashe is about the community as a whole and is in many ways critical of it from a male perspective.

One of Us is about the Hasidic community as a whole too and is in many ways critical but from a female perspective. On December 7, the 90th Academy Awards released its shortlist for Best Documentary Feature. Four of the fifteen titles were from Netflix. Since the 86th Academy Awards, Netflix has had at least one of its movies in this category, sometimes more than one. While there's been more buzz around Netflix's Icarus, this documentary was directed by Rachel Grady and Heidi Ewing, and both Grady and Ewing were nominated in this category for their doc Jesus Camp (2006), which also focused on a group of religious people, specifically Evangelical Christians. As strict and as hardcore as Evangelicals can be about their beliefs, they're nowhere near as strict and hardcore as the subjects here. This movie is about ultra-orthodox Jews, or Hasidic Jews who live in the tight-knit community in Brooklyn. While Grady and Ewing were way more objective in their portrayal of the Evangelicals, they are not so objective in their portrayal of the Hasidic Jews. Arguably, one could make positive or negative conclusions about the Evangelicals, as depicted by Grady and Ewing, but there is only one conclusion to make about the Hasidic Jews, and that conclusion is mostly hurtful and pain.

It's almost like Going Clear: Scientology & the Prison of Belief (2015) where the point is to deconstruct that religion and show how horrible it is. That movie is comprised of ex-Scientology members speaking about their experiences. This movie is similar to Going Clear in that regard. There's also similarities to Sons of Perdition (2010), which is about ex-Mormons. The ways in which people are excommunicated and particularly cut-off from their families are horrible and at times horrifying. Grady and Ewing capture that here through the stories of three ex-Hasidic Jews. 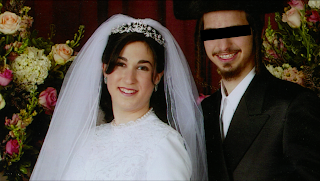 Footsteps is a support group for ex-Hasidic Jews. Initially, Grady and Ewing sit down with members and get a sense of how abused and lonely many of them feel because they don't agree with the religiosity of the community. The faith and traditions are very patriarchal and sexist, as well as designed to keep people insulated and uneducated about the world around them, or even the city around them. A lot of it is based on ignorance and fear. A few people even bring up a lasting legacy or mentality from the Holocaust, which can be understandable, if still extreme.

In Menashe, director Joshua Z. Weinstein centers on a man who isn't ex-Hasidic. He's still very much a man of the religion, but he is in a custody battle of sorts that does pit him against the faiths and traditions of his people. This movie isn't a documentary but it has a documentary-like aspect in that the movie is in Yiddish and features real Hasidic Jews.

Menashe Lustig stars as Menashe, a Hasidic Jew who is  a slightly overweight widow living in a small apartment in Borough Park, Brooklyn. He has a 11 or 12-year-old son named Rieven, but his son lives with his uncle Eizik who is Menashe's brother-in-law. When Menashe's wife died, his son went to live with Eizik who has a large and very nice home. Menashe is not allowed to raise his son unless he remarries or else he becomes super-rich so that he can fight his community in court. Because he's a poor guy who works in a convenience store, he has not much power. He's probably still heartbroken about losing his wife and feels awkward about dating again, so he's in no rush to remarry. Therefore, this movie shows the reverse sexism that exists with Hasidic Jews.

Written by Alex Lipschultz and Musa Syeed, the movie really doesn't reveal much about Menashe's family. We only see him interacting mostly with his in-laws, but his own biological relatives are amiss. Menashe's goal is to prove he can be independent and support his child by himself. He ultimately fails, which says two things. One is that a man can't be self-sufficient without the help of a woman and two is the Hasidic community doesn't make much allowances for men who want to try. 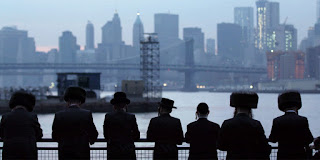 In One of Us, we see a woman trying to be self-sufficient and a single mom away from her abusive husband. We also see the community not making allowances for her either. It's a little bit more insidious for her because she is in an active custody battle where the community is pitted against her. However, in the documentary, we see others who try to break from the faith and tradition and get punished for it. One is a teenage boy. The other is a grown man in his mid-to-late 30's possibly. In one case, we see one escape the environment and start his life over. In the other case, we see one fail to escape and end up spiraling down. Both experience trauma in regards to this religion and both have to deal with it. It's emotional and heartbreaking. It also shows how fundamentalist and ignorant the society is.