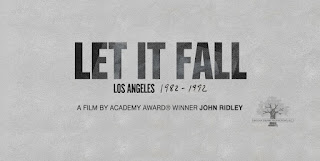 There were two other documentaries about the Los Angeles riots and a narrative feature that got a limited theatrical release. The narrative was called Gook. The two docs were LA 92, which aired on National Geographic channel, and L.A. Burning: The Riots 25 Years Later, which aired on A&E. The other two documentaries utilize and incorporate a lot of the same archival footage as was used here. The other two docs also interviewed a lot of the same people. All three therefore are pretty much the same. The difference with this movie, written and directed by Oscar-winner John Ridley (12 Years a Slave), is that this movie doesn't just focus on the riots. This movie puts the riots into a bigger context, as it attempts to chart the entire decade leading up to the riots. In that, it's very similar to O.J.: Made in America (2016), but not as long. Ridley isn't as bold as to try to encapsulate all of America. He's more focused on just the City of Angels.

Whose Streets? is a documentary that directly is about the Black Lives Matter Movement and it's been getting a lot of attention lately at several awards events. It could even get an Oscar nomination. Yet, Ridley's movie has been overlooked so far, which is a shame because while Whose Streets? is about Black Lives Matter, that movie isn't comprehensive or gives a fully realized context. It's not to say that every documentary needs to do that, but when a doc is comprehensive and contextual and does so as well as Ridley's film, it needs to be recognized.

Some might see how Ridley leads us through this movie year-by-year detailing all the pertinent events that led to the riots and think it a slog, but Ridley's editing and pacing keeps this movie moving. It's also not one-sided unlike Whose Streets?, not that being one-sided is a bad thing, but, a film or argument is always stronger when breath is given to the other side. No one, for example, can accuse this film of being anti-police because several police officers of that time are interviewed.

It's almost easier to focus only on the riots. There's a lot of great footage that captured the looting, the burned buildings and cars, as well as the physical assaults like the beating of Reginald Denny. It's more difficult to look backwards and try to be more comprehensive. The other documentaries do setup the Rodney King case, which most agree was the catalyst for the riots, but this movie goes even further and does an even deeper dive.

It might not seem like much more, but it's enough to set this documentary above the others. It also is enough to consider this movie as one of the best documentaries of 2017.