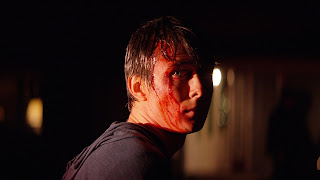 Kevin Phillips for his directorial debut decided to take us back about 20 years or so. He doesn't drop us in the middle of the 1980's, which has seen a rash of nostalgia over the past five years or so. The big clue is that a TV set shows Bill Clinton as the President. The boys in question here operate without any awareness of cell phones or the Internet. It's not clear why Phillips or his writers Ben Collins and Luke Piotrowski think the 90's are as the title suggests, or do the filmmakers simply believe the years before President Clinton are truly dark times? I'm not sure if there's any macro observations to be found here. It could all just be observations on an individual basis with nothing bigger to extrapolate. If that's the case, then I don't know why bother to set it in the past in the first place. Perhaps, Phillips was the age of these characters at this time, so he simply finds it easier to recreate his childhood. Either way, there's nothing particularly insightful or outstanding about this film being set in the 90's.

If anything, this movie reminded me of Josh Trank's Chronicle (2012), but instead of being a commentary on a particular genre, the super-hero genre via the found footage aesthetic, this movie more or less is just a straightforward dramatic thriller that could have been a moody piece, resembling a teenage The Tell-Tale Heart, or, an exercise in youthful paranoia and extreme distrust, but, instead it ends in a rather predictable display of violence that suggests nothing more inherent or meaningful. Arguably, Chronicle ends the same way, but the characterizations weren't as vague or intentionally mysterious as they are here.

Charlie Tahan (I Am Legend and Charlie St. Cloud) co-stars as Josh, another scrawny, teenage boy who's the best friend of Zach. If this were Chronicle, Josh would be Andrew, played by Dane DeHaan. There are similar vibes here as in that movie. Both are bullied and somewhat misfits. Yet, we learn a bit more about Andrew's home life that indicates why he might turn to the dark side or embrace the so-called dark times. This movie wants us to question if Josh will be a monster, which would have been interesting if the film gave us more clues as to what was happening in Josh's head.

It would have helped if the inciting incident weren't as clunky and weird as it is. The incident is staged awkwardly. It's very obvious what's going to happen and instead of being an act of misplaced or misguided retribution for bullying or whatever is at hand, the movie has it as an accident. As such, I'm not sure I buy the arc of Josh from that accident to where he goes by the end. It feels too jarring. It wasn't jarring in Chronicle and it's not simply because DeHaan might be a better actor.