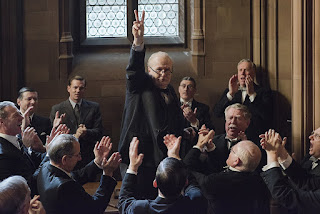 The title of this movie could have been the "darkest month" because the whole thing takes place only within the month of May 1940. It starts around the time Neville Chamberlain resigned as Prime Minister of England and it ends around the time of Operation Dynamo, which was the mission that rescued 300,000 British soldiers from France that faced certain death by the German forces of World War II. Operation Dynamo was depicted from the perspective of the soldiers in Christopher Nolan's summer blockbuster, Dunkirk. The title of Nolan's film comes from the town in France where the British soldiers were trapped. Earlier this year, there was a film that also was about Operation Dynamo called Their Finest. That title comes from a speech by Winston Churchill, the Prime Minister who succeeded Chamberlain. The crucial line from that speech in June 1940 was, "If the British Empire and its Commonwealth last for a thousand years, men will still say, This was their finest hour." Churchill talked about bracing themselves for their duties to fight the Germans and the Nazi Party that was propelling them. It might have seemed like an obvious thing looking back 75 years, but it perhaps wasn't so obvious, and, as the title of this movie suggests, "their finest hour" could have been more bleak. They could have actually surrendered to Hitler.

Gary Oldman (Tinker Tailor Soldier Spy and The Dark Knight) stars as Winston Churchill. Oldman is completely unrecognizable. The makeup on him to approximate the look of Churchill is incredible. Oldman's voice, his mannerisms and his whole physicality are all spot-on. It is without any question one of the best performances of the year. He's strong. He's grouchy. He's charming. He's off-putting. He's funny. He's dead serious. He's loving. He's aggressive. He's everything but yet always is this incredible man and incredible leader.

Directed by Joe Wright (Pride & Prejudice and Atonement), the film looks beautiful, despite most, if not all of it taking place in darkened rooms. The way Wright uses light is very splendid and very well done. In fact, his uses of light are so great that many of his frames could be shown in art galleries. It begins with the very first scene and how he chooses to show us the inside of British Parliament. It's a beam or a shaft of light that descends onto the Parliament floor. The introduction of Churchill is by way of a pitch-black room suddenly being awash from light through curtains opening to a window. The way Wright frames Churchill shows at times how he was boxed in and had his back against the wall.

Written by Anthony McCarten (The Theory of Everything), the movie takes what seems like the clear choice, to stand your ground and fight, and makes it not so clear. How it does that is by boxing Churchill further and further in, by not only putting his back against the wall but his front as well. As the days tick by, we feel the pressure mounting. We feel the lives at stake. It's all really well-rendered, political intrigue.

Given the level of that intrigue, the movie draws the most comparisons from the Oscar-winning The King's Speech (2010). It helps that both films feature King George VI as a character. In the 2010 film, George VI was played by Oscar-winner Colin Firth. Here, George VI is played by Emmy-winner Ben Mendelsohn (Rogue One: A Star Wars Story and Starred Up). The 2010 film was set before WWII. This film occurs during. The 2010 film was about the friendship George VI had with his speech therapist. This film features the potential friendship between George VI and Churchill. The 2010 film culminated in a speech from George VI. This movie ultimately culminates in a speech from Churchill. 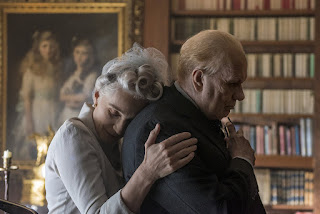 It's moments between Churchill and various people that the movie handles so well. Churchill's limited interactions with King George are just one example. Whether he's reporting to the king or he's cozy next to his wife, played by Kristin Scott Thomas (Gosford Park and The English Patient), or he's facing off with Lord Halifax, played by Stephen Dillane (Games of Thrones and John Adams), the man who wants to surrender to Hitler, each moment is entertaining, powerful and so well-acted. One would think it boring because it's just men in rooms talking but the script and performances are so engaging.

Lily James (Baby Driver and Cinderella) also co-stars as Elizabeth Layton, the secretary to Churchill. She takes his dictation, helps him craft his speeches and generally organizes all his paperwork. At first, she just seems like a comedic sidekick that is the audience surrogate into this whole environment, but she also provides a humanizing aspect to the soldiers' lives that hang in the balance.

In select theaters.
In Rehoboth Beach on Dec. 22.