The first BearCity (2010) was described as Sex and the City but with big, hairy, gay men. "Bear" is the term for gay men who are hirsute and have considerable weight or girth. The first movie focused on their dating lives. The sequel was BearCity 2: The Proposal (2012) and it focused on the idea of marriage within this group. It continued the issues and themes from the first like body image and self-esteem, but that second movie ended in a way that felt final. Yet, writer-director Doug Langway had one more aspect to explore. This movie essentially delves into parenthood and gay men becoming or being fathers. Since the first movie and even before, there have been various properties dealing with the type of gay men here. One of the most successful has been Where the Bears Are, a web series that has probably been more fruitful than Langway's work, but after five years, Where the Bears Are hasn't gone near the idea of its gay men as fathers. Langway, however, does wade into fatherhood while still trying to maintain a prurient interest in it all.

In the first movie, the characters remained in New York City but the movie showed how bears hooked up in places like the Ramrod, a bar that no longer exists, and had sex in sometimes polyamorous ways. For example, the first movie featured two shower scenes with at least three men engaged in oral sex or intercourse. The second movie took the main action out of Manhattan and journeyed to Provincetown, Massachusetts, aka P'town. Every summer, P'town hosts what's called "Bear Week," a series of events, specifically for gay men who are the predominant population in that part of Cape Cod. The second movie captures some of those events and traditions, including the "Dick Dock," a spot underneath a beach pier where much prurience occurs.

This third movie references P'town but instead anchors itself at The Woods Campground, a membership-only, LGBT, clothing optional, camping resort in Lehighton, Pennsylvania, within the Poconos. It mainly caters to gay men, particularly bears who want to bring their RV's or tents and enjoy the nature, the trees, the lake and the ruggedness. It's also one big cruising spot where a lot of fornication happens out in the open with no judgment but with a lot of support, including free condoms.

Brian Keane (Lights Out and Law & Order) stars as Fred Richards, a NYC filmmaker who is currently working on a documentary about bears in the gay community. He's married to Brent Dean, played by Stephen Guarino (I'm Dying Up Here and The Big Gay Sketch Show). Brent is a producer on Fred's movie, but he's more concerned with the fact that they're having a baby through surrogacy with Fred's lesbian sister, Susie, played by Rachael Drummond. However, Fred isn't as concerned as Brent, which causes a bit of friction between the two.

Gregory Gunter (Law & Order: Special Victims Unit and Difficult People) co-stars as Michael, a Broadway producer who is the most overweight of all the guys here. He is a self-proclaimed fat guy but proud of it. He struggled with self-esteem in the first movie but was able to overcome it, thanks in part to the love and strength from his boyfriend. Unfortunately, that boyfriend, Carlos, played by James Martinez, wasn't available this time around having been cast in House of Cards, Major Crimes, One Day at a Time and various other TV shows, so Langway killed off his character. It opened Michael to have a new, African-American boyfriend, Dalton, played by Garikayi Mutambirwa (Jeepers Creepers II and NCIS). It also opened Michael to deal with fatherhood from a different perspective, as well as grief over losing a loved one.

Gerald McCullouch (CSI and Daddy) reprises his role as Roger Beam, a former stockbroker who's in a bit of financial trouble. He's actually unemployed and needs a new job. The boyfriend he had in the previous movie is gone for some arbitrary reason. He now wants to go back to his love interest from the first movie for no discernible motivation than just because. 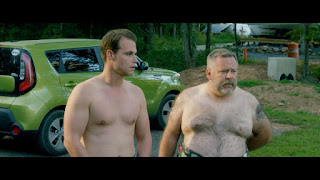 Joe Conti rounds out the main cast as Tyler Hall, the young bear-chaser. He's not big and hairy but he prefers guys who are. He was the love interest for Roger in the first movie. They broke up in the second movie under the implication that Roger wasn't fat enough for Tyler and Tyler wasn't muscular enough for Roger. It's a bit odd that for a series of movies about loving men regardless of their body sizes, the reason these two break up is over body sizes. Tyler is dating a closeted firefighter, Jay, played by Tim Hooper (Where the Bears Are), who is lovely and adorable with his Texas accent but whose story about homophobia among firefighters isn't developed as much as it could have been.

Langway does jazz up this final installment with way more stunts, including sequences aboard golf carts and ATV's, collapsing campers and a scene with an actual bear. He also tries a glow party, a scene illuminated by all blacklight it seems, which attempts to top his foam and bubble-bath party from the previous movie. It's visually interesting. There isn't much focus on the eye-candy as in the previous movies, but there is eye-candy in the form of a couple of actors like Matthew Montelongo who plays Max, the editor to Fred's movie, and Jay Arseno as Kyle, the singer who catches Roger's fancy.

Not Rated but contains language, sexuality and nudity.
Running Time: 1 hr. and 56 mins.