Movie Review - Call Me By Your Name 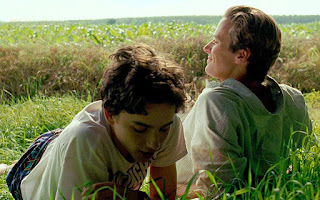 I'm not sure I understand the title. This film is an adaptation, a very faithful adaptation of the 2007 novel by André Aciman. In it, two young males decide to have sex. They get into bed and get undressed, but right before they follow through, one of them says, "Call me by your name and I'll call you by mine." The book explains how it makes the protagonist feel and how it becomes a game between the two, but not where it came from or why he thought of it. Written by James Ivory (A Room with a View and Maurice), this film doesn't really explain it either. It's just something that's tossed from out of nowhere.

Timothée Chalamet (Lady Bird and Miss Stevens) stars as Elio Perlman, a 17-year-old boy who lives with his parents in their villa in northern Italy. It's 1983 and Elio has a talent for music. He plays several instruments. He's also very familiar with various classical composers. He's very well read with his head constantly in books or else he's frequently writing. It's summer time, which affords him a lot of free time to sunbathe, ride his bike or go swimming.

Armie Hammer (The Social Network and The Lone Ranger) co-stars as Oliver, a 24-year-old graduate student who comes to stay at Elio's house for six weeks. Elio's father is a professor and has Oliver as an intern. Oliver assists Elio's father in research for a book on archeology. Yet, Oliver is also afforded a lot of free time to go biking, swimming and playing volleyball. 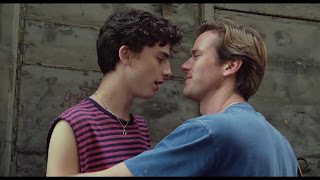 Directed by Luca Guadagnino (A Bigger Splash and I Am Love), the movie charts the brief romance between Elio and Oliver. While Guadagnino seems to focus on sensuality, a tendency that would usually try to pull the movie-goer closer to the screen and the things in it to have us feel and experience those things as best as possible, there is a weird distance to this film.

For a lot of this film, Guadagnino's camera is at a considerable distance from his subjects. Guadagnino frequently frames them in wide-shots or medium shots. There are little to no close-ups. Aciman takes two pages, single-spaced, to describe Elio and Oliver's first kiss at what's called "Monet's berm" and it's a pretty big deal, but Guadagnino apparently didn't think it warranted a close-up. Aciman is very precise to note what each person's lips do, down to what their tongues do, but Guadagnino doesn't give close-ups of those lips or tongues.

The only significant close-up is a shot of Oliver's chest hair, a tiny section that can be seen due to his slightly unbuttoned shirt. Yet, it's a quick shot, barely a second before Guadagnino cuts away. There are no other close-up shots like that again, shots that truly convey the lust and desire for specific body parts. There's a tight shot of Oliver's face as he wistfully looks into the sky, but that's about it. For a movie about sexuality, the act of skin-to-skin contact, Guadagnino avoids focusing on any skin here, despite the two boys running around shirtless for a large part. There's even a scene where Oliver gives Elio a foot massage and it's all done in medium, not even a close-up of fingers or toes, an opportunity Quentin Tarantino wouldn't have let pass. 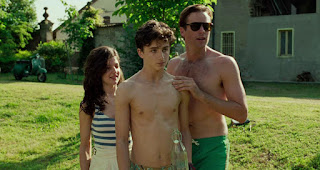 The apex is a scene that seems ripped from American Pie (1999). Except, instead of a pie, the object of prurience is a peach or possibly an apricot. We never get a close-up during or even after the incident. American Pie gave us a close-up of the pie post-coitus. The pie in fact filled the frame in the wake of what was done to it. We don't get that here. Guadagnino doesn't seem to have the courage to give us a close-up of the peach post-coitus.

There is a tight shot of Elio's face at the end. It's an emotional moment that I'm not sure the movie earns. Chalamet's performance and the music from Sufjan Stevens help to sell the moment, but there simply isn't enough here to make me care or to move me. Elio is living in the lap of luxury where his parents have a maid who tends to Elio's clothing and makes him food. He is wealthy and privileged and having this romance with Oliver. As the movie progresses, there is no real drama or conflict at all, not even between Elio and Oliver. Yes, Oliver's six-week stay eventually ends, but, in the grand scheme, it's a drop in the bucket and not worth the tears this movie makes Chalamet shed.

Guadagnino's previous film A Bigger Splash was all about people living in the lap of luxury, but that movie succeeded where this one fails by providing conflict and real drama for its characters. The scenery here is beautiful and Armie Hammer is certainly eye-candy, even from afar, but without conflict or real drama, things get rather boring, which is what I was. I was bored by this.

In select theaters, including DC, Baltimore and Philadelphia.
In Rehoboth Beach, DE on January 19.