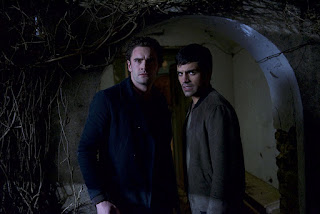 Joe Ahearne's film is about a British legal case involving discrimination against a gay couple. As an American, I'm not too familiar with how LGBT rights have been adjudicated in the United Kingdom, but it seems as though LGBT rights in the United States have been more the result of adjudication than through the passage of Congressional or political acts. For example, the legalization of gay marriage in the UK was the result of Parliament passing the Marriage (Same Sex Couples) Act of 2013, whereas in the USA, the legalization of gay marriage had to be decided by the Supreme Court with Obergefell v. Hodges in 2015. Looking back at history, most if not all the American advances in LGBT rights have been decided through the Supreme Court, starting in 1958 for the ruling of ONE, Inc. v. Olesen.

Sixty years later, LGBT rights in the USA are still being decided by the Supreme Court, which just a few weeks ago heard arguments in what might be another landmark advancement, that of Masterpiece Cakeshop v. Colorado Civil Rights Commission. That case involves Jack Phillips, a cake baker in Denver who refused to make a wedding cake for a gay couple, Charlie Craig and David Mullins. Similar cases have popped up in Oregon and Northern Ireland, which makes Masterpiece v. Colorado an important case that might decide how far a business can discriminate against gay people or anyone.

Masterpiece v. Colorado is worth mentioning because the spirit of it is what forms the basis of Ahearne's film here. Instead of a cake shop, it's a bed-and-breakfast, aka B&B. The gay couple in this film isn't accommodated as heterosexual couples are. They were refused accommodation, so they sued the B&B and won. Instead of a monetary settlement, the gay couple comes back a year later to stay at the B&B, even with the homophobic proprietor still there. When the two arrive, there's obvious tension and as the night goes on, those tensions increase, eventually erupting into a violent act. Ahearne's script then becomes about the twists and turns from that violent act, as well as the gay couple trying to survive the night.

It's great because it's not often that a thriller or genre film features a gay couple as the leads. It's fun on that level. Other critics have compared it to Hitchcock. Hitchcock has had queer protagonists in his films, but he could never openly admit it. 70 years after Hitchcock's Rope (1948), Ahearne can openly admit it. He also doesn't have to conform to conventions or expectations. As such, there are a lot of surprises to be found here. 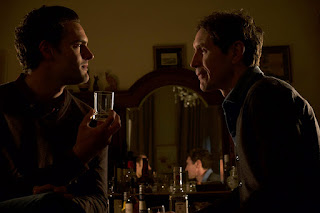 Tom Bateman (Da Vinci's Demons and Jekyll & Hyde) stars as Marc Leeman. Sean Teale (The Gifted and Reign) also stars as Fred Price. They're the Charlie Craig and David Mullins of this situation. Marc is the more aggressive and strident one. He's also described as a sore winner who wants to gloat about his legal victory to the B&B owner. Fred is less antagonistic and the more passive one. He's also more compassionate and more sympathetic. Yet, he loves his husband and goes along with returning to the B&B to confront the bigotry and not cower in fear, despite that being a tendency of his.

Paul McGann (Doctor Who and Alien 3) co-stars as Josh, the aforementioned owner of the B&B who is a hardcore Christian. He's the Jack Phillips of this situation. Josh isn't necessarily evil or malicious, but his bigotry is worn on his sleeves. He doesn't seem all that humble or meek. He does have an air of snobbery and arrogance to him. He's also a bit prissy, along with his stiff upper lip.

Callum Woodhouse (The Durrelle in Corfu) plays Paul, the son of the B&B owner. He also works at the B&B as an attendant and housekeeper. He worries that the couple returning will bring trouble to the B&B. He doesn't dislike the couple. He actually agrees with them and not his homophobic father, but he feels that their presence will make things more uncomfortable and possibly dangerous for him.

James Tratas is an up-and-coming Lithuanian actor who plays Alexei Petrovich, a mysterious Russian guest. He's tall, handsome and very buff. He's sexy but he's also a tad scary. He's presumed to be the homophobic person who will inflict violence. Fred is afraid that Alexei is there to try to lure them in and then bash them somehow. Anxiety builds over who Alexei is and what he is planning to do. 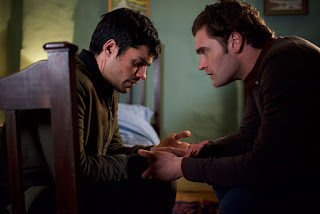 What ends up happening is that Alexei does turn out to be a threat but just not in the way one might think. At the same time, Josh might not be the bad guy that one might assume in the beginning. Also, Marc and Fred might not be the good guys that one wants. Ahearne brilliantly blurs the lines for all the characters and cleverly pull sympathies for each character back-and-forth.

Not Rated but contains language, violence and some nudity.
Running Time: 1 hr. and 26 mins.