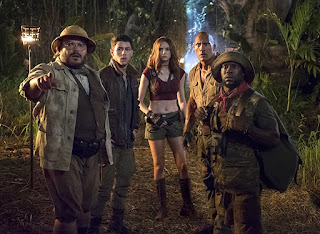 It doesn't begin nor end with him, but Dwayne Johnson aka "The Rock" is very much the star of this action-comedy. It consists of an ensemble of five but the main focus goes to Johnson and Kevin Hart who worked together previously in Central Intelligence (2016), an action-comedy that really made great use of their talents both individually and collectively. This movie, directed by Jake Kasdan (New Girl and Fresh Off the Boat), attempts to recreate the magic between Johnson and Hart in that 2016 film. He succeeds and captures that magic a little, but the 2016 film gave Johnson a bit more of a character to play than in this one. His character at least isn't as bold or over-the-top as his 2016 character. Here, Johnson is supposed to be mild and meek, so he doesn't standout as much as he did in previous movies. Johnson is a fairly good actor. He mostly coasts on his charisma, but, it's simply difficult to buy him as an anxious and scared, teenage kid.

Alex Wolff (My Friend Dahmer and Patriots Day) plays Spencer Gilpin, a skinny and awkward, high school student who starts to work an old video game that magically pulls him into it. It's similar to Tron (1982) or Tron: Legacy (2010). The difference is that this movie doesn't indicate visually that Spencer or any of the other students pulled into the game are actually in a video game. Yes, video-game technology has progressed tremendously since the 1990's where this movie starts, but nothing that totally eliminates the uncanny valley. This video game here pulls Spencer into a world that has no uncanny valley, yet the video-game console looks like an old 16-bit console. Once Spencer is pulled into it, he becomes Smolder Bravestone, played by Dwayne Johnson.

This film is a sequel to the 1995 film Jumanji, starring Robin Williams. The 1995 film didn't have a magical, video game. It had a magical, board game. For this film, that board game is transformed into a video game, presumably to appeal to young people today. Co-written by Jake Kasdan and Chris McKenna (American Dad and Community), as well as several others, the film possibly reaches back a little too far. Instead of a third-generation, game console, it should have been a fifth or sixth-generation console like a Sony PlayStation or something similar. 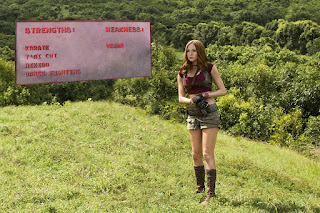 In the film, we see the board game literally transform into a video-game console. Because video games are computer systems that get updated or improved every few years, if not once every decade, the question then becomes if the magical, video game must also update itself every few years too. Except, that's not the case here. The video-game console's exterior remains the same over the course of the 20 years depicted in this movie.

There is a little bit of a disconnect between this film and the previous. In the 1995 film, Williams' character of Alan Parrish gets pulled into the game, as just a random consequence. The real purpose of the game was to bring jungle experiences out into the real world, or at least the quiet, suburban world of Brantford, New Hampshire. The board game was a bridge between the players and the jungle. The video game here is also a bridge, but whereas being pulled into the jungle was a consequence before, it seems to be the game's sole purpose now.

Given that the basis here is a video game, it makes sense that the sole purpose has changed. Otherwise, this movie might have become something like Pixels (2015), although the filmmakers could have come up with something less akin to Michael Bay. It could have produced something akin to a live-action Wreck-It Ralph (2012) and what it would be like to interact with living video-game characters.

Actually, this movie might be more akin to James Cameron's Avatar (2009). In that blockbuster, people get pulled into a jungle experience and inhabit other people's bodies, just like in this movie. Cameron's jungle was a unique planet where aliens frolicked. Kasdan's jungle is just a jungle, one that is reminiscent of the Hawaiian environment where the film was made. With the exception of a bazaar that invokes more Persian culture, Kasdan's jungle isn't particularly interesting. There's an Indiana Jones vibe to it briefly but not much more than that. 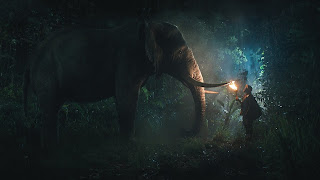 The major detail is that it's riffing on video-game ideas or mainly terminology. It doesn't spoof those video-game ideas with any specific take. It does the thing that most or a lot of comedies do, which is thinking that calling out something is enough. Name-checking things can be funny, but often, there should be more. The movie calls out the video-game idea of cut-scenes, which are references to the blurring of movie and video games within the medium. Yet, this film doesn't do anything with it or it doesn't have a comedic take on cut-scenes. Kasdan just name-checks it. A better film about teens pulled into a fantasy world that has a strong, comedic take and spoofs something effectively is Pleasantville (1998).

This film also tries to do something with the video-game idea of having multiple lives. It's only clever about that at the end. Other than that, the movie plays with teenage stereotypes. Johnson doesn't really nail the stereotype given to him. Hart is just Kevin Hart, not really giving a performance, just doing his usual standup shtick.

Karen Gillan (Guardians of the Galaxy and Doctor Who) co-stars as Ruby Roundhouse, the video-game avatar for Martha Kaply, a shy bookworm who hates athletics. Gillan is okay in the role as a girl who has to learn to be less judgemental and embrace her inner bad-ass.

Jack Black (Kung Fu Panda and The School of Rock) also co-stars as Sheldon Oberon, the video-game avatar for Bethany Walker, a vapid and vain cheerleader who only cares about her cell phone and social media than she does about people. Black's performance is the standout here. One can argue that he's riffing on his character in Bernie (2011). He's a middle-age man who is playing a very effeminate and sassy, teenage girl. It's a tightrope he walks between convincing and mocking caricature. 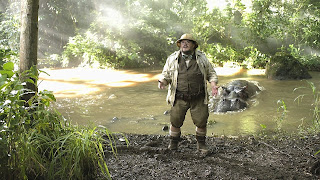 What helps to sell Black's performance is a quasi-romance between his character and another male character. Sheldon along with the other teens pulled into the jungle meet Seaplane McDonough, played by Nick Jonas. Jones is a pop star-turned-actor who has teen-idol good looks and having him be the object of this middle-age man's affections worked. I wish the movie had gone further with that affection, but it works. Unfortunately, this movie doesn't work in selling the danger of this situation, which Robin Williams sold in his performance.