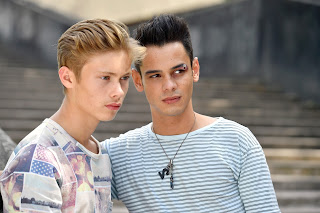 Directed by Didier Bivel and written by Jérôme Larcher, this movie was originally broadcast on French television, FR2, on May 17th, which is International Day Against Homophobia, or what's known as IDAHO. The May 17 events are meant to raise awareness of LGBT rights violations. A Frenchman named Louis-Georges Tin is the founder of IDAHO, and in France, same-sex marriage was legalized on IDAHO 2013. This movie was made in that spirit. A character here even acknowledges the 2013 law but that this law didn't end homophobia in France. Arguably, France is one of the most gay-friendly countries in the world, other than Spain and Germany, but there are still issues of homophobia that people have to handle or deal with.

Breaking Glass Pictures is bringing this movie to the United States. It's in a continuum of several movies about young boys and their same-sex attractions, as well as the homophobia either internal or external, which keeps them apart. When it comes to gay films, there have rarely been many stories about people who have been so young as in Esteros (2016) from Argentina and Heartstone (Hjartasteinn) from Iceland. This movie is more about teenagers and not the prepubescence of those aforementioned titles. It's also more about a father's reaction to his son's same-sex attraction and how he handles or deals with it. 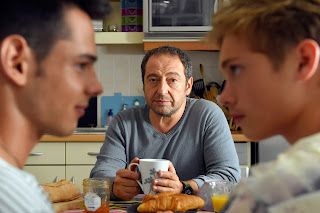 Patrick Timsit stars as Stéphane, the chief of police in a town or small city in France. He's a single father raising his one and only child, a teenage boy. They seem to have a good relationship. They go jogging together. Everything seems fine until a shocking photo of his son appears online and shared on social media. Stéphane sees that the picture is of his son kissing another boy. This photo goes viral and becomes the talk of the town. At least, that's what it feels like to Stéphane because when he goes to work, he hears some gossiping about it and people looking at him oddly.

Bérenger Anceaux stars as Nathan, the son of Stéphane, a tall, adorably sweet brunette who's 16 or so. The picture shows him kissing a boy but because it's at night, no one can tell who he's kissing. Classmates tease and pick on him to reveal who he was kissing, but Nathan keeps the secret. The teasing becomes relentless and more intense, turning to bullying. Nathan endures or tries to avoid it, even having to run at one point. 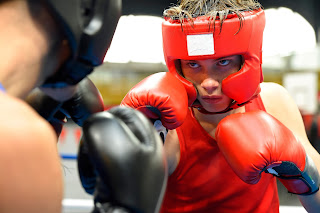 Jules Houplain co-stars as Louis, the son of Bruno, a doctor and rheumatologist. Louis is the equally adorable blonde that Nathan kissed. However, Louis has a girlfriend and he has a very macho father who is training him in a boxing gym. In fact, he joins in locker room homophobia and even aggression to exert hetero-normative dominance, perhaps to conform to what his father expects. He represents a young person in the closet and how toxic that can be, not only to those around him but also to himself, all the way to the point of possible suicide.

Nicolas Carpentier plays Tristan, the teacher of Nathan and Louis' class. He's reprimanded for defending Nathan from bullying and trying to speak against homophobia. This shows that just because a law like same-sex marriage is passed doesn't mean that equality or tolerance will magically trickle into various institutions like school. Catherine Jacob who plays Catherine, a 50-year-old teacher and closeted lesbian echoes this sentiment, which is why she is still closeted and at times no better than Louis. 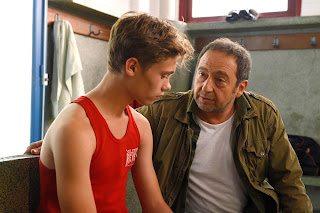 At the end of the day, the movie is about Stéphane and how fathers choose to love and accept their sons. There are two reactions that the film points out. One father chooses to embrace and pull his son closer. The other father chooses to distance himself, to push his son away or in fact drive away. Bivel's movie makes obvious which choice is the better one.

Not Rated but deemed "tous publics" in France or "suitable for all audiences"
Running Time: 1 hr. and 27 mins.

Available on DVD on December 5th.