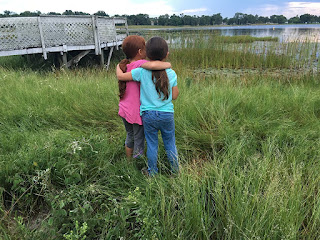 This movie focuses on a young, single mother named Halley and her little daughter Moonee who are extremely poor. They're virtually homeless. What separates them from the streets is a cheap motel called the "Magic Castle," which is painted purple and lies not too far from Walt Disney World just outside Orlando, Florida. Directed and co-written by Sean Baker, the film follows mostly the little daughter, as she runs around this motel and the neighboring motels and businesses during the summer. She's a rowdy, little girl, not afraid to curse and cause trouble, doing whatever she wants, traits that she gets from her tattooed mother. The little girl is unaware for the most part, but the movie shows how her mother struggles to pay the motel bill or even get them food.

The movie also shows us other people in the motel who struggle as well, but those other people don't seem as dire. At least, one of the mother's friends named Ashley has a job. She's a waitress at a lowly diner. It's not the best in the world, but she's not forced into prostitution, which Halley is. Halley also panhandles on the streets or near tourist destinations like fancier hotels. She mostly scams people or steals, finding ways to get stuff for free.

Baker does a good job of showing all of this, but he doesn't do a great job of explaining it. Both Halley and her daughter Moonee are pretty insufferable, even after a while, which is fine as characters in a film. I don't have to like them, but I do have to understand them, which Baker fails to do.

I never understood where Halley came from, what got her into this present situation and why she's doing what she's doing. There's not much context in that regard. Without much context, I'm not sure what's to be learned or what the takeaway is, besides being within a stone's throw of the beautiful luxury that is Walt Disney World, there exists such poverty.

Earlier this year, Netflix released the movie Imperial Dreams, which is also about an impoverished, single parent, except instead of it being a mother and daughter, it was a father and son, and both were black. There aren't many films about single fathers who are black. There have been plenty of films about white single mothers. Most are romantic comedies or even romantic dramas that often don't deal with this level of poverty and usually not through the lens of a child, particularly a little girl. Baker's film has to be given credit for that.

In terms of cinematic expression, Beasts of the Southern Wild (2012) triumphs over this one in depicting a little girl in an impoverished situation. It might not have the verisimilitude of this film, but, in those terms, I prefer The Inevitable Defeat of Mister and Pete (2013), which tells the story of an impoverished woman through the lens of her son. That movie provides more context, context that helps to understand the underlying issues.

Willem Dafoe (Platoon and Shadow of the Vampire) stars as Bobby, the motel manager of the Magic Castle. He is perhaps the best thing about this film. He's mainly trying to maintain order in all the chaos that's thrown at him, almost on a daily basis. Some motel managers just sit on their butt all day, but Bobby goes a little bit above the call of duty. When a creepy man starts lurking around the children, Bobby could do nothing or the bare minimum, which would be calling a parent. Yet, he steps up himself. Obviously, there is a line that he can't cross and he doesn't, but he's more engaged than one might expect. The reason might be due to personal reasons of which the movie hints. Those personal issues probably include his son, Jack, played by Caleb Landry Jones (American Made and Get Out).

Brooklynn Prince also stars as Moonee, the 5 or 6-year-old girl at the center of all this. She's basically a little girl being a little girl. Time will tell, if she ever is in another movie, how good an actress she is. I was certainly not impressed with her performance as I was with some of the incredible, child performances from last year like Alex R. Hibbert from Moonlight, Sunny Pawar from Lion, Royalty Hightower in The Fits, Michael Barbieri in Little Men, Lulu Wilson in Ouija: Origin of Evil and Jahking Guillory in Kicks.

What killed it was the last few minutes of the film. Prince is forced to cry. I say, "forced," because it looked forced. The camera is shoved in her face and she has to give this big explosion of tears, and I simply didn't buy it or it felt for the first time in the whole film like Baker directing something that probably didn't come naturally or easily.

The very last shot took me out of the film, and not simply because unlike the rest of the movie, which was shot on 35mm film, the very last shot was shot on an iPhone, much like Baker's previous movie Tangerine (2015). Tonally, the very last shot feels out of place. It feels like the character literally escaping into a fantasy land. It felt more like a scene pulled from Escape From Tomorrow (2013), not appropriate for this movie.