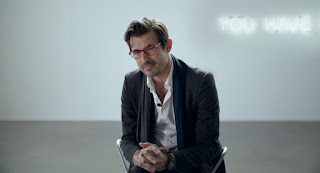 The official submission from Sweden to the 90th Academy Awards is also the Palme d'Or winner at the 70th Cannes Film Festival. It was written and directed by Ruben Östlund whose previous film Force Majeure won him a lot of acclaim. Many even believed he should have gotten an Oscar nomination for his work. His snub a couple of years ago will most likely be rectified with this film, which is how it usually works with the Academy, despite the fact that this film is not as strong as Force Majeure.

Claes Bang stars as Christian Juel Nielsen, the chief curator at an art museum in Stockholm. He's probably divorced but has shared custody of his two daughters, both are most likely within the age of 8 to 12. He's first seen asleep on the couch in his office. He's a little unkempt but still very well-dressed. He's probably tired from countless press about the museum and upcoming exhibits, or just random hook-ups. As the interview in the beginning of the film reveals, he's not really that engaged or passionate about the museum, or else he's just tired and not at his best, though it could be the former and he skates by because he's tall and very handsome.

Things start to go downhill for him one day on the street while he's walking to work. His wallet and his phone are stolen. His attempt to get it back triggers a series of events that ultimately result in him losing his job and potentially putting his life and the life of a child in danger. Nevertheless, this movie is a comedy. The tone and style are similar to Force Majeure, which was more a drama. Yet, it's clear that Östlund doesn't want us to take the things here as seriously, which unfortunately lessens the film's impact.

The target of Östlund's comedy seems to be those involved or engaged with the modern art world. His target isn't at modern-day painters or sculpters, per se. Östlund's aim is at those who do installation art, or three-dimensional works that are site-specific. Art installations can include sculptures like statues, but, over the decades, some bizarre or head-scratching installations have popped up. Attached to this is comedy also thrown at those who do performance art. Some bizarre things like Marina Abramovic have been ripe for mocking and Östlund ostensibly does so here. 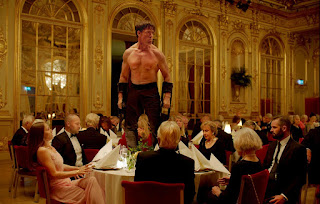 The centerpiece, which is featured on this movie's poster and in all the press material, is a comedic take on a performance art show. Abramovic did a strange show in 2010 at the Museum of Modern Art in New York City where she sat still for a month or so. Here, Östlund has a man, not sit still but stand and behave like a gorilla or some kind of wild ape for a group of people at tables in a huge ballroom hosting a black-tie dinner.

Terry Notary co-stars as Oleg, the performance artist who is the aforementioned, shirtless man who behaves like a gorilla or some kind of wild ape. The fact that Notary is the person in this role is itself an inside joke. If you've never heard of Notary, he's become a well-known actor in the motion-capture industry. He started as a stuntman in the early 2000's. His big break was in the film Avatar (2009). What got him this job though is Notary's work in the trilogy started with Rise of the Planet of the Apes (2011). After which, he began coaching people on how to perform as primates in those movies. There's even a YouTube video of Notary demonstrating doing this. Östlund basically took that YouTube video and extended it here where Notary doesn't break character.

The annoyance and potential danger of what Oleg is doing are realized. Yet, the scene seems emblematic of a theme that runs through the entire film, which is the length of time it takes someone to do something when they see or hear someone screaming for help. As one can probably guess, Oleg's performance art turns violent and he starts attacking people, including a woman who screams for help. She's in a room filled with people. All of whom sit and watch her scream for help for what feels like an eternity before anyone even thinks about doing anything.

Throughout the movie, we see this happen over-and-over. Christian is the person who is at the center, so typically he's the one who hears someone scream for help and it's typically him who hesitates to do anything. This also goes to another strong, connected theme, that of trust. One of the art installations at Christian's museum explicitly asks people what kind of person are you. This could be what the film is also asking the audience. The trajectory of Christian could be one that vacillates or swings back-and-forth between trust and mistrust of strangers he encounters.

The arc of the movie bends from a mistake or an extreme act that Christian commits while he's in the height of mistrust. The rest of the movie is about him having to atone for that mistrust. What's interesting about the film, as well as frustrating, is that it doesn't exactly allow him to atone and shows the effect that might have on his children. 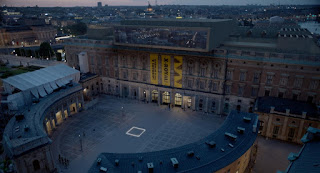 However, one of the funniest moments in the film comes from Christian's mistrust. It involves his relationship with Anna, a journalist, played by Elisabeth Moss (The Handmaid's Tale and Mad Men) who initially interviews him. She gives a funny performance as a woman who becomes infatuated with Christian and instigates a very awkward tug-of-war over a condom. It made me laugh. She also has an interesting scene opposite a monkey too, which shows the slight absurdity Östlund has here.