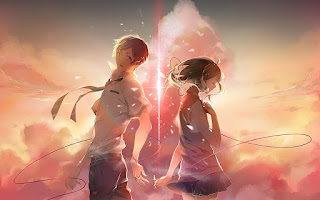 This film was submitted last year to the 89th Academy Awards for Best Animated Feature. Some thought it would get nominated. The Los Angeles Film Critics Association named it Best Animation in 2016. It also made a killing in the international box office. In terms of Japanese anime, it is one of the most successful, having made over $350 million in the international box office, which is better than any Hiyao Miyazaki film and it's remarkably better than most, live-action foreign films. It puts the film in the top 20, if not top 10 of most successful foreign films of all-time. Unfortunately, its record-breaking, financial status didn't help it here in the United States. Domestically, it had some ripples, but it was ultimately a minor splash.

The movie is about two teenagers, a boy and a girl in Japan who wake one day and realize they have swapped bodies. The boy is Taki and he lives in the city. The girl is named Mitsuha and she lives in the country. Basically, Taki's mind is put in Mitsuha's body and Mitsuha's mind is in Taki's body. There have been several films that have utilized the body swap idea. My favorite was the TV series Quantum Leap, which had a unique spin on the idea with its main character, Sam Beckett.

The first time, Sam switched places with a woman it was played for laughs. It's similarly done here when Taki realizes he now has breasts and when Mitsuha realizes she has a penis. Yet, writer-director Makoto Shinkai, adapting his own novel, moves past it rather quickly and avoids a true dive into gender issues and roles, as well as sexuality.

Given the movie's PG rating, it most likely never had any intention to go any deeper on issues of gender and sexuality, which is a clearly missed opportunity because I don't get what the point is otherwise. The film allows the two characters to get to know each other somewhat, but I'm not sure the movie ever truly allows the two fully to know what it's like to inhabit the other's body, not just on a physical level but on a social level. Sexism or gender discrimination, both positively and negatively, should have been explored. Yet, it's not.

The movie becomes about a doomsday scenario and a possible romance between Taki and Mitsuha. The movie never sold me on either though. The animation is beautiful, rendered all splendidly. I simply lost or never really built much connection to the story or characters.