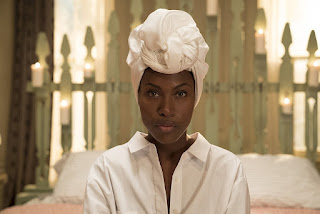 Spike Lee's feature debut was She's Gotta Have It (1986), a provocative portrayal of a young black woman and her polyamorous and queer relationships in Fort Greene, Brooklyn. It was provocative because it arrived before the wave of queer cinema in the early 1990's, a much stronger wave than the initial one following the Stonewall riots in 1969 and into the AIDS epidemic of the 80's, a wave that didn't always include African-Americans or black faces. Every now and then, queer characters would pop up in blaxploitation films like Blacula (1972) or Black Shampoo (1976). There were even landmark films like Looking for Langston (1989), Tongues Untied (1989) or Paris is Burning (1990), but none of them centered around the black female. The idea and image of the black lesbian has certainly been a rarity in the 20th century. Most people point to The Color Purple (1985), which never focused on her same-sex attraction much, or The Watermelon Woman (1996), which had the benefit of being directed by a black lesbian. However, that film didn't make the kind of splash as something like Queen Latifah in Set It Off (1996), the most mainstream depiction of a black lesbian in the past 20 years.

Since the start of the 21st century, there has been an explosion of queer characters, not only in cinema but mainly on television. Shows like The L Word, True Blood and Orange is the New Black have provided black lesbian characters that have been rather positive portrayals, meaning not problematic in the way of being fantasy for the male gaze or to titillate men, which has been a common criticism anytime a lesbian character has been rendered by a male writer or director. This is actually the criticism of Spike Lee's She Hate Me (2004), which also had at its center a black lesbian. That character and that movie have been remarked as more prurience for heterosexual guys than a honest depiction of the black lesbian experience.

This new series from Spike Lee might be his attempt to rectify those criticisms. Though his protagonist here doesn't specifically identify as lesbian, she is for argument's sake a LGBT or queer character who could certainly represent for those black women with same-sex attractions who have been historically under-represented in film and other media. With that said, Lee does avoid the trappings of the male gaze here, which he absolutely didn't avoid in his 1986 film of the same name. That film, for example, had long, lingering shots, close-ups of the main character's breasts. Lee could argue that it was for lesbians in the audience, but the shots of her breasts were never in conjunction with her attraction to women. Those shots were always while she was having sex with men. Lee does not do that here. The sexiest scene and the scene with the most care is the one between Nola and a woman, not her and the men. 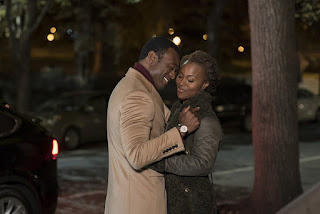 DeWanda Wise (Shots Fired and Underground) stars as Nola Darling, a 27-year-old aspiring artist and painter who lives in a really nice brownstone in Fort Greene. She hasn't really been recognized for her art or has had much luck selling it, so she pays her bills by doing odd jobs like dogwalking. What's notable is that she is currently dating three men, three different and unique black men who also live in Brooklyn but whose paths would probably never have crossed.

Lyriq Bent (The Book of Negroes and Rookie Blue) co-stars as Jamie Overstreet, the eldest of Nola's men. He's 40. He's also the wealthiest with his own office in a Manhattan skyscraper. However, he's married with a teenage son. He's separated from his wife, yet he still lives in the same house. He simply sleeps in his own isolated bedroom. He's very dapper, elegant in dress and speech, as well as just quite classy. 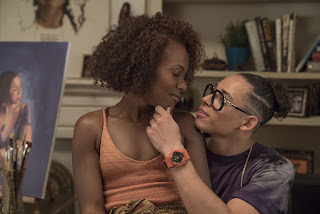 Anthony Ramos, who is probably best known for his role on the hit Broadway musical Hamilton, plays Mars Blackmon, originally played by Spike Lee in the 1986 film. Yet, here, Mars is Latino or possibly Black and Latino. He's the youngest of Nola's men. He's probably the same age as her but acts way more immature. He still lives at home. He works as a bicycle messenger and delivery boy. He looks like a throwback to the 80's and 90's with a gold chain that has his name on it and an obsession with Air Jordan sneakers. He's a loudmouth, always wise-cracking, inveigling, ingratiating and self-aggrandizing. He's a bit of a clown in that way.

Cleo Anthony (Extant and Transparent) also co-stars as Greer Childs, a gorgeous half-black and half-French model who does his own photography. Age-wise, personality-wise and money-wise, he's somewhere in the middle of Nola's other men. He has a similar artistic sense as her. In terms of dating habits, he's also similar to Nola in that he has a bevy of beautiful women whom he's probably romanced in one way or another. 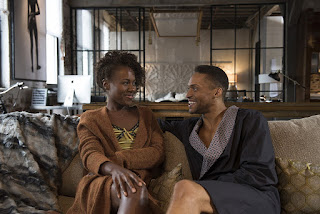 This series purports to be about a polyamorous relationship. In a broad sense, this series could be a display of polyamory, except there's one problem or perhaps several. Polyamory can be generally defined as sexual or romantic relationships between people who don't practice monogamy. Polyamory is simply non-monogamy or non-exclusivity to one sexual or romantic partner. This is not to be confused with those who date multiple people in search of one singular partner to eventually marry, although sometimes polyamory can seem that way. Polyamory involves one person having sexual relations with multiple people in a parallel fashion or sometimes simultaneously. The most popular example is a threesome or triad, sometimes called a ménage à trois. The key distinction is that each of those multiple people should be aware of each other at a minimum and agree to the shared relations at maximum. That is not the case here.

There have been many films and TV shows where someone is having sex with multiple people but often it's through adultery or cheating, meaning the sexual relations are kept hidden or secret from one or more of the partners involved or connected. If the multiple people don't know about each other, that isn't true polyamory. That's cheating essentially and that is what's happening in this series. Nola is having sex with these three men and neither of whom know about each other, which isn't the case in the 1986 film.

Dear White People was a 2014 movie that was adapted into a TV series for Netflix, which came out earlier this year. Its creator Justin Simien expanded the original story and characters to fit into ten episodes. Spike Lee did the same thing here, sort of. In order to expand, Lee needed to stretch something. He needed an arc for Nola to build. Unfortunately, Lee chose the idea of Nola keeping her sexual relations secret from one another and having the men not know each other.

This ended up doing two things. Number one, it kills the idea of this being a true polyamorous relationship. Number two, it weakens the character of Nola because instead of being the strong character in the 1986 film who wasn't afraid and who was more secure, Lee turns Nola into a nervous wreck who's running around worried that the men are going to find out about each other. Literally, Episode 6 is Nola running around her debut at an art gallery worried her men will find out about each other and it only makes her character weak. If one wants to see better and more effective portrayals of polyamory, check out HBO's Big Love or A Home at the End of the World (2004).

When expanding his film, it doesn't seem like Lee and his writers put much thought into it, at least not as much thought as Simien and his writers. Dear White People had a good story and great characters that got deeply and further developed in the series. She's Gotta Have It didn't have a good story but it did have great characters. However, only a couple really get deeply and further developed. In fact, Mars Blackmon and Greer Childs get short shrift overall. Aside for some superficial things, the show doesn't really dig into their lives all that well.

The exception is Jamie Overstreet. The show does dig into his life and we spend so much time with Jamie's wife, Cheryl Overstreet, played by Sydney Morton, that we really get to know her and what she's going through. We only get a couple of scenes with Jamie's son, Virgil Overstreet, played by Brandon Niederauer, but it's enough to really get to know him and what he's going through. In fact, the scene between Jamie and Virgil is probably the best scene in the whole series. Episode 5, which features that scene, is probably the best episode in the whole series, mainly because it feels like something out of Dear White People.

Episode 4 is the second best episode overall. It's the episode where Nola deals with her same-sex attraction and hooks up with Opal Gilstrap, played by Ilfenesh Hadera (Billions and Show Me a Hero). Opal is a lesbian who is older, probably around the same age as Jamie. She has a young daughter. She's a horticulturalist who works at a plant nursery. She is no question the best character in this show. 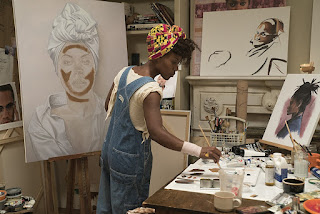 I wish more of the series was about Opal. Instead, Lee derails the train by devoting an entire episode on his extreme thoughts about gentrification and his wrongly equating it to Black Lives Matter and even the history of Native Americans. In February 2014, Lee was at Pratt Institute where he ranted about gentrification in his hometown of Brooklyn where he complained about the schools being better and the streets being cleaner and safer. He kept repeating that garbage was being picked up as if that is some crime. His worst complaint is that someone complained about his father's music being too loud, but Lee has the audacity to equate that to Black Lives Matter or the removal of Native Americans. It's preposterous on its face and offensive at its worst.

It all comes to a head in Episode 9 when a homeless character named Papo, played by Elvis Nolasco, is arrested for vandalizing the stoop and door of a white woman who lives next to Nola. Nola and the others defend Papo calling him the mayor of the neighborhood. Yet, if he's so beloved, then why is he sleeping on the street? Why hasn't anyone in the neighborhood taken him in? Lee uses Papo as a straw man in a gentrification argument that doesn't take in the nuances and the shades of grey. It was frustrating to watch.