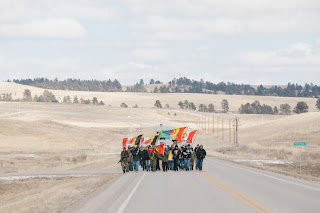 Director Jeremy Williams followed George Dull Knife for six years. It all started when George was 14, a spirited teenager and a member of the Lakota tribe, living on the Pine Ridge Indian Reservation, in Kyle, South Dakota. George points out that Kyle is a rural town with very little in terms of development, commerce, banking or job opportunities. All he sees are drugs, alcohol and gangs, along with violence. He's raised by his elderly father, Guy Dull Knife, a Vietnam veteran who has 13 children and several grandchildren at this point. George's mom left when George was small. She's still alive but reportedly was lost to drugs and alcohol.

This ITVS documentary is basically a coming-of-age story that checks in on George as he joins an organization called the American Indian Movement, or AIM. It's an activist group that pushes to address social issues like alcoholism, unemployment, racism, police harassment and other government abuses against native or indigenous people. This movie touched upon some of those issues very briefly, too briefly, but enough to show some parity to the Black Lives Matter Movement this decade or even the Civil Rights Movement of the 1960's. However, the main focus of this movie is the issue of alcoholism.

Specifically, the issue is the legalization of alcohol sales, which at the time of this documentary was illegal on the Pine Ridge Indian Reservation. The reservation lies in the southwest corner of South Dakota. It borders the northwest corner of Nebraska. On that border, there sits an unincorporated town called Whiteclay. Because it doesn't technically exist in the reservation, thanks to President Theodore Roosevelt, Whiteclay can sell alcohol. In fact, the only thing in Whiteclay are four liquor stores there for the singular purpose of selling alcohol to the Lakota.

The Lakota tribe attributes a lot of crime to alcohol-use and abuse, so the solution of AIM is to protest the liquor stores, but this usually only leads to arrests of the protesters and violence breaking out. AIM wants to maintain the tradition of alcohol prohibition. However, the Lakota tribe under new management decides to vote on legalizing alcohol sales within the reservation. We see George speaking out against this. 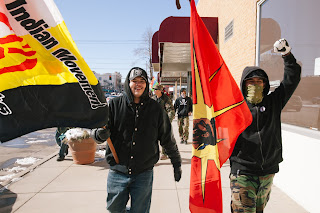 It's understandable why Williams' documentary wants to limit this movie to George and Guy's points of view, but there is an argument for the legalization of alcohol that this documentary refuses to depict. This documentary isn't comprehensive in various other ways. AIM as an organization isn't given its proper due. It's so much more than just battling liquor stores, but we don't see that here.

The movie very casually mentions that the dropout rate for students at Little Wound High School is 70-percent, but it doesn't go any further. The movie doesn't even examine how well George or his siblings did in school. It seems like he's a good student, thanks to the guidance of his father, but is there nothing more to say about the education system on the reservation? Shouldn't that be more of a priority than fighting liquor stores?

The movie follows along as the Lakota tribe and AIM commemorates the 40th anniversary of the Wounded Knee incident in 1973. All we get though of the actual incident is a testimonial from Guy Dull Knife and some animation. This incident was highly covered in the media, even resulting in a Native American protest at the 45th Academy Awards. Yet, this movie includes none of that media or really none of the context.

Again, I don't mind that this movie wants to remain within the point of view of its teenage protagonist, George Dull Knife, but even when it comes to that, the documentary is lacking. Aside from his interactions with his elderly father, we never see George having any kind of conversation with anyone his own age. He must have friends, but we never see him talking to or hanging out with any of them.

When George is 18, which is in 2014, he leaves South Dakota and lives in California for some time. Yet, we never see any footage of him in California. We have no clue what he did there. We don't know what he did for work. We know he's an okay mechanic, having fixed up his dad's pickup truck, but whether that was his job in California or not is anyone's guess. The filmmakers clearly had no interest in interrogating that California sojourn, and it's only indicative of several gaping holes this movie leaves totally unfilled. 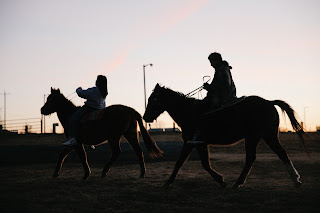 The movie ends with an epilogue in Standing Rock, the reservation in both North Dakota and South Dakota. Those who are savvy with the news will see the date of December 2016 and know what's happening, but again Williams' documentary provides no context and no explanation of what's going on there or what the issue at hand is. There are no specifics given. We just see that George is there and it's just meant to be this hopeful note for George to end on, but it's not enough.