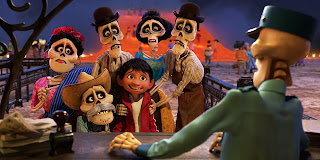 Lee Unkrich directed this feature with Adrian Molina. Unkrich won the Oscar for Toy Story 3 (2010) and this film is very much in that same vein of childhood adventure leading to lessons of family and togetherness. This movie isn't as good as Toy Story 3 or other recent Pixar films like Inside Out, Up or Wall-E. For example, Toy Story 3 was better because the adventure felt more exciting, more dangerous. Plus, its lesson at the end was a bit more bittersweet because it was about letting go of something, acknowledging true loss and having to move on. This movie is about the Mexican holiday, Dia de los Muertos, or Day of the Dead, which is typically celebrated on or around Halloween. It's a time to pray for and remember friends and family who have died, as well as help support their spiritual journey. Obviously, Mexico is a very Catholic country and thus this movie has a strong sense of the afterlife, and how the afterlife connects with the living, so in a way true loss or moving on isn't much of a factor here.

During Dia de los Muertos, people build a private altar called an ofrenda. The ofrenda is basically a table lined with the favorite foods of the deceased, as well as other gifts and offerings to the deceased. A trail of Aztec marigolds, the flower petals, lead to the ofrenda. What's most important are the pictures of the deceased, which begs the question of what was used prior to the invention of the camera.

In the movie, the premise is that the deceased are souls who live in this beautiful city that seems to be neither Heaven or Hell, but a colorful netherworld where all the dead live. Every single dead person is represented as a walking-and-talking skeleton, no skin but with hair on their heads and whatever clothing. This is probably to honor the Mexican calavera, which is that of a human skull made of sugar, but it did seem odd that every dead person was a skeleton with eyeballs. There was no explanation as to why they were represented that way.

During Dia de los Muertos, the deceased can crossover into the world of the living using a bridge of marigolds, only if the deceased's picture is on someone's ofrenda. If not, they remain stuck in the netherworld. It's funny to see that at the bridge is a checkpoint, similar to the checkpoints between the United States and Mexico. Magically, the deceased aren't allowed to step on the bridge if no one has their picture on an ofrenda, so the checkpoint technically isn't necessary. It's clearly there perhaps to make some commentary on immigration and the U.S.-Mexico border issue, and maybe that commentary is President Trump's wall is also unnecessary. 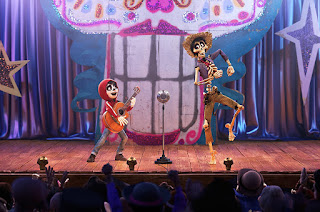 Gael García Bernal (Babel and Y Tu Mamá También) stars as the voice of Héctor, a deceased person who is trying to crossover but he can't step on the bridge or even get past the checkpoint because no one has put his picture on an ofrenda. His immediate family can crossover but of his living relatives, no one knows he existed, except for one person but that person is forgetting because it's been so long. It's been at least two generations, going on three generations. If that person forgets Héctor, then he disappears from the netherworld. It's not clear where he goes because the movie doesn't distinguish Heaven or Hell. He just ceases to exist even in a spiritual form, which conflicts with certain Biblical teachings.

This is, however, the stakes that drive a large chunk of the film. This ceasing to exist even in spiritual form reinforces the value of memory, but there comes a flaw in the movie's logic. In the town of Santa Cecilia, there lives the Rivera family. The Rivera family is a family of shoe-makers. Their shop is called Familia de Zapateros. The matriarch is a very elderly woman named Mamá Coco. She's confined to a wheelchair and suffers from Alzheimer's.

Anthony Gonzalez, a child actor, also stars as the voice of Miguel, the great grandson of Mamá Coco. He's probably around 10 years-old. He shines shoes in the local plaza, but his family wants him to work in the shoe factory, along side the rest of his relatives. However, Miguel wants to be a musician like his favorite musician, Ernesto de la Cruz, voiced by Benjamin Bratt (Star and Law & Order). Unfortunately, because Mamá Coco's father was a musician who walked out on the family, the entire family hates music, particularly Miguel's grandmother called Abuelita, voiced by Renee Victor (Weeds and ER).

Miguel is determined to become a musician, despite what his family says. A magic guitar sends Miguel to the netherworld where he decides to get the blessing of Ernesto who died in 1942 and who is still a famous person in the afterlife. Much of the adventure is Miguel avoiding his living and deceased relatives who don't want him to pursue music and trying to find Ernesto.

The aforementioned flaw is that on the Rivera ofrenda, Miguel sees the photo at the very top is one of Mamá Coco as a baby with her parents. Coco's mom is Mamá Imelda, voiced by Alanna Ubach, but Coco's father has his picture torn, so we can't see his face, but, due to his clothing and unique guitar, Miguel believes Ernesto is Coco's father and his great great grandfather. The flaw though is there are no other pictures above that one of Coco. All the other pictures are below Coco on the ofrenda and are relatives born after her or that are her descendants, but what about all those that came before her? Surely, she has ancestors that go further back. What about them and how far back do you go? Technically, every person should have pictures of Adam and Eve on their ofrenda.

The idea is a good one and rendered with very effective, sentimental results. It's difficult to hold back tears at this movie's musical conclusion and the signature song "Remember Me" by Oscar-winning songwriters Kristen Anderson-Lopez and Robert Lopez. It is an emotional gut-punch. Yes, we should remember our lost loved ones. Forgiveness is also an important element, but it would be impossible for this family to remember every single dead person, especially ancestors, even if it means they disappear from the amorphous afterlife.

The short film before this feature is Olaf's Frozen Adventure, which was better than the feature itself. It was funnier for sure. However, this movie does put to the screen like Moana people of color, in this case Latinos, which certainly places it above a lot of the other fare this year. Lastly, the animated doilies at the top of this film are beautiful and clever.