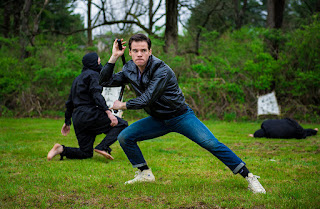 The World Premiere of this movie is at the Portland Film Festival. This goofy pastiche follows two, similar comedies at the Portland festival screened last year, Spaghettiman, a spoof on super-hero movies, and Neil Stryker and the Tyrant of Time, a Mel Brooks-like riff on science-fiction adventures. This movie is in that same vein, which is also next of kin to something like Sharknado 5: Global Swarming, except not as flamboyant. It's the same kind of silliness though that embraces schlocky. It's a movie that doesn't care if audiences can see the seams or the patchwork because really that's all it is. It's patchwork.

It's based on a 2011 short film that writer-director and then student, Brendan Steere shot on actual 16mm. That short film was an imitation of the trailers that Quentin Tarantino and Robert Rodriguez put in between their double feature Grindhouse (2007). That double feature was a homage to the exploitation flicks and cult films of the 1960's and 70's. Yet, Tarantino and Rodriguez are old enough to have seen those films and have genuine nostalgia to want to recreate their experience. Steere most likely aped it because he thought it looked cool or like most millennials or hipsters wanted to jump on the nostalgia bandwagon.

In any sense, the short film was an empty gimmick. Thankfully, this extended movie, which barely achieves the feature-length standard, doesn't fall prey to that same gimmick. There are no scratches on the film, or at least they're not as pervasive as in the short. What also supremely saves this feature from its own schlock and gimmick is the better performance of its lead actor. 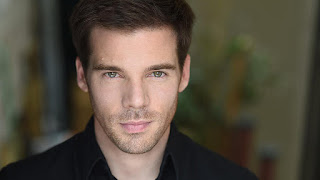 Gregory James Cohan stars as Doug Jones, a priest at some church in New York. Matt Ziegel played the same character in the short film and besides being distracted by his approximation to Luke Wilson, Ziegel does not give a good performance. Good acting is often not required in so-called "grindhouse" films, but it certainly helps, which is why Cohan here is literally a godsend.

Cohan nails perfectly the conflicted faithfulness and idiotic comic happenstance that his character faces with equal aplomb and seeming effortlessness. His commitment to the character and to the bit is incredible. Considering where this material goes, Cohan is so exact a fit for either dutiful religious man, dear in headlight or sexy smolder. Yes, he's good looking, but he really is funny every time he needs to be. Even his over-acting and melodrama work. In fact, the movie only works when Cohan is on screen. It doesn't when he's not. 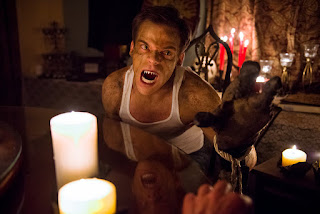 Going off the title, I thought this movie would be a cross of The Wolf Man (1941) and Anonymous Rex (2004), but this movie is more or less an excuse for Steere to do a round robin of various genre styles from the 60's and 70's, but with effects cobbled from Barney & Friends and whatever excuse to squirt as much buckets of fake blood as possible. It's super-ridiculous, cheesy and a complete mockery but Cohan's performance and his chemistry with co-star Alyssa Kempinski playing Carol, the hooker-lawyer who speaking of which could give Bruce Lee a run for his money, maybe, is funny. I did laugh, especially at the Gandhi quote used at the end. 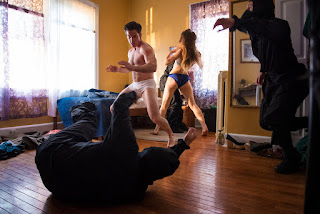