Movie Review - The Killing of a Sacred Deer 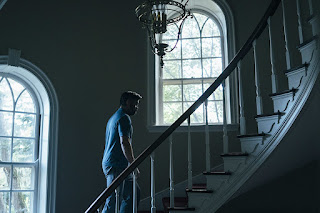 Yorgos Lanthimos is a filmmaker whose sensibilities seem to be very cold and clinical. This could be said of a lot of filmmakers, particularly European filmmakers and those who draw inspiration from European filmmakers like Michael Haneke. David Fincher might be considered one such filmmaker. Fincher, however, keeps his films grounded in reality with consequences that feel of this world, even in their extremes. This is not the case with Lanthimos. It might seem ostensibly that his films are grounded in reality with consequences that feel of this world, but they are not. His last film The Lobster had a bit of a science-fiction premise, which circumvented the science or even the logic of it. One simply had to suspend disbelief, which is fine, if the filmmaker doesn't do things to make the whole thing collapse. My review of The Lobster shows how I feel that film collapses. This film doesn't quite collapse the same way, but it is somewhat undermined. This film does have a supernatural premise, which Lanthimos circumvents and just expects us to suspend disbelief, which is fine, but the cold and clinical manner of this film doesn't help. It did garner laughs in the theater, but it only leaves an emptiness as one walks away from this movie.

Colin Farrell (The Beguiled and The Lobster) stars as Steven Murphy, a cardiologist and heart surgeon in Cincinnati, Ohio, who's married with two children. Every now and then he secretly meets with a 16-year-old boy. The boy is the son of a patient who died while Steven was operating on him. Why Steven does this is never really stated. We assume it's due to some level of guilt. It's implied that maybe Steven was a little drunk during the operation, but Steven never takes responsibility for the patient's death. 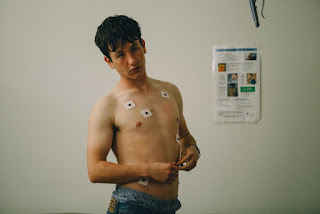 Barry Keoghan (Dunkirk and Mammal) plays Martin, the 16-year-old son of Steven's patient. Martin eventually reveals that he wants revenge and he believes that Steven killed his father. We're never given the details about Martin's father, but we have to assume that his death was definitely Steven's fault. Martin tells Steven that in order to balance things, Steven has to kill a family member, either his wife or his two kids. Martin says that if Steven doesn't kill one person within his family himself, all three will die.

Sunny Suljic plays Bob, the youngest son of Steven. One day, he wakes up and he's paralyzed from the waist down. He can't walk. He also refuses to eat. If anyone saw the horror anthology from earlier this year XX (2017), the segment directed by Jovanka Vuckovic called "The Box" had this exact idea. A curse is placed over children that causes them to stop eating until they starve to death. Martin's curse isn't just about starvation. It's just the step after the paralysis and before the bleeding from the eyes until death.

The Lobster had the extraordinary thing that people could be turned into animals. This extraordinary thing was never explained. It was just a thing that happened. Like with The Lobster, Martin's curse is an extraordinary thing that is never explained. How he's able to do it is one of those things where one has to suspend disbelief. That's already a big ask, although that's not uncommon in horror films. Whether it's zombies, vampires, or even Freddie Krueger, we're often asked to accept certain monsters with certain supernatural powers. In this case, that monster is a sociopathic but polite and well-mannered, teenage boy.

Unlike most horror films, the thrills here don't exist. Mostly, this movie is very static. Lanthimos will inject loud and almost discordant music. Ostensibly, this movie operates like Lanthimos' Dogtooth (2010) where a family is put into a horrifying situation and we are to watch how they function, but through Lanthimos' direction, none of the reactions feel authentic or genuine. Conversations one would have aren't had, so it's unclear what's really going through people's minds. Also, the aftermath is unbelievable as well. 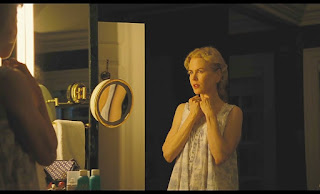 Nicole Kidman (The Beguiled and Stoker) co-stars as Anna Murphy, the wife to Steven and the mother to his children. Once she realizes what's happening, she goes to Martin. She asks for leniency, but it's obvious Martin is insane. Later, she decides that one of the children has to die to save the rest of them, but technically, she could sacrifice herself, but the fact she never does is either a failing of the character or the writing.

I lean more on it being a failing of the writing because at no point is that specific point raised. Steven, as one would expect, might have offered himself as a sacrifice, but he never does. When Anna confronts Martin, she never raises that idea, the idea that if anyone, Steven is the one who should die. Presumably, Martin and this movie want Steven to be in the same position as Meryl Streep in Sophie's Choice (1982).

If Lanthimos wanted this to be a Sophie's choice, that's fine, but where he fails is really developing or explaining that idea through the relationships with the children. It's not necessarily a contest, but something like a contest should have occurred where each child should have done something more overt to have their lives spared. This could have brought up a father's relationship with either his daughter or son. Something like this does happen in the last act of this film, but Lanthimos' direction has the actors deliver their lines in almost a robotic way as to be devoid of emotion, so it's hard to know if they even care if they live or die.

When it comes to Farrell, his performance makes sense the way it is, but for the children, for Suljic and Raffey Cassidy who plays the daughter, Kim, it only makes less sense and doesn't help us to connect to the characters. Because of which, it doesn't matter to the audience which child dies. 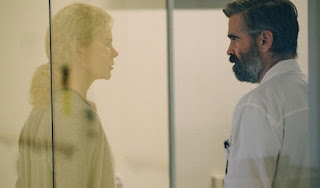 The way this movie ends it also doesn't matter which child dies in the eyes of the law. The last scene of the movie is the family after one of them has been killed, clearly murdered, yet they're sitting in a diner, and the only thing I could think is why aren't they in jail? How was a child's murder basically brushed off legally speaking? It just makes Lanthimos' reality more unreal when things like that are brushed off.